As part of Mexico’s Energy Reform, on August 12, 2014, a new electricity law became effective. Prior to the law’s enactment, the Mexican electric industry was governed by a restrictive legal framework that limited private sector participation and reserved most of the market for the stateowned Federal Electricity Commission (Comisión Federal de Electricidad, CFE). Now, the generation and wholesale of electricity takes place under a regime of free enterprise and open competition.

Under the new electric industry regime, the National Energy Control Center (Centro Nacional de Control de Energía, CENACE), the regulatory agency managing the wholesale electric market, may call for competitive bidding processes in which (i) qualified users and power suppliers (including CFE-affiliate companies providing basic and qualified services) may present offers to purchase power, capacity and clean energy certificates (CELs, and along with power and capacity, the “Products”); and (ii) generation companies (“Generators”) may present offers to sell Products. In this scheme, a power clearinghouse will be responsible for allocating offers to purchase and offers to sell, executing PPAs with both ends of the market.

Mexico’s Third Long-Term Power Auction resulted in a power + CELs weighted average price of US$20.57 MWh, one of the lowest on record, and a total estimated investment of US$2.369 billion over the next three years.

On March 15, 2018, CENACE published the announcement of the Fourth Long-Term Power Auction, which will award PPAs with a term of 15 years (and 20 years in the case of CELs). On March 28, the Bidding Guidelines were published.

The Bidding Guidelines provide that market participants interested in purchasing Products must present a registration application and an offer to purchase before CENACE.

Generators interested in the sale of Products must submit a pre-registration application on or before September 6, 2018. This pre-registration application must include, among others, (i) proof of payment of applicable fees for participating in the auction, (ii) the delivery of a stand-by letter of credit as guarantee of offers submitted (SBLC), (iii) proof of financial capacity, (iv) experience in the electric power sector and (v) proof of the technical feasibility of the generating power centrals.

After pre-registration applications are submitted, CENACE will have 10 business days for their analysis, review and approval. Additional information from Generators may be requested. Results of pre-registration will be published on October 26, 2018.

Pre-registered Generators must present their offers to sell on or before October 31, 2018, including only financial information therein.

As mentioned above, a clearinghouse structure has been adopted for allocating buy and sell offers, executing PPAs with both ends of the market.

In short, the clearinghouse will be a neutral agent, processing payments from purchasers and to awarded sellers and receiving and holding guarantees from both ends.

The clearinghouse has no financial responsibility before the parties, but specific procedures are established in applicable regulations to prevent damages to all parties caused by a failure of a buyer or seller to perform its obligations under the PPAs. 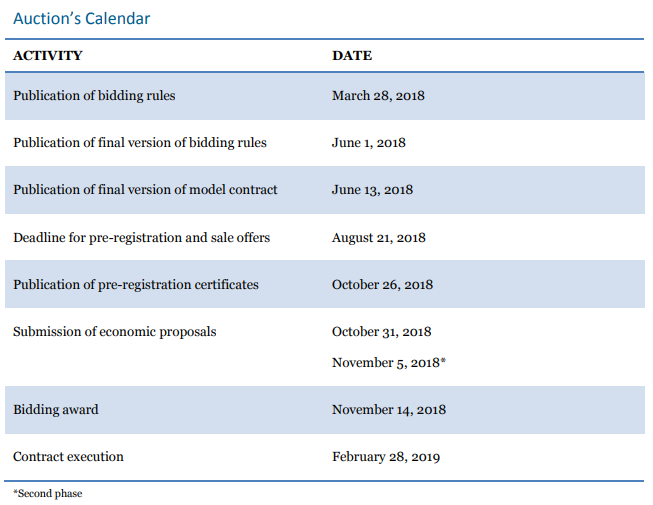