On September 4, 2020, the U.S. Environmental Protection Agency (EPA) published two Federal Register notices regarding the risk evaluations for the 20 high-priority chemicals designated in December 2019. In the first notice, EPA announced the availability of the final scope documents for the risk evaluations to be conducted under the Toxic Substances Control Act (TSCA) for the 20 high-priority substances. 85 Fed. Reg. 55281. The scope document for each chemical substance includes the conditions of use (COU), hazards, exposures, and the potentially exposed or susceptible subpopulations (PESS) that EPA plans to consider in conducting the risk evaluation for the chemical substance. In the second notice, EPA announced the availability of the final list identifying manufacturers subject to fee obligations for EPA-initiated risk evaluations under TSCA Section 6. 85 Fed. Reg. 55283. We will supplement this memorandum next week after we have reviewed the scopes in detail.

As reported in our December 20, 2019, memorandum, EPA published the final list of high-priority chemicals on December 20, 2019. The 20 chemicals consist of seven chlorinated solvents, six phthalates, four flame retardants, formaldehyde, a fragrance additive, and a polymer precursor: 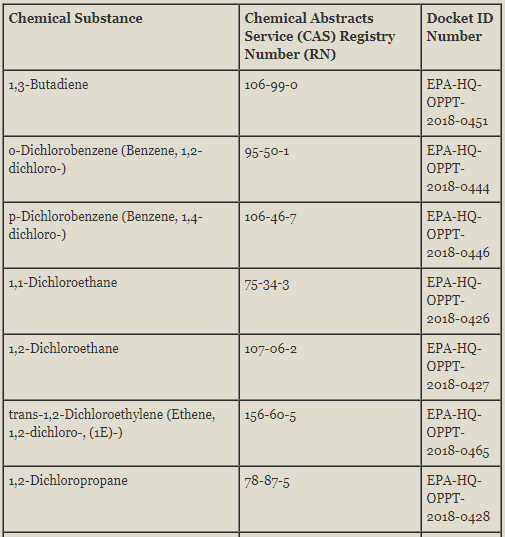 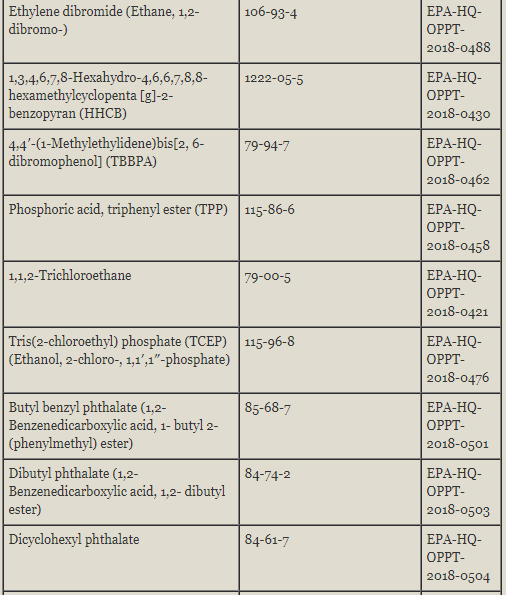 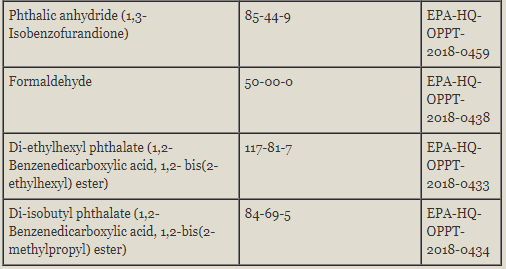 Comments were received during two 45-day comment periods following the announcement of the draft scope documents for the risk evaluations to be conducted for 13 of the 20 high-priority substances and the remaining 7 of the 20 high-priority substances. According to EPA, comments addressed the general approach to the risk evaluation process (e.g., collection, consideration, and systematic review of relevant information), the specific elements of the scope documents (e.g., hazard, exposure, and PESS), information specific to the chemical substances (e.g., relevant studies, assessments, and COU), and topics beyond the draft scope document phase of the process (e.g., risk management). EPA states that it considered those comments, as applicable and appropriate, in developing the final scope documents. EPA has published a response to comments document that contains a comprehensive summary of and response to public comments received on the 20 draft scope documents.

EPA states that based on public comments received, it was able to update COU presented in the draft scope documents and accept additional data or information from stakeholders that was useful in determining the final the scope of the risk evaluations. In addition, EPA considered public comments to inform better the exposure pathways, routes, receptors, PESS, and hazards that EPA plans to consider in the risk evaluations for the 20 high-priority substances. EPA notes that as a result of the Ninth Circuit Court of Appeals’ decision in Safer Chemicals, Healthy Families v. U.S. EPA, 943 F.3d 397, 425 (9th Cir. 2019), “EPA will no longer exclude legacy uses or associated disposal from the definition of ‘conditions of use.’ Rather, when these activities are intended, known, or reasonably foreseen, these activities will be considered uses and disposal, respectively, within the definition of ‘conditions of use.’”

EPA states that it was asked whether a manufacturer that has ceased manufacture of one of the 20 high-priority substances prior to the cutoff date for ceasing manufacture or import of a chemical substance (other than manufacture in the three categories impacted by the planned regulatory change), and that also commits to not manufacturing the chemical in the future five years, other than in those same three categories, should be subject to fee obligations. EPA responded that in light of its rulemaking announcement, it does not expect to identify entities who otherwise meet the criteria for “cessation” except for manufacture or potential manufacture in one of the three categories -- and who certify as such in the “Additional Information” field in CDX -- on the final lists of responsible fee payers. Finally, entities had the opportunity to certify as to whether they meet the definition of a “small business concern” as defined in the Fees Rule and qualify for an 80 percent reduced fee amount.

According to EPA, the final list of manufacturers differs from the preliminary lists for several reasons. For example, many Chemical Data Reporting (CDR)/Toxics Release Inventory (TRI) manufacturers identified on the preliminary list had either ceased manufacturing prior to the cutoff dates or were not manufacturers (or importers) of the chemical substances. EPA did not include such entities on the final lists. Other entities from the preliminary lists, in accordance with the planned regulatory change, that only manufactured (or imported) chemicals as a byproduct, impurity, or in an article and certified as such, were not included in the final list. EPA states that other entities that were not included on a preliminary list, such as importers of chemical substances for laboratory or research and development (R&D) use that imported volumes below the CDR 25,000-pound threshold, self-identified as a manufacturer (including importer) during the reporting period and were therefore included on a final list. According to EPA, the only company that self-identified for tris(2-chloroethyl) phosphate (TCEP) imported a very small quantity in 2019 for R&D use only. EPA states that it used the discretion offered by the TSCA fees rule not to collect a fee from this one company. As a result, there are no fees associated with the risk evaluation for TCEP.

EPA states that “[i‌]n recognition of the unprecedented and unforeseen challenges to the economy as a result of public health emergency, the Agency is exploring options for payment flexibilities, including payment plans and extended due dates for fees.” EPA notes that manufacturers may also form a consortium to pay fees. The consortium must notify EPA that a consortium has formed within 60 days of the publication of the final scope of a risk evaluation. Once established, the consortium would determine how the fee would be split among the members, and ultimately paid to EPA. Information on forming a consortium is available in our March 2, 2020, memorandum, “The Essential Value of Forming TSCA Consortia.”