The NSW Government has released the draft Building and Construction Industry Security of Payment Amendment Regulation 2019 (the Draft Regulations) for consultation.

In our September 2018 article Security of Payment amendments released in NSW – the good, the bad and the controversial, Mills Oakley prepared a detailed article regarding the NSW Government’s proposed amendments to the Building and Construction Industry Security of Payments Act (1999) (the Act).

Today’s quick update will highlight what’s new in the Draft Regulations and the areas in which the new offences seek to ‘pierce the corporate veil’ and strengthen the enforcement regime.

The three highlights of these amending Regulations are:

The Draft Regulations (Reg.5A) target section 34D of the Amending Act in what it describes as ‘Executive Liability Offences’.  The note in the draft Regulations relevantly confirms:

“Section 34D of the Act provides for the personal liability of directors for certain offences committed by a corporation”.

There is a schedule of fines being both on a corporate level as well as upon an individual. This represents a significant development in the Security of Payment regime with individuals no longer able to be protected behind the corporate veil in respect of certain offences.

Having said that, we consider it unlikely that the fines will provide anything other than a modest deterrent factor. Problems with fraudulent or inaccurate supporting statements and widespread non-compliance with the retention requirements are unlikely to be remedied by these amendments alone.

The corporate fines imposed for offences under the Act and Regulations range between $5,500 and $11,000, together with fines for individuals ranging between $1,100 and $2,200. 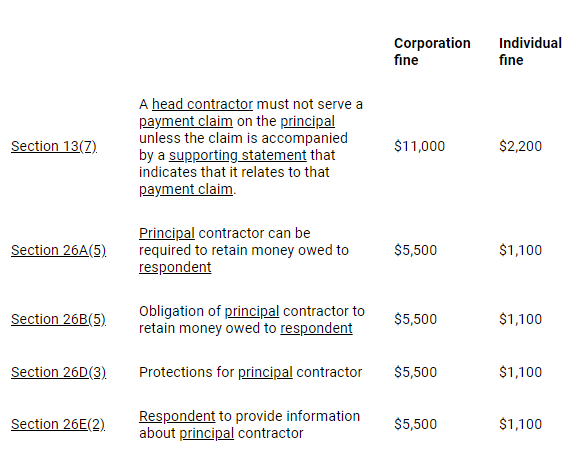 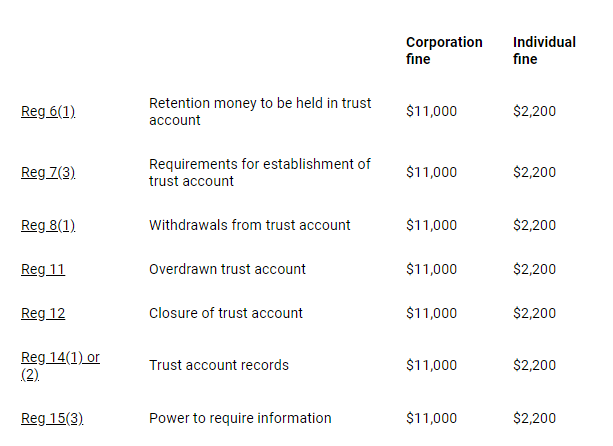 Some possible penalty notice scenarios under the draft Regulations

After the Draft Regulations are passed, the following scenarios may result in the penalties outlined above:

A contractor’s Payment Claim which:

Failing to comply with a direction of an adjudicator and not providing the claimant with “the identity and contact details of any person who is a principal contractor in relation to the claim” under this section may result in the respondent incurring a $5,500 penalty.

A head contractor failing to report within 14 days

If a head contractor fails to advise the Secretary of the closure of a retention money trust account in writing within 14 days, they may be fined $11,000 for the failure.

Regulation 15 grants power to any authorised officer (under s.36 of the Act) to direct that a head contractor or sub-contractor (as well as any approved authorised  deposit-taking institution) provide the office with any information sought in respect of the following matters:

Failure to comply with a direction under Regulation 15 to provide any required information in writing to the Secretary within a period of 7 days after the direction is given under regulation 15 (or a longer period if specified), may also soon result in a penalty of $11,000 being imposed.

The NSW Government has determined there is a public consultation period until 5.00pm 21 June 2019 and any submissions about the Draft Regulations briefly touched on above may be made here.