Deal activity has been buoyed by intense interest from international firms. Inbound activity reached an all-time high both by volume and value in 2017—a total of 253 deals from overseas investors valued at US$61.2 billion were announced over the year.

While the record deal value was magnified by French group Unibail-Rodamco’s US$24.6 billion planned acquisition of shopping mall operator Westfield Corp., a total of 12 inbound deals valued at over US$1 billion announced from Q1 2017 through Q1 2018 highlight the appetite among international bidders for high-value deals.

Another indicator of overseas appetite for Australian assets is the bidding war for 51% of Sydney Motorway Corp. and control of the WestConnex toll road project. The New South Wales government’s call for bids has attracted not only local bidders, but also foreign players, such as a consortium of partner companies from Australia, Canada and the United Arab Emirates. Final bids aren’t due until June, but if the winner is not a domestic company the likely deal total will ensure that 2018 busts 2017’s record for inbound Australian investment. 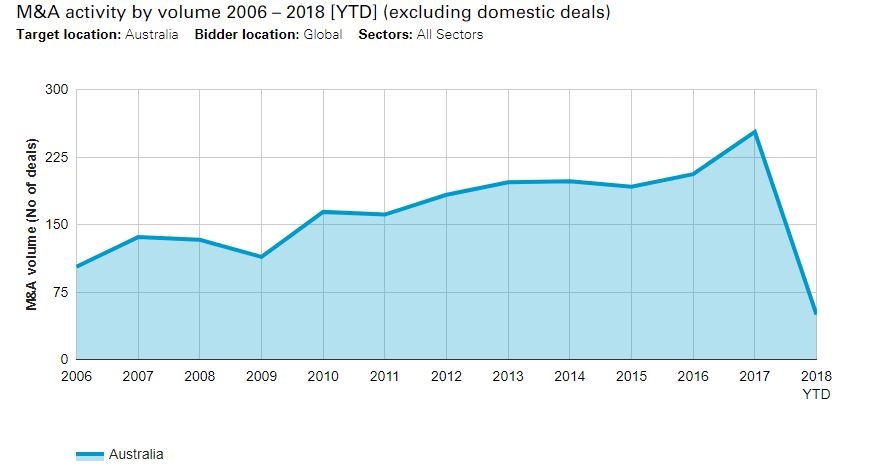 A weak Australian dollar in 2017 was one attraction for foreign dealmakers, with Australian assets trading at attractive valuations for investors deploying US dollars, sterling and euros. Australian M&A also saw the benefits of new trade deals the country has finalized with major economies such as China, Japan and Korea.

Another reason for the high levels of inbound activity was Australia’s political stability relative to Europe, which saw a string of controversial elections in 2017, and also relative to the US during the unpredictable first year of the Trump presidency.

Asia’s third-richest man, Li Ka-Shing, for example, acquired Australian power provider Duet Group through a consortium led by his investment vehicle Cheung Kong Infrastructure Holdings in a US$9.8 billion transaction. The deal was part of Ka-Shing’s strategy to diversify away from Europe at a time of uncertainty.

AIA Group, meanwhile, purchased Commonwealth Bank of Australia’s life insurance business for just over US$3 billion in AIA’s biggest deal outside of its core Asian markets. The deal signalled AIA’s ambition to grow beyond Hong Kong and Southeast Asia and give the insurer a foothold in the second-largest life insurance market in the world after Japan.

Although the outlook for foreign-backed deals is positive, there is concern that some inbound transactions could face closer scrutiny from regulators.

Ka-Shing, for example, had a bid for Australia’s largest electricity operator, Ausgrid, blocked by the Australian government’s Foreign Investment Review Board (FIRB) on national security grounds. In 2017, Australia also formed the Critical Infrastructure Centre (CIC) to bring together expertise from across government to identify and manage risks to the country’s critical infrastructure. The CIC identified the telecoms, electricity, water and ports sectors as its priority high-risk areas.

FIRB has generally taken a pragmatic view on deals, clearing Ka-Shing’s subsequent bid for Duet and Chow Tai Fook’s US$3.1 billion takeover of power utility Alinta, among others. But after the blocked Ausgrid deal, there is a view among M&A investors that deals involving international bidders could be subject to delays or rejection.

Looming tax law changes in the next budget could dampen foreign interest in Australian infrastructure projects. Aiming to protect the integrity of the corporate tax system by tightening the rules on stapled structures, the government has proposed measures to limit the concessions currently available to foreign investors for passive income, including amending the thin capitalization rules to prevent foreign investors from using trusts and partnerships to convert trading income into lower-taxed interest income.

The power and utilities industry that the FIRB and CIC have been monitoring so closely has been a hot sector for domestic M&A investors, as well as those from abroad. As has been the case in Europe and the US, investor appetite for long-term yields from regulated assets has pushed up demand for power network and utilities investments. Interest in these assets from cash-rich buyers across Asia Pacific, as evidenced by the Duet Group and Alinta Energy deals, has provided a further spur for activity.

Within the power and utilities space, interest in renewables is particularly keen as Australia works towards meeting its clean energy target. The target was set by Australia’s chief scientist Alan Finkel in an independent report on the country’s electricity market. This recommendation, which has been accepted by the government, mandates that energy retailers provide a percentage of their power from low emissions sources. The mandate has prompted a flurry of activity in the renewable energy, clean energy storage and smart meter sub-sectors.

In addition to power, deal activity in the mining sector has also been high, with a cluster of megadeals in the space over the last 15 months. This has been supported by improving commodity prices as well as a strategic shake-up at some of the mining majors.

Mining multinational Rio Tinto, for example, has decided to exit the coal market and focus on iron ore, copper and aluminium. This prompted the proposed sale of Rio Tinto’s Hail Creek coal mine and the Valeria coal project to Glencore for US$1.7 billion and the divestment of Rio Tinto’s Kestrel coal operation to a consortium led by Adaro Energy in a US$2.25 billion deal. Mitsubishi Corp. and Yancoal Australia have taken similar steps, selling Coal & Allied Industries Ltd. for US$1.1 billion, also to Glencore.

In line with overall M&A activity, Australian private equity activity reached a record-high volume in 2017, with a total of 92 deals worth US$17.2 billion recorded. Private equity investors have benefitted from growing interest in Australian utilities, natural resources and energy deals. TPG Capital, Oaktree Capital Management and Anchorage Advisors, for example, were on the sell-side of the Alinta Energy deal.

Successful exits such as these have encouraged further investment interest across these sectors. EMR Capital was part of the consortium plans to acquire the Kestrel coal operation from Rio Tinto, in its largest ever mining investment. Harbour Energy, an oil and gas business backed by US-based buyout firm EIG Global Energy Partners, had approached listed energy company Santos in an attempt to build one of the largest independent oil and gas groups outside of the US. Despite Harbour repeatedly sweetening the deal, Santos ultimately judged Harbour’s offer too low, and broke off talks.

Outside of these large-scale energy and utility plays, buyout firms have been active players across a wide array of sectors. Firms are cash-rich, with fundraising sitting at a 10-year high. According to the Australian Private Equity and Venture Capital Association, fundraising for venture and buyout firms rose by more than a fifth in the 2016/2017 financial year, with 31 managers banking US$3.35 billion between them over the period.

The deal momentum created by a combination of cash-rich private equity firms, strong inbound appetite and transformation within the energy and utilities sectors has continued into 2018. Yet a degree of uncertainty around Australia’s long-term energy policy, along with a perception that regulators may take a more hawkish stance on foreign investment in key sectors, pose potential risks to future dealmaking.