The Fair Work Commission (FWC) in handing down its minimum wage review decision has rejected the ACTU’s push for a ‘living wage’ as part of its broader Change the Rules campaign.

A summary of the key wage increases that will apply from 1 July 2019 is as follows:

We discuss some of the key aspects of the minimum wage review below.

A requirement of the Fair Work Act (FW Act) is that the FWC conducts a review of the national minimum wage (NMW) and minimum wages in modern awards each financial year.

The FWC conducts each review within the statutory framework of the FW Act which includes consideration of the following:

In the context of a review both the modern award objective and the minimum wage objective require the FWC to take into account a range of specific considerations including:

The modern award objective also includes ‘the need to encourage collective bargaining’ (section 134(1)(b) of the FW Act).

In the absence of any primacy or weighting being attributed to these three objectives the FWC’s task is an evaluative task by the Federal Court.

The FWC has summarised the practical application of its task in its 2014-2015 minimum review decision in the following manner:

“In taking into account available economic and social data, the (FWC’s) approach is broadly to assess the changes in these data from year to year and determine how they inform the statutory criteria. Put another way, and consistent with the ACCI’s submission, if there were no change in the relevant considerations from one year to the next then, all other things being equal, a similar outcome would result.”[1]

Importantly, the FW Act also establishes procedural fairness requirements for the minimum wage review that ensure that all interested parties are provided with a reasonable opportunity to contribute by making submissions to the review.

A number of parties lodged submissions with the FWC containing proposals in response to the minimum wage review.

The ACTU’s submission, consistent with its position under its broader Change the Rules campaign, sought a significant minimum wage adjustment such as to establish a modern day ‘living wage’.

In essence, the argument was that the needs of the worker do not get the attention they warrant in the deliberations in the annual wage review and that balance can be restored by focusing more on assessing the income that a working family requires to purchase the basic commodities and services that they require for a civilised existence in contemporary Australia.

The ACTU also argued that a move towards a ‘living wage’ would help mitigate widening income inequality helping to restore social mobility and once again allow Australians to believe they live in a country where everyone gets a ‘fair go’.

To achieve its goal of a ‘living wage’ it was proposed that the FWC should set the national minimum wage rate at a level which lifts a single earner couple[2] above the 60% relative poverty line which required the following:

Bill Shorten’s Federal Labor opposition supported this aspect of the ACTU’s Change the Rules campaign committing to introduce the concept of the ‘living wage’ into wage setting principles for future minimum wage reviews of the FWC as part of its comprehensive workplace relations policy that it took to the Federal election.

A table was produced by the FWC in its minimum wage review decision[3] of the wage adjustments proposed by the various parties who made submissions which is reproduced below: 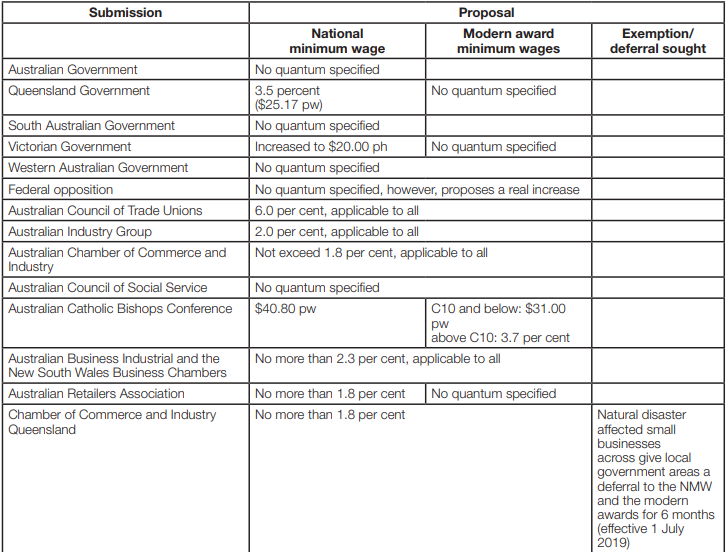 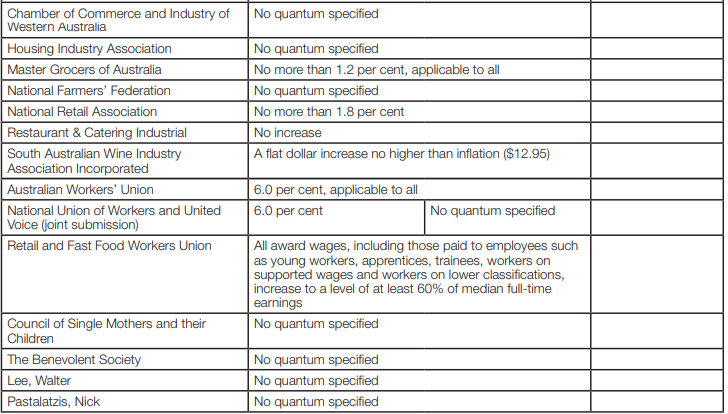 The FWC was greatly influenced by the continued positive prevailing economic conditions.

A slightly lower increase was determined to be appropriate this year than that awarded for last year (being 3.5%) having regard to several factors:

The FWC was satisfied that the increase determined upon would not lead to an adverse inflationary outcome or a measurable negative impact upon employment whilst providing an improvement in real wages for those reliant on minimum award wages (and the NMW).

In rejecting the ACTU’s submission for a significant increase to move towards a ‘living wage’ as part of its Change the Rules campaign the FWC found that such a proposed increase would if implemented:

‘run a significant risk of dis-employment and adversely affect the employment opportunities for low skilled and young workers.’

The FWC concluded for these reasons a more modest increase of 3% was appropriate.