In this article, we look at the worldwide data tracking issuance of Augmented Reality/Virtual Reality patents from the fourth quarter of 2020. As a brief overview, Augmented Reality/Virtual Reality (“AR/VR”) refers generally to a class of technologies that merge a view of a real-world environment with virtual objects and information or provide an entirely virtual environment as a user experience. AR/VR technologies are drawing renewed attention due in part to availability of cheaper and powerful mobile computing devices, faster and ubiquitous communication networks, plus the increased need for means of remote communication and collaboration in this work from home era. No longer are AR and VR restricted to entertainment and science fiction; they have now expanded into online shopping, workplace training and collaboration, healthcare delivery, and the real estate market, just to name a few. In this series, we track the growth in AR/VR patents worldwide that we expect will accompany the rapid innovation in this technology space. We highlight trends in patenting AR/VR technologies—who is obtaining AR/VR patent protection, and where. We track the various technology centers at the United States Patent and Trademark Office that handle AR/VR applications. And, from time to time, we shine the spotlight on interesting new AR/VR patents.

In the fourth quarter of 2020, the intellectual property offices around the world combined to issue over 6,700 patents related to AR/VR technologies, a huge surge from the 2,300 in Q3 and the most of any quarter overall in 2020. China surpassed the United States as the top issuer by volume, with the Chinese patent office issuing almost 1,900 more patents than the previous quarter while the almost 2,150 relevant patents issued by the USPTO was up 1,000 from Q3). Generally, there was an uptick worldwide in issued AR/VR patents. While each jurisdiction faced its own challenges responding to the worldwide pandemic, many have figured out how to return more of their examining core to work or transition to remote options. Additionally, the pandemic and social distancing guidelines have no doubt spawned numerous applications for AR/VR technologies that were previously unexplored. 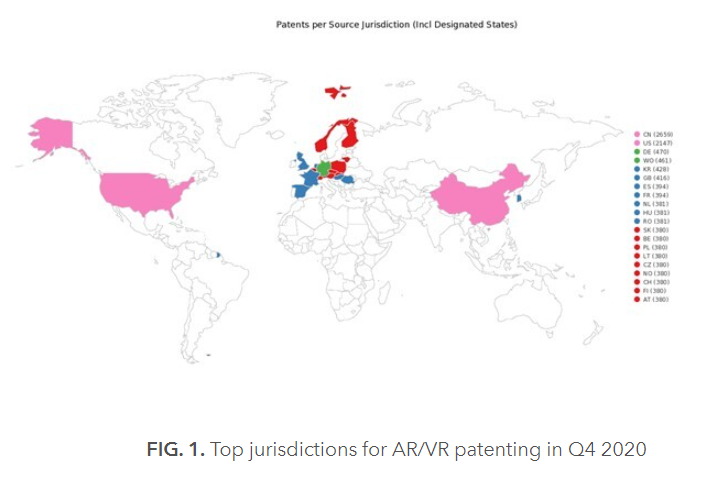 Magic Leap jump ahead of Microsoft to end the fourth quarter of 2020 as the top assignee, adding 132 new AR/VR patents to its collection, more than doubling the 115 from earlier in the year for a total of 247 in 2020. Both Magic Leap and Microsoft (who acquired more than 275 total in 2020) undoubtedly have made big strides and we look forward to seeing how their innovations are presented in future products. Not to be outdone, Porsche registered in the top 10, representing the automotive industry as a top assignee for the first time in 2020. 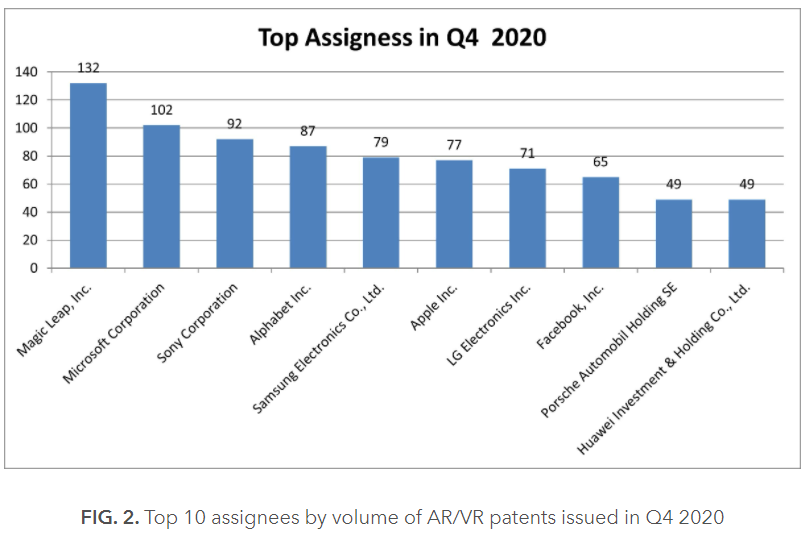 With the final quarter’s data, we return to USPTO Technology Center 2600, which handles a large percentage of AR/VR applications to look at a particular Technology Center Group. Tech Center Group 2610 handles applications specific to computer graphics processing, 3D animation, display color attribute, object processing, and hardware and memory. This group has an average allowance rate of 73.6%. For allowed applications, around 75% had previously faced rejections based on prior art under 35 U.S.C. §§ 102 or 103. Moreover, only about 25% of allowed applications had at least one Request for Continued Examination, with only one-fifth of those requiring two or more Requests for Continued Examination. Rejections under 35 U.S.C. § 101 are less abundant than other Tech Center Groups, with less than 15% of all applications facing 101 rejection in a first office action, falling down to near 5% in a final office action. The average pendency for patents issuing from Tech Center Group 2610 is 3 years, 6 months, and 23 days from filing to issuance. Lastly, applicants have had some success appealing a Final Office Action to the Patent Trial and Appeal Board. Near 70% of the outcomes on appeal were in the applicant’s favor.

Design patent protection is available in the U.S. and Canada to protect the ornamental design of an object. (Europe and other jurisdictions operate on a registration system, rather than an examination system.) Companies and inventors may choose to protect hardware or graphical user interface elements using design patents. In the final months of 2020, a smattering of companies obtained patents protecting their designs. Spigen brought in the new year with 16 patents to help protect its line of mobile accessories. Lucyd followed with 13 patents, all covering their upcoming smart glasses and a company called Arkade scored 4 patents to cover their new video game controller.

A Year in Review

While not everyone thrived in 2020, many companies working with AR/VR technologies saw the altered economy as opportunity to further their innovations, businesses, and accompanying patent protection. The possibilities for AR/VR applications are endless as more customers and companies are expanding their working and entertainment options to accommodate remote and socially distanced options. This chart below highlights some of the data gathered over the past year and we will continue tracking in 2021.

Our analysis includes a search of all patents granted around the world in the fourth quarter of 2020, from October 1 to December 31, for keywords in the title, abstract, or claims related to AR/VR technologies. We then review the data to determine which offices are issuing relevant patents and which companies are focusing on protecting their innovations in the different parts of the world. For design patents, the same search was run, however, we note that the search was limited to the United States and Canada as design protection differs worldwide.