Why Do Pension Trustees Need Insurance?

Pension plan trustees face unlimited personal liability if they act in breach of trust that causes loss to the plan. The Pensions Regulator can take disciplinary action against trustees who commit breaches of trust or pensions law.

How Can Trustees Manage the Risk Associated With This Exposure?

Generally, trustees can rely on the indemnities from the plan/ sponsoring employer and/or exoneration clauses but these types of provisions do have limitations and restrictions. In particular, trustees cannot be exonerated for breach of trust relating to investments. And an indemnity may be worthless if the employer becomes insolvent.

This is where insurance solutions can step in to protect trustees. Pension trustee liability (PTL) insurance policies have been around for over 20 years. They protect trustees and schemes against third-party claims alleging financial loss. To that extent, PTL insurance can be a highly effective method of financial risk transfer from the trustees and the plan to the insurer with the insurer standing in front of the indemnity and/or exoneration clauses (but remember to check the terms of the policy to ensure that the first port of call is the insurer rather than the pension plan or the employer).

PTL insurance can be taken out as part of a risk management tool for an ongoing plan, but it can also be used where a plan is in wind up, in order to provide run off protection for the plan trustees.

So what questions do trustees need to be asking about PTL insurance?

Would We Be Covered by Other Insurances?

But many D&O insurance policies specifically exclude insurance cover liabilities for directors who are also trustees in respect of potential exposure for pensions related issues.

It is also unlikely that other insurances taken out by the company (for example, employer's liability or professional negligence policies) will cover pension related liabilities.

What Types of PTL Policy Are Available in the Market?

Most usual are those that provide cover in relation to an active plan. Those policies usually run for a one-year period and are renewable on an annual basis.

Also available in the market are policies that provide cover in respect of plans that are in the process of being, or have been, wound up. These policies are available for periods of up to 15 years (being the "long stop" time period under the Limitation Act 1980 for most legal claims). They also cover the possibility of missing or overlooked beneficiaries who surface when all the assets of the plan have been distributed.

The cost of the insurance the premium will vary from plan to plan. It will depend upon issues like the size of the plan and claims history. Plans in wind up might find that run off insurance is more expensive. Its cost will be very much dependent upon the size of the plan and the evidence that the trustees are able to provide to the insurer to demonstrate that a thorough benefit review has been carried out, meaning there are unlikely to be any hidden liabilities within the plan (for example, arising out of a failure to equalise for normal retirement ages) and that the plan has been well managed in the past.

Who Should Be Covered?

What Type of Liabilities Should Be Covered?

The PTL policy should indemnify the trustees and the plan against any loss suffered as a result of a claim by a third party for wrongful acts.

What Type of Claim Should Be Covered?

PTL insurance operates on a "claims made" basis; that is to say, the policy covers claims made against an insured during the policy period regardless of when the event giving rise to the claim occurred.

A PTL policy should cover, as a minimum, claims made against the trustees arising from:

Do We Have Enough Insurance Cover?

But trustees need to bear in mind that the limit of indemnity for an ongoing plan is a yearly "pot" limit in respect of all claims in that year (including costs which can be a very significant amount) which is available to all the insured parties. So it can quickly be eaten up by a big claim in a policy year.

There is likely to be a single claim limit and an aggregate limit on a run off policy so the terms will need to be carefully considered.

A retention or deductible an uninsured excess may apply to any claims against the employer, corporate trustee or plan. Claims against individual trustees are not generally subject to an excess.

What Other Covers May Be Available Under the Policy?

It is generally possible for trustees to buy extensions of the policy to cover issues such as:

What Liabilities Are Typically Excluded From the Insurance Cover?

Of course, what is not covered by any policy of insurance is just as important as what is covered. Typical exclusions under a PTL policy would include claims arising out of fraudulent, dishonest or criminal conduct:

Making Sure the Claim Is Paid

When applying for the policy, a prospective insured owes a duty to the insurer of fair presentation of the risk to the insured. Failure to comply with the duty jeopardises the payment of any subsequent claim made under the policy.

This means that the prospective insured must disclose every material circumstance which the insured knows or ought to know to the insurer. Or failing that the prospective insured must give the insurer sufficient information in relation to those material circumstances as would put a prudent insurer on notice that it needs to make further enquiries. If an insured doesn't comply with the duty of fair presentation then full payment of a claim may be jeopardised.

Trustees must, therefore, ensure they make full disclosure of relevant facts and matters to the insurer before entering into the policy. This is particularly important with PTL insurance as claims very often relate to the issues that arose before the policy came into effect and an insurer, when faced with a claim, will look carefully at whether the insured had properly disclosed matters to it before the policy started.

Great care must also be applied to the proper notification of a claim to insurers so that it is notified to the proper person or department of the insurer within any specified time limit (and certainly as quickly as possible), providing all of the information required by the insurer. Failure to comply with the terms of notification could mean that the insurer declines to cover the claim thereby giving rise to a dispute between the insurer and the insured over the extent of coverage. 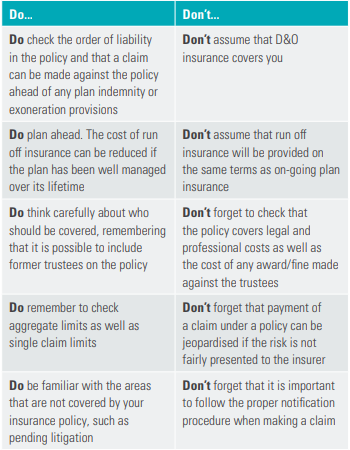