Simulating the deployment of a 4G broadband service: non-technical

The European Patent Office refused to grant a patent on a method of simulating the deployment of a 4G broadband service. Here are the practical takeaways of the decision T 0988/12 (Network deployment simulator / ACCENTURE) of 17.7.2018 of Technical Board of Appeal 3.5.01:

Working out different configurations of a broadband system, and calculating the cost of implementing and operating such a system, is an intellectual activity.

As shown in Figure 1 of the published application, the simulation is based on a number of existing service parameters 104, changeable parameters 102, and constraints 103, and it involves the use of models that define the relationships between the various parameters. There is a “base case model” 110, a “network cost model” 111, and a “bandwidth model” 112. The output of the simulation is one or more candidate solutions 120 for the deployment of the 4G broadband service. 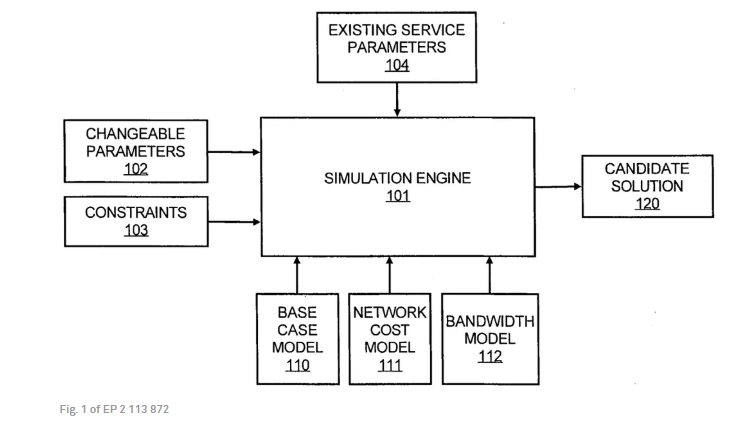 Here is how the invention is defined in claim 1 (main request):

A computer readable storage medium including instructions executed by a computer system (600) to perform a method for simulating and analyzing one or more scenarios for a 4G broadband service to be deployed, by which information is provided over a network, the method comprising:

simulating (504) the deployment of the 4G broadband service, each simulation based on a different set of the received sets of business and technology changeable parameters, the received existing service parameters, a base case model, a network cost model and a bandwidth model,

each of the models storing relationships between the model parameters;

wherein the relationships stored by the models include,

– a relationship between the number of cell sites and the spectrum;

– a relationship between the number of cell sites and the antenna height;

– a relationship between the antenna height and the cell site cost;

– a relationship between the downlink and uplink bandwidth, the backhaul cost and the core the network cost;

– a relationship indicating that the backhaul cost and the core network cost increase as the cell site density increases;

– a relationship between the number of cell sites the cost of maintaining cell sites;

the simulating to determine at least one candidate solution for the deployment of the communications network service,

the simulating includes determining network bandwidth requirements for the deployment of the 4G broadband service based on at least the bandwidth model;

generating (506) an analysis for each candidate solution, the analysis evaluating an impact of the changeable parameters and the existing service parameters on the deployment of the 4G broadband service,

wherein the at least one candidate solution includes business and technology sub-solutions.

Following the established COMVIK approach, the board assessed whether the features of claim 1 that distinguish the invention over the closest prior art make a technical contribution, since only these features can establish an inventive step. The board took the view that claim 1 differs from a commonplace data processing system by the simulation carried out by that system. The question is whether this contribution is a technical one that counts towards inventive step:

A computer simulation is essentially the use of a model running on a computer to assess or predict the functioning of a system. It is difficult to see what technical effect such a process might have. The model is itself an abstract, mathematical concept. The simulation process using the model does not have any technical effect on the simulated system. Indeed, that system might not even exist in physical form. There is unarguably an effect on the computer running the simulation, but not one that goes beyond the normal effects of running software on a computer.

Nevertheless, the board also referred to decision T 1227/05, which is currently under critique in the pending referral G1/19. In that decision, it was held that specific technical applications of computer-implemented simulation methods were themselves to be regarded as modern technical methods:

The Board notes that decision T 1227/05 draws a distinction between an adequately defined technical system and a “metaspecification”, i.e. the description of something abstract, or non-technical, in words that make it seem technical. In the latter case, technicality cannot be derived from the simulated system.

It is helpful to consider what actually was judged to be an adequately defined technical system in T 1227/05. The invention in that case concerned the simulation of a circuit under the influence of 1/f noise. The circuit had input channels, noise input channels, and output channels, and its performance was described by differential equations. The Board considered the circuit to be an adequately defined class of technical items, and the simulation of the circuit to be a functional technical feature.

By contrast, the modelling of an undefined “physical system” in decision T 49/99 was considered to be a metaspecification of something abstract. That case concerned a method for analysing a physical system and providing an information model reflecting the essential properties of the physical system in terms of a hierarchy of abstract objects implemented using relational database technology. That type of information modelling was considered to be an intellectual activity that had all the traits typical of non-technical branches of knowledge.

In the present case, the board took the position that claim 1 does not define the simulated system in a way that clearly establishes it as technical, for the following reasons:

Claim 1 refers to a number of parameters that describe the broadband service. Some of them, for example “network” and “bandwidth”, may seem technical. However, as established in T 1227/05, the mere use of technical terms is not enough to adequately define a technical system. That is what is meant by metaspecification.

The appellant had argued that in order to determine the cost, the technical configuration of the broadband system had to first be determined, and this was a technical step. The board did not agree:

The Board does not see that those configurations are adequately defined in the claim. In any case, working out different configurations of a broadband system, and calculating the cost of implementing and operating such a system, is an intellectual activity more like the information modelling in T 49/99 than the circuit simulation in T 1227/05.

For these reasons, the board concluded that the simulation in claim 1 is not technical and does not contribute to inventive step. The implementation of the simulation on the commonplace data processing system would have been obvious to the skilled person using routine methods. Consequently, the subject-matter of claim 1 of the main request was found not involve an inventive step.