Once more unto the breach: ASIC finalises its guidance for the new breach reporting regime

ASIC has now published its updated and final guidance on the new breach reporting regime for AFS and credit licensees that will apply from 1 October 2021.[1] This article highlights:

A summary of the breach reporting regime

ASIC regards the breach reporting regime as one of the most important ways in which it obtains information on compliance and misconduct issues within licensees that enables it to decide which matters to prioritise for regulatory and enforcement action.

ASIC has long been frustrated by what it regards as inadequate and delayed breach reporting by licensees and the deficiencies in the current regime that prevent it from being enforced effectively.

The new breach reporting regime expands the scope of the existing regime under s912D of the Corporations Act 2001 (Cth), by requiring a wider set of actual or potential breaches to be reported to ASIC in a more detailed, prescribed form and for this to take place within 30 days. Non-compliance is a strict liability criminal offence and a civil penalty provision.

The various stages of the new breach reporting process and the decision-making steps involved in assessing what constitutes a ‘reportable situation’ are shown in the following flowchart and decision tree. 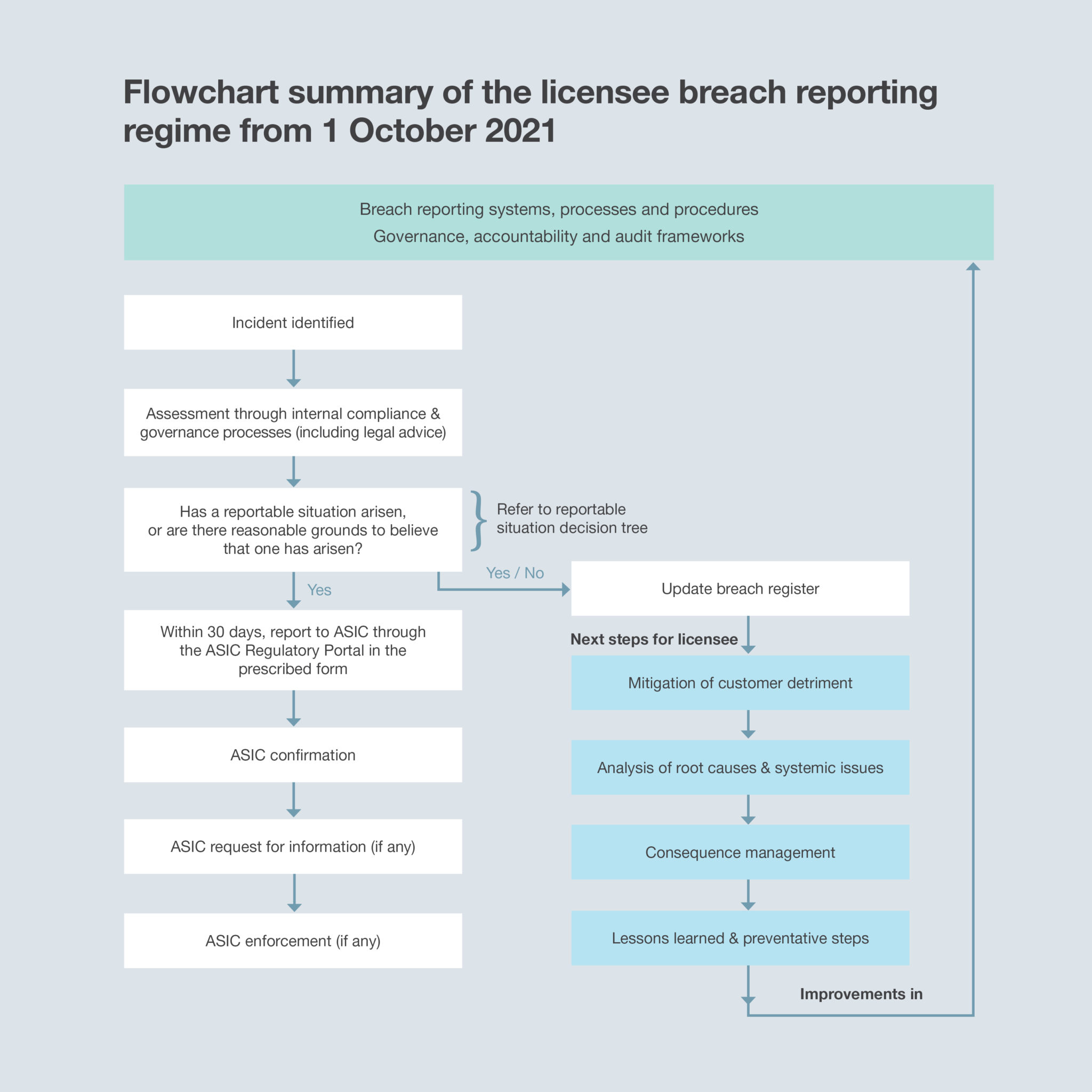 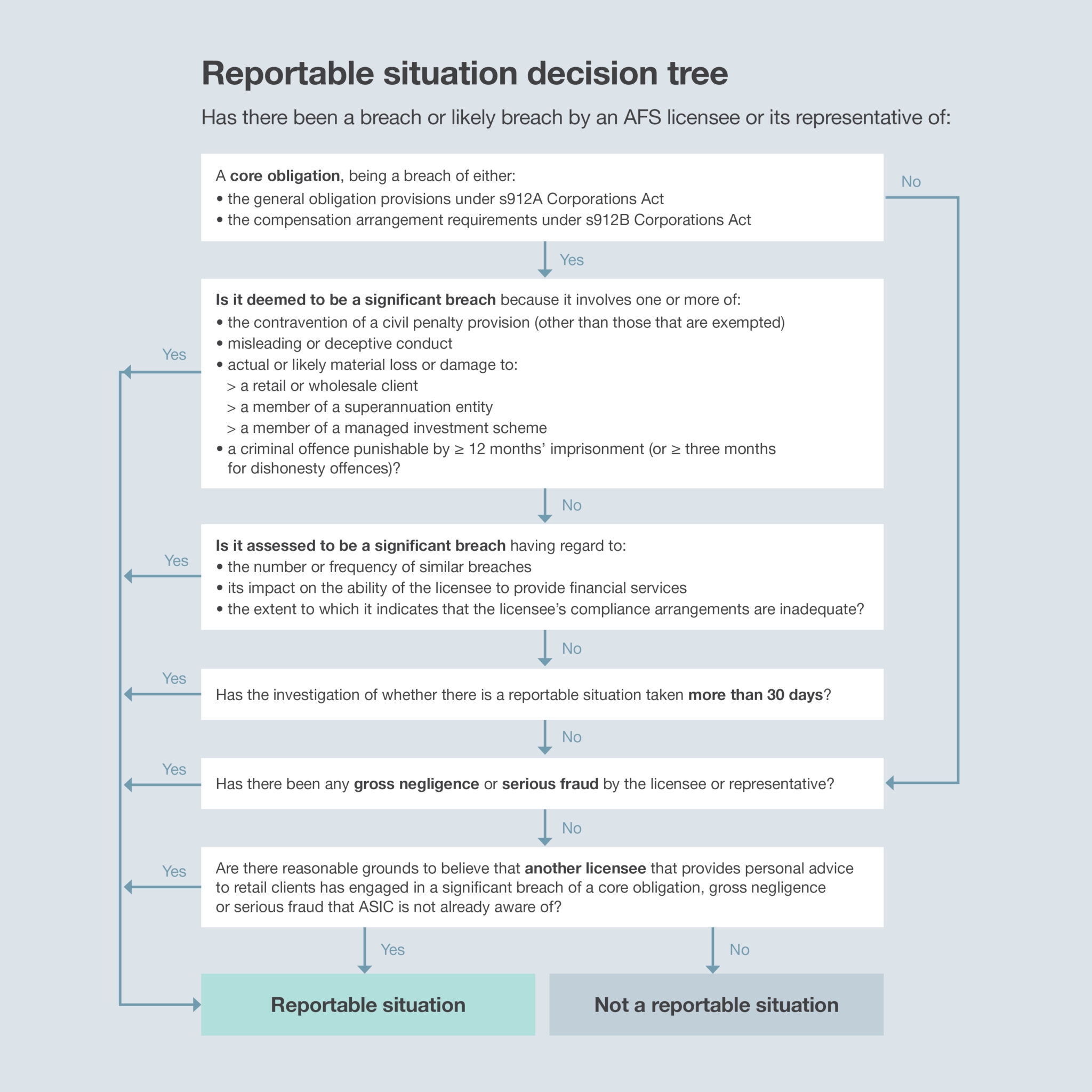 The key updates to ASIC’s guidance

ASIC’s updated guidance follows its consultation on a draft RG 78 that was released in April 2021, and it provides more clarity around the crux of the new regime that a 30-day reporting period commences from the date that a licensee first knows, or is reckless as to whether, there are reasonable grounds to believe that a reportable situation has arisen.

Timing and knowledge – whose knowledge, when?

The regime uses existing law which provides that the knowledge of a licensee can be established by showing that a director, employee or agent of the licensee had the requisite knowledge if this was acquired within the scope of that person’s actual or apparent authority. This means that an employee may acquire knowledge for the purpose of starting the 30-day reporting timeframe even if that person does not have formal authority to make a decision whether to lodge a breach report.

Existing reporting processes will be impacted by this front-ending of the trigger for the start of the reporting deadline. For example, it is commonplace for licensees to delegate their decision-making process to a specially constituted breach committee which receives a report from the compliance team (often with the benefit of legal advice) before voting on a resolution whether to lodge a breach report. This decision may then be escalated to a senior executive for confirmation.

The effect of the new regime will be that this process can still be used, but that in this example time will now begin to run from when the compliance team first knows there are reasonable grounds to believe a reportable situation has arisen – not from when the breach committee or a senior executive has reached or ratified a decision. It also means that a licensee cannot delay lodging a report while it establishes certainty around the reportable situation breach – such as determining actual proof of a breach, confirming the number of affected customers or establishing the amount of loss suffered.

In assessing issues of knowledge, the updated guidance states that ‘what is critical is the nature of the activities being conducted, not which team is conducting them.’ This will always be a matter of fact to determine in each case. For example, the mere identification of an issue within a licensee’s business (such as by its line 1 function) which is logged as an incident and escalated for review to a line 2 compliance team will not fix the line 1 function with knowledge if it has not assessed whether the incident could result in a reportable breach.

ASIC has stated that it will not generally consider the following scenarios to constitute an ‘investigation’ because they are not specifically directed towards establishing the facts of a reportable situation:

The updated guidance confirms that a single breach report may deal with multiple reportable situations that are identical or similar or related to each other where there is a single, specific root cause. An example of a single root cause is given as an individual system error or process deficiency.

Licensees are expected to exercise their judgement in determining the appropriateness of any batch reporting of breaches while being careful to meet the 30-day reporting requirement for each reportable situation.

For the first time, a licensee will have an obligation to report to ASIC if it becomes aware that a reportable situation has arisen in relation to another licensee that provides personal advice to retail clients.

ASIC has clarified that it does not expect licensees to take proactive steps to investigate potential reportable situations involving other licensees that it deals with in the course of its business. Rather, they are now to be obliged not to turn a blind eye to any facts that come before them through their usual practices or processes that would give them reasonable grounds to conclude that a reportable situation has arisen for another licensee.

ASIC considers that the high-level expectations it set out in its 2018 report into breach reporting remain relevant and should be considered by all licensees in adapting to the new regime.[2] This includes there being clear end-to-end senior accountability of breach reporting processes and procedures, and creating an environment that supports the raising of concerns about risks, prioritises investigations and remediation, and communicates transparently about incidents and breaches.