The importance of whistleblowers and the vital role they play in exposing misconduct and wrongdoing in organisations and our society cannot be emphasised enough. Many cases of corruption, fraud and malpractice would never have been exposed if it were not for the courage of whistleblowers. Retaliation is a very real threat, and whistleblowers that make disclosures can be vulnerable and may risk their job, reputation or even, in extreme cases, life for uncovering wrongdoing.

Legislations in a number of the Member States of the Europe Union (EU) and Australia that sought to protect whistleblowers, were historically fragmented and disharmonious. However, both the EU and Australia have recently increased protection for whistleblowers by introducing comprehensive protection regimes.

EU Directive on the protection of whistleblowers

On 16 April 2019, the European Parliament adopted a “Directive on the protection of persons reporting on breaches of Union law” (Directive). It is an EU-wide uniform common minimum standard giving a wide range of protections to whistleblowers reporting on breaches of EU law in a work-related context. The EU Member States are required to comply with the Directive no later than April 2021.

What disclosures will be protected?

The Directive introduced a three-tier system for reporting irregularities. Whistleblowers are allowed to report either internally within their organisations or externally to competent authorities. However, they are encouraged to use internal reporting channels first. If, after reporting internally or externally, no appropriate action was taken within the prescribed timeframe, or he/she has reasonable grounds to believe that there is an imminent danger to the public interest or a risk of retaliation, the whistleblower may report publicly (e.g. to the media) and will still be qualified to receive protection.

Who is required to set up reporting channels?

Who will be protected, and what type of protection?

The Directive introduced safeguards to prevent whistleblowers from retaliation. 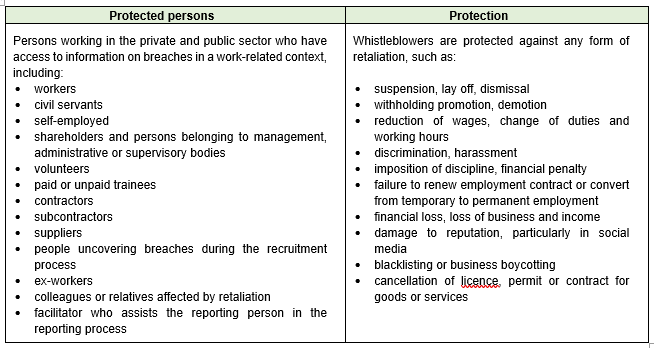 Under the Directive, whistleblowers will not incur any liability in respect of the acquisition of, or access to, the relevant information. Also, they will not be considered to have breached any duty of confidentiality in making a report or public disclosure.

The Directive requires the Member States to impose effective sanctions under applicable national law on persons or entities that hinder reporting, retaliate, bring proceedings against whistleblowers, or disclose the identity of the whistleblower.

Companies have a 6-month transitional period to put in place a whistleblowing policy by 1 January 2020.

Who is eligible to make a protected disclosure?

The definition of an eligible whistleblower includes current and former:

To make a protected disclosure, whistleblowers must have reasonable grounds to suspect that the information concerns misconduct or an improper state of affairs concerning an entity.

To whom can an eligible whistleblower make the disclosures?

A whistleblower who has reasonable grounds to believe that the disclosure would be in the public interest, or concerns a substantial and imminent danger to the health or safety of persons or the natural environment, can make protected disclosures to a journalist or a member of Parliament of the Commonwealth.

A range of remedies are available to whistleblowers who suffer detriment.

The TLAA also allows whistleblowers to make anonymous disclosures and have their identities protected.

Under the TLAA, significant penalties will be imposed on companies and individuals who fail to comply with the new law. Failure to have a compliant whistleblower policy in place, breach of confidentiality of the identity of a whistleblower or victimization of whistleblower can result in civil penalties and/or criminal offences.

Acknowledging this as a pressing issue, the financial services sector took steps to recommend a whistleblower protection mechanism for the industry. In the Securities and Futures Commission’s (SFC) May 2017 newsletter “Enforcement Reporter”, the SFC identified corporate fraud and misfeasance as the highest risk to Hong Kong’s markets and investors, and recommended directors and senior management of listed companies establish effective whistleblowing policies to safeguard against corporate misconduct. Further to its recommendation, the SFC announced on 18 October 2018 that an online reporting system had been established for the public to report suspected corporate fraud and market misconduct. Such reports can also be made anonymously by whistleblowers to better protect their identities.

On 21 December 2018, the Hong Kong Monetary Authority (HKMA) issued a circular drawing the attention of Registered Institutions (RIs) to misconduct risks in the financial industry and recommending to them the expected standards for the prevention and management of misconduct risks. Among these, the HKMA expects RIs to provide:

It remains to be seen whether or not the Hong Kong government would introduce a more comprehensive legislation for the protection of whistleblowers in the future. Nevertheless, employers should expect the unexpected and get ready now for change by: