On March 4, 2020, the Department of the Treasury issued a proposed rule to establish filing fees for voluntary notices submitted to the Committee on Foreign Investment in the United States (“CFIUS”) for review. As described in our prior alerts — Treasury Finalizes New CFIUS Regulations and Treasury Issues Long-Awaited Proposed CFIUS Regulations — the Foreign Investment Risk Review Modernization Act of 2018 (“FIRRMA”) authorized CFIUS to charge filing fees up to the lesser of 1% of the value of the transaction or $300,000, adjusted annually for inflation, but CFIUS did not include fees in the primary sets of FIRRMA implementing regulations that became effective February 13, 2020. The proposed rule is scheduled to be published in the Federal Register on March 9, 2020 and will allow 30 days for public comments.

The proposed rule would establish a filing fee for voluntary notices of “covered transactions” under 31 C.F.R. Part 800 and “covered real estate transactions” under 31 C.F.R. Part 802 submitted to CFIUS for review. The proposed fee structure and amounts are the same for Parts 800 and 802, and the fee would be due when a formal notice is filed. Importantly, the proposed rule treats notices differently than declarations and unilateral reviews. CFIUS would not charge a fee for any declaration submitted to CFIUS (whether mandatory or voluntary), or for any unilateral review of a transaction initiated by CFIUS. CFIUS also would not assess an additional fee for notices that parties withdraw and refile, unless the Staff Chairperson determines there was a material change to the transaction or material inaccuracy or omission in the original notice. However, fees would be charged for notices filed following CFIUS review of a declaration where CFIUS requests the parties file or informs the parties that it is not able to conclude action on the basis of the declaration.

The proposed rule would establish six tiers for assessing filing fees based on the value of the transaction that is the subject of the voluntary notice: 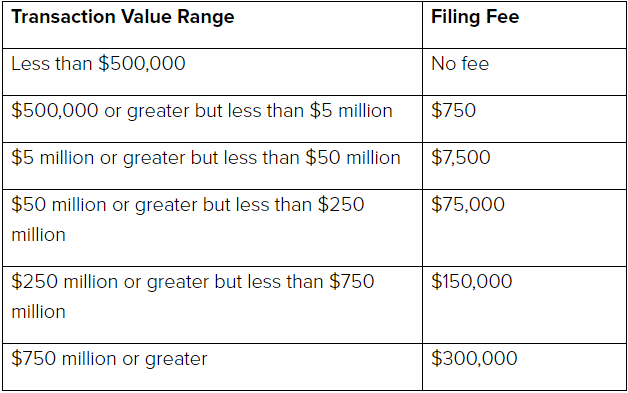 By comparison, the current fees charged for premerger notification filings under the Hart-Scott-Rodino Antitrust Improvements Act are: