Heinz’s kids food packaging torn to Shredz by the ACCC

The Federal Court of Australia, in ACCC v HJ Heinz Co Australia Ltd [2018] FCA 360, has found that Heinz engaged in misleading and deceptive conduct in relation to the packaging for its "Shredz" snack for toddlers. Justice White found that the packaging, shown below, conveyed the representation that Shredz were beneficial to the health of children when they in fact were not, due to their high sugar content and sticky texture. Two other misrepresentations alleged by the ACCC were dismissed.

The ACCC's case against Heinz

The troublesome products were Heinz's Shredz, a "tasty treat" for children aged 1-3 years consisting mostly of concentrated fruit and vegetable puree (the Product). The case concerned three flavours of the Product sold at various times between July 2013 and May 2016. The packaging of all the Products was similar to that of the "berries apple & veg" flavour: 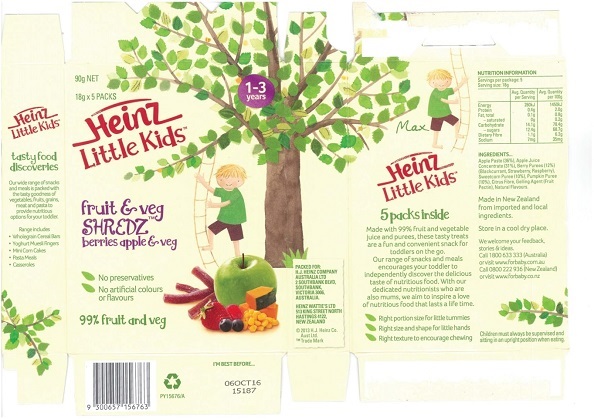 The ACCC alleged that this packaging conveyed representations that the Product:

The ACCC alleged that each of these representations was false and that Heinz had therefore breached the Australian Consumer Law (ACL). Justice White considered the relevant class of purchasers of the Product to be the parents or carers of toddlers who are shopping in a supermarket as a part of their periodic food shopping. The question was therefore whether a significant number of these persons may have been misled or deceived by Heinz's packaging.

Was the Nutritional Value Representation conveyed by the packaging?

The ACCC claimed that the packaging conveyed this representation by implication, relying on the prominent photo of fruit and vegetables, the location of this photo next to a picture of the Product, and the words "99% fruit and veg", which the ACCC alleged represented that the Product was "as good as" fruit and veg.

Was the Healthy Food Representation conveyed by the packaging?

This representation contained two limbs, the first being that the Product was "nutritious", and the second that it was "beneficial to the health of children". The ACCC needed to show that both limbs were conveyed by the packaging.

The conclusion that a particular representation was conveyed is more readily reached where it was intended to be conveyed by the representor. Relying upon internal Heinz documents and the packaging itself, his Honour accepted that Heinz had intended to represent that its Little Kids products were nutritious and healthy.

His Honour found that Heinz had been successful in conveying this representation through its packaging, based on the use of:

Heinz claimed that this would be contextualised by the (accurate) Nutrients and Ingredients Panel, however his Honour found that the ordinary consumer would not look at the panel, particularly given its smaller print. The packaging therefore conveyed to ordinary consumers both limbs of the Healthy Food Representation.

Was the Healthy Food Representation misleading?

The ACCC only needed to show that one limb of the representation was false or misleading. To this end, it relied on evidence that the Product is high in sugar, has a low moisture content, has a low satiety value, is high in kilojoules, and has a sticky texture.

Both parties led extensive evidence from multiple nutritionists and experts. Justice White generally preferred the evidence of the ACCC's experts, given that one of Heinz's experts had selectively quoted from an academic article which, when read in its entirety, actually undermined his opinion, and another had an undisclosed continuing association with the Australian sugar industry.

In terms of the first limb, the Product was in fact nutritious, as this was interpreted to mean merely that the product contained some of the nutrients necessary to sustain human life. Therefore the ACCC failed to establish that this limb was false. However Justice White found that the second limb of the representation was false and misleading, due to the high sugar content of the Product and its sticky texture, which meant that it would be detrimental to dental health.

Approximately two-thirds of the Product was sugar, and of a large amount of this was "free sugars", meaning artificially added sugars. Under World Health Organisation guidelines, a single serve of the Product contained more than half of the recommended daily intake of energy from free sugars for 1-2 year olds, and over 35% for three year olds. This meant that Product was not in fact beneficial to the health of children, particularly given the probability of children consuming free sugars in the rest of their diet.

In terms of dental health, the Court accepted the link between foods with high sugar content, especially those which are "sticky", with dental caries (tooth decay or cavities), as this texture meant that the chewed product adheres readily to the teeth. Therefore the Product was found to be harmful for dental health.

While Justice White found that there was insufficient evidence relating to the other allegations of the ACCC, the high sugar content and the detrimental effect on dental health of the Product was sufficient to demonstrate that the Product was not beneficial to the health of children, meaning that the second limb of the Healthy Food Representation was misleading.

Was the Healthy Habits Representation conveyed by the packaging?

The ACC claimed that this representation was conveyed by the "totality" of the packaging and in particular the statement on the back of the box that "we aim to inspire a love of nutritious food that lasts a life time". The ACCC also relied upon a Heinz document which affirmed the company's "commitment to kick start a toddler's journey of healthy eating".

Had Heinz contravened other sections of the ACL?

Justice White therefore found that Heinz had contravened section 18 of the ACL by engaging in misleading and deceptive conduct. The ACCC also alleged infringement of other sections of the ACL, which were resolved by Justice White as follows:

Did Heinz know about the misrepresentations?

Justice White therefore upheld the ACCC's claim with respect to the second limb of the Healthy Food Representation and found that Heinz ought to have known about the misrepresentation. His Honour made declarations to this effect on 10 April 2018. The appropriate penalties will be determined at a hearing on 1 August 2018, and it is likely that the finding concerning Heinz's constructive knowledge will play a significant role here.

This case is another example of how careful companies must be in designing the packaging for their goods and marketing their products. Even if the packaging does not represent something explicitly, the courts are very clearly prepared to find that it conveys a representation by implication, based on factors such as imagery, written statements, and even the choice of colours.

More specifically, in terms of food products, companies should ensure that any product marketed or represented as healthy is in fact healthy, and is not overly high in sugar content (when compared to widely accepted nutritional guidelines such as those of the World Health Organisation) or harmful for dental health. This is particularly relevant where the products are marketed for consumption by children.

Including an accurate Nutrients Table on packaging is not sufficient to displace any representation made by other elements of the packaging or advertising as to the health benefits of the product. Such tables are treated by the courts as similar in effect to "fine print".

And finally, where leading evidence from a nutritionist on the health effects of sugar, make sure they don't have an undisclosed association with the Australian sugar industry.

Five things that happened while all eyes were on COVID-19.
In our latest blog we highlight five non-virus-related developments that our editorial team reported on while COVID-19 turned the world upside down.
Read more here