The U.K. government is proposing to reintroduce preferential status to certain taxes in U.K. insolvencies beginning 6 April 2020. If enacted:

In the U.K.’s Autumn Budget of 2018, the chancellor announced a proposal (the Proposal) to grant preferential status to certain taxes in U.K. insolvencies (commonly known as “Crown Preference”). This has provoked outcry from finance and insolvency professionals alike, with R3, the trade association for the U.K.’s insolvency and restructuring professionals, openly criticising the Proposal.

This briefing note provides an overview of what the Proposal entails and, in particular, the potential impact that it may have on ABLs.

What Is Crown Preference?

The Proposal, which, if followed through, will be introduced in the Finance Bill 2020, seeks to promote certain HMRC taxes to the rank of “secondary preferential creditor” in the U.K. insolvency waterfall, for insolvencies beginning on or after 6 April 2020 (the Effective Date). Specifically, this would mean that VAT, PAYE (“pay as you earn” income tax paid by employees, including student loan repayments, which are deducted at source by employers), employee National Insurance Contributions (NICs) and Construction Industry Scheme Deductions (CISDs) (collectively, the Relevant Taxes) would rank ahead of creditors with floating charge security and unsecured creditors. The status of income tax, capital gains tax, corporation tax and employer NICs would remain unchanged.

In some ways, this reverses the abolition of Crown Preference that was effected by the Enterprise Act 2002, which constituted a major overhaul of the English insolvency framework at that time. However, there are a number of ways in which there introduction of the Crown Preference regime would be different. First, Crown Preference only applied to taxes that had been incurred in the 12 months (six months for VAT) before the onset of insolvency. Notably, the Proposal does not include any time limit, meaning that although Crown Preference is only intended to apply to insolvencies that begin on or after 6 April 2020, tax liabilities that were incurred at any time before that date will be captured. Secondly, before 2002, all forms of tax, not just the Relevant Taxes, benefitted from Crown Preference. Thirdly, the “prescribed part” did not feature in the insolvency waterfall before the Enterprise Act 2002 came into effect, meaning that floating charge holders ranked just behind preferential creditors.

Figure 1 provides a graphic summary of the effect of Crown Preference on the position of tax liabilities in the distribution waterfall in a typical liquidation carried out under English law. The courts of England have a broad jurisdiction to order the winding up of companies registered in England and Wales, as well as overseas companies, pursuant to Parts IV and V of the Insolvency Act 1986. 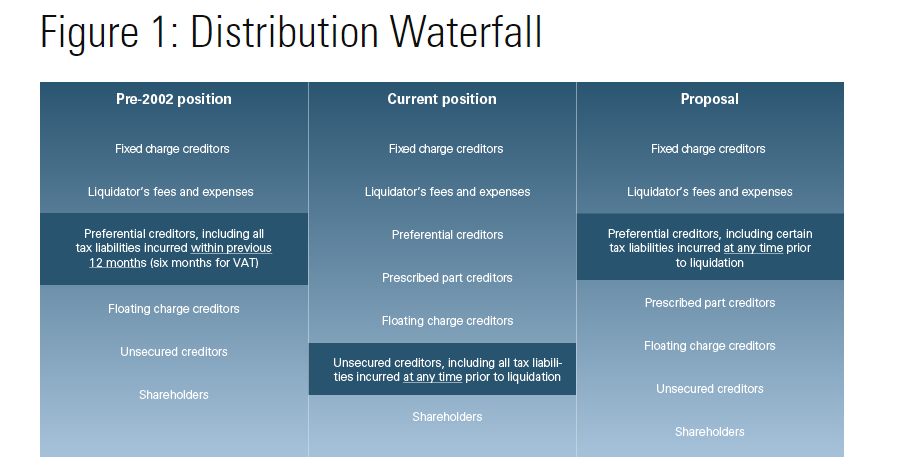 Impact of the Proposal on ABL Financings

It is important to emphasise that the Proposal, if enacted, will be retroactive in its effect. Although the Proposal will apply only to insolvencies occurring after the Effective Date, Crown Preference would apply to Relevant Taxes incurred at any time in the obligor's tax history.

Certain types of assets, such as plant and machinery and real estate, are typically secured by way of a fixed charge. Some lenders also require a fixed charge over trade receivables, often requiring the obligor to ensure customer invoices are paid into blocked accounts (so as to exercise sufficient control such that the charge is a fixed, and not a floating, charge). On the other hand, an obligor's inventory, which can include both raw materials and finished goods, is typically only subject to a floating charge. This is because it is impractical for an obligor to seek consent every time it wishes to sell inventory, as would typically be required if the inventory was subject to a fixed charge. For similar reasons some lenders only seek a floating charge over trade receivables.

Possible Impacts of the Proposal on the ABL Market

Lenders’ tax due diligence, including during periodic field examinations and appraisals, may become more onerous and expensive. Lenders may also want to ensure that the obligors are complying with their tax obligations on an ongoing basis (so as to limit the amount that HMRC may be entitled to in an insolvency scenario). This may be reflected in more restrictive covenants, undertakings, and representations and warranties in ABL credit agreements.

As discussed above, fixed charges will be unaffected by the Proposal, providing lenders with security that would rank above HMRC in the insolvency waterfall. Lenders may therefore insist on fixed charges over a greater number of assets.

Whilst the status and impact of the Proposal remain uncertain, lenders may wish to mitigate the higher level of risk associated with Crown Preference ranking senior in priority to floating charges and unsecured creditors by expressly including an additional reserve category or expanding priority payables or other categories of reserves to address Crown Preference, and by including provisions that would allow such reserves to go into effect on the Effective Date and to cover all such tax liabilities incurred prior to, on or after such date. In addition, ABL lenders also may address such risk by increasing the price of borrowings against assets of U.K. companies, restricting access to obligors with favourable assets and credit history, or by purchasing insurance to cover their additional exposure. Associated costs would likely be passed on to borrowers.

ABL agents and lenders also should consider whether existing ABL credit agreements include sufficient flexibility to impose additional reserves, whether priority payable reserves or otherwise, or adjustments to net orderly liquidation value (NOLV) calculations in the inventory appraisals, in order to address the impact of the Proposal, without amending existing ABL credit agreements.

Finally, lenders who are concerned that an existing obligor is in financial difficulties may be more inclined to enforce in advance of the Effective Date. HMRC will continue to rank behind floating charge creditors in any insolvency commenced prior to the Effective Date.

Despite the concerns raised in this note regarding the impact that may be felt by ABL providers as a result of the imposition of Crown Preference, it is important to note that the Proposal is not yet law and may never become law. Following the closing date for comments (which occurred on 27 May 2019), the government’s consultation document indicates that it will publish a summary of the responses along with draft legislation in the summer of 2019.