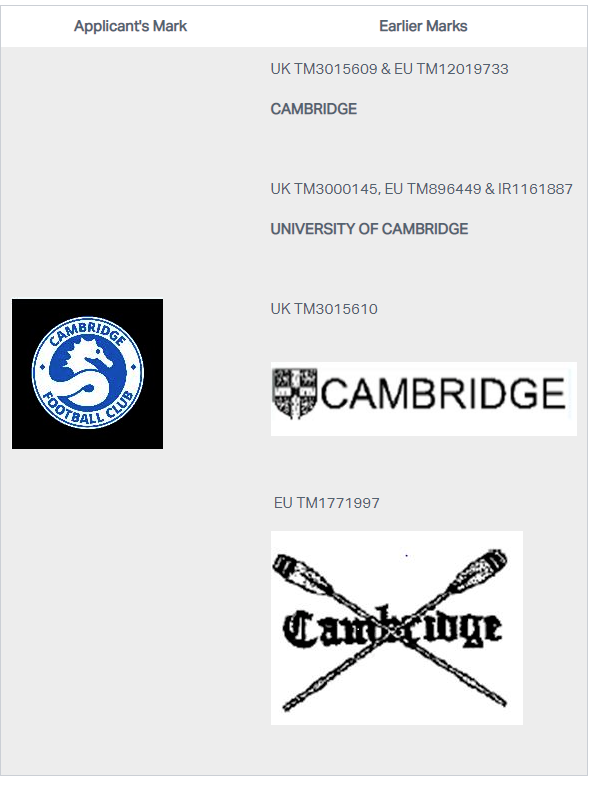 The Chancellor, Masters and Scholars of the University of Cambridge opposed the application on the ground of section 5(2)(b) of the Trade Marks Act 1994 on the basis of their earlier trade marks (above right).Cambridge Football Club applied to register the mark (above left) in June 2017 for the following goods and services: Class 25: Clothing; Footwear and Class 41: Sporting education services.

Comparison of the goods/services

Regarding class 25, the examiner found that the opponents' goods "clothing; footwear" was identical to "clothing; footwear" in the applicant's specification. For class 41, the examiner found that "education and educational services" in the opponents' specification of services was broad enough to encompass all educational services including "sporting education" in the applicant's specification. The examiner therefore considered them to be identical on the Meric principle (see case T-133/05).

The examiner noted that the UK mark for 'Cambridge' was accepted for publication on the basis of having acquired distinctiveness through use. However, no claim was made for enhanced distinctive character, nor was any evidence filed in these proceedings, so the examiner only had the inherent distinctiveness of the earlier 'Cambridge' marks to consider. These marks consisted solely of a geographical location, Cambridge.

Whilst geographical names can be registered as trade marks, these will not generally be considered as having the highest degree of distinctiveness. Therefore, the examiner found that the two 'Cambridge' marks and "University of Cambridge" marks were weakly distinctive and averagely distinctive (respectively) for their class 41 services.

Comparison of the marks

In a visual comparison, the point of similarity shared by all marks is the word element CAMBRIDGE. The opponents' marks ending '609 and '733 consist only of the word CAMBRIDGE and have no other aspect to them, the marks ending '449, '145 and '887 have the additional words UNIVERSITY OF and the remainder all have additional devices. In terms of differences the application has the additional words FOOTBALL CLUB (although the Examiner found that these words lack distinctiveness) and it has a prominent seahorse device.

As regards the aural comparison of the marks, the common element is again the word CAMBRIDGE. The device elements of any of the marks will not be spoken. The aural differences between the applicant's mark and the opponent's marks ending '449, '145 and '887 are the additional words FOOTBALL CLUB and UNIVERSITY OF, both of which will be spoken. Taking these factors into account the examiner found that there is a medium degree of aural similarity for those earlier marks which just contain the 'Cambridge' word element and a lower degree of aural similarity for the two earlier 'University of Cambridge' marks.

If there is any conceptual similarity between the marks, the examiner reasoned that this will be focused on the geographical location of Cambridge. The device elements do not share a concept and a football club and a university are dissimilar notions. Therefore the examiner found that the applicant's mark has a distinctly different conceptual hook to any of the opponents' marks, and so there is only a low degree of conceptual similarity based on the shared idea of Cambridge as a geographical location.

As regards indirect confusion, the examiner considered the distinctive strength of the shared word element, Cambridge, which is weakly distinctive. The device elements, ie the heraldic shields and crossed oars, which give three of the opponent's earlier marks a greater distinctiveness have no similarity to the applicant's mark.

Therefore indirect confusion was also not found and so the opposition failed.