The energy sector had a stagnant year for mergers & acquisitions, with energy activity dropping slightly from a peak in 2017 of USD 306 billion to USD 255 billion in 2018. Rebounding oil prices, sanctions and regulatory pressures are impacting transactions across the energy industries of oil and gas and renewables.

The Firm’s Global Transactions Forecast, in association with Oxford Economics, predicts a decrease in energy M&A through the next two years with USD 171 billion expected in 2019. Globally, the world economy is cooling as well, however, the report predicts overall M&A values to creep back up in 2020 with stabilization in 2021. 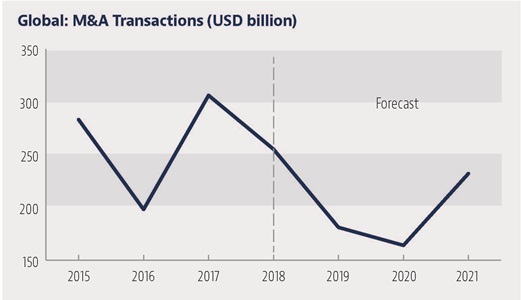 “Global demand for energy and its impact on commodities prices, combined with government policies and intervention, will likely drive M&A and IPO activity in the coming year. Even with a decrease of investor interest in IPOs, the O&G sector will still likely draw money from private equity firms, infrastructure funds and hedge funds.” 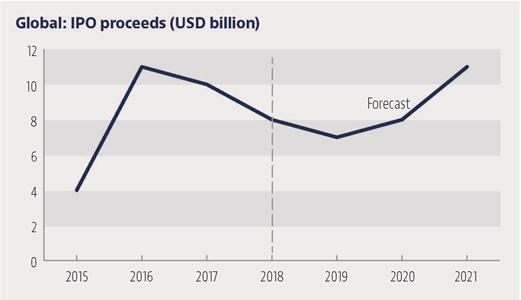 “Globally, we are expecting to see only a slight drop in Energy-related IPOs in 2019, before increasing again in 2020 – but this remains counter to the overall strong sentiment for IPOs expected this year.”

The renewables sub sector will likely experience increases in M&A and IPO activity as the energy industry rebalances investments favour of renewables. Driving transactions will be the market’s response to the disruption being caused by technology advances in electric vehicles, batteries, digitalization, renewables and policy changes around sustainability, climate change and disclosure, sustainable lending, subsidy-free renewables.

Jose added, “As the world’s energy mix transitions to electricity, electric vehicles and batteries proliferate, and sustainability becomes a more critical focus, we expect to see more energy companies investing in the renewable space to generate new lines of business or to build organic growth in renewables.”

In fact, a majority of the Fortune 100 companies have set renewable energy targets and many have joined the RE100, a group of 140 committed to sourcing 100 percent of their electricity from renewables.

“The role of the corporate is key. Expect to see corporates, especially, large multi-nationals that have these global targets be drivers for new investments in renewables as they look to meet those targets and structure corporate power purchase agreements in a range of countries.”

Adam explains, “Oil & Gas independents are expected to continue to fail to feature in the IPO market. However, based on our own research, discussions with market participants and our own pipeline globally, we expect a strong IPO market for renewables, particularly in EMEA. Capital is expected to continue to flow into the renewables sector, not only from incumbent operators, but also in the IPO market, given the continuing demand for renewable energy by customers, growing political pressure, and improving technology. But even outside the pure-play renewable energy space, we expect a number of private operators to come to market to fund their growth, particularly into new geographic markets.”

In Latin America, investors are seeking long-term opportunities. With new governments taking office in Brazil and Mexico, and the NAFTA resolution uncertain, we expect stronger dealmaking activity in the next couple of years, with M&A in the region rising to USD 94 billion in 2019 and USD 98 billion in 2020.

“Latin America’s two major IPO markets – Mexico and Brazil – fared reasonably well in 2018, especially considering the wider malaise in both economies. Given the expected improvement in economic and financial conditions in 2019, underlying prospects for IPO should improve.”

Total domestic IPO activity is forecast to rise from USD 5.3 billion in 2018, to USD 6.5 billion in 2019, before cooling the following year.

High levels of activity in energy are expected in the years ahead in developing economies, especially those in Asia, due to the increasing energy demand of their populations. China, for instanced, is predicted to led the market in renewables growth with the country expect to add nearly 590GW of renewables capacity by 2028.

Paul explains, “If you look at the global figures, Asia Pacific always leads the charge in terms of new installed megawatts of renewables and investment. Both China and India have opened up the energy markets through reforms that should allow more opportunities for foreign investors, particularly, out of Europe.”

Sanctions on Iran and Venezuela will likely negatively impact O&G supply and deal activity in the year ahead. Other regulatory pressures could stem from BEPS’ tax impacts; antitrust and employment concerns stemming from the investigation of no-poach agreements by the US and a number of other countries in Europe and Asia Pacific; and an increasing number of rules requiring companies to disclose the nature of their exposure to climate change.

The United States will also likely have a significant amount of energy activity due to its increasing production of crude oil and LNG export capacity, which some predict will double by the end of 2019.