As part of its Integrated Resource Plan and Long-Term Procurement Plan proceeding (IRP-LTPP R.16-02-007, or IRP Proceeding), the California Public Utilities Commission (CPUC) voted unanimously on November 7 to issue a decision, D. 19-11-016, (the Decision) to address anticipated electricity shortages and reliability challenges in California. The CPUC voted to authorize the procurement of 3,300 MW of energy by 2023, while seeking extensions for almost 4,800 MW of gas generation units due to retire by December 31, 2020. The CPUC’s action will result in near-term opportunities for clean energy resources to secure contracts with California load-serving entities (LSEs), including investor-owned utilities (IOUs), community choice aggregators (CCAs), and electric service providers (ESPs).

This Decision substantially adopts the original proposed decision in this proceeding issued on September 12, 2019, and the revised proposed decision issued on October 21, 2019. Notably, however, the procurement and extension amounts set forth in this Decision are higher than what was included in the initial September decision. The Decision was formally issued on November 13, 2019 and is subject to rehearing for a period of 30 days thereafter, after which it will become final and non-appealable.

Under California law, the CPUC develops an Integrated Resource Plan (IRP) for the utilities subject to its jurisdiction, which it develops in its IRP Proceeding. The Decision is based on an analysis of system needs and party comments presented in the IRP Proceeding. An analysis by the CPUC staff and the California Independent System Operator (CAISO) shows that current electricity supplies are tight and that in the near future reliance on imports will be increased beyond historical levels, creating uncertainty in electricity supply until more in-state generation is built. The tight supply is driven by several market trends in the electric sector, including the growing penetration levels of wind and solar resources that require integration into the grid, time of day and time of year shifts of system peak loads, a decline in reliable imported electricity to meet peak demand as other states increase their renewable generation, and the retirement of aging natural gas plants. The situation is particularly acute for Southern California since several natural-gas-fired power plants along the coast are scheduled to retire soon because they use ocean water for so-called “once-through cooling” (OTC), which can have a detrimental impact on marine life.

Amount and Timing of Procurement Authorized

To avoid possible electric system reliability problems, the Decision orders LSEs to procure an incremental 3,300 MW of new electricity resources. At least 50% of the new resources must be online by August 1, 2021, with 75% by August 1, 2022, and the full amount on August 1, 2023. The Decision notes, however, that LSEs are encouraged to exceed these minimum requirements to help minimize or eliminate the need for OTC compliance extensions.

The Decision provides guidance concerning the baseline to be used to determine whether procurement of a new electricity resource will be considered “incremental.” As a general matter, the baseline will include the resources assumed for the year 2022 in the CPUC’s Preferred System Plan adopted by the CPUC in its IRP Proceeding. 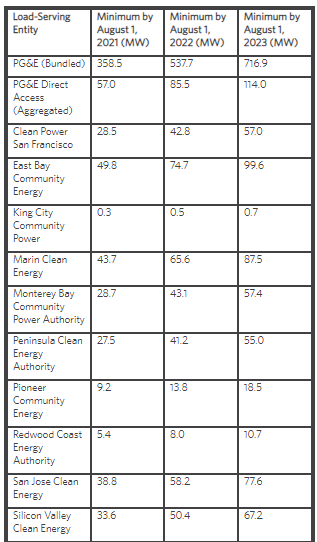 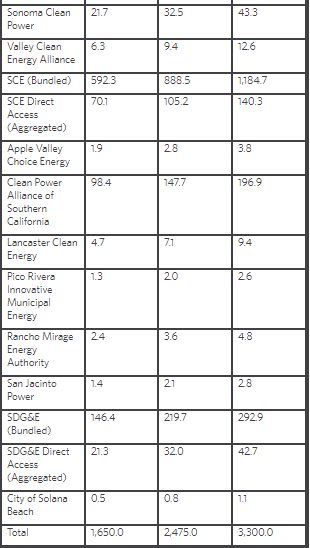 The CPUC expects the LSEs to add incremental clean energy resources, which can help meet the system peak capacity needs. The Decision observes that as system peak capacity has shifted to later in the day, the contribution of solar resources without storage becomes less valuable and the need for other renewable integration resources is more acute. The types of clean energy resources that can address these needs include hybrid solar and storage, standalone storage systems, energy efficiency, and demand response.

The Decision finds that there may be some situations in which procurement contracts with natural-gas-fired generators may be necessary and can be counted toward the procurement target:

The CPUC's order allows only 20% of the total obligations of each LSE to be imported power.

Finally, the CPUC encourages the LSEs to conduct their procurement with an eye toward grid resiliency, in light of the state’s recent experience with wildfires and power shutoffs.

The Decision specifies that procurement must be conducted on an all-source basis, including both existing and new resources (except new gas-only resources), and may include LSE-owned resources when justified.

On May 4, 2010, the State Water Resources Control Board (Water Board) adopted a policy regulating the use of seawater for cooling purposes at power plants in California. The policy establishes technology-based standards to implement federal Clean Water Act section 316(b) and reduce the harmful effects associated with cooling water intake structures for power generating facilities on marine and estuarine life. The policy applies to 19 existing power plants. Of these, nine have ceased their OTC operations and the remaining 10 are planning to comply by retiring their existing OTC plants’ equipment. In some cases, plants will repower their locations with modern non-water-cooled systems. Most of the coastal power plants that still use OTC and are scheduled to retire or repower are located in Southern California.

In light of the state’s electric reliability challenges, the Decision indicates that it will request that the Water Board make schedule adjustments for certain power plants identified by stakeholders as essential to reliable electricity for California between 2021 and 2023. In particular, the Decision recommends that the Water Board extend the OTC compliance deadlines for the following units currently slated to retire by December 31, 2020, for the time periods specified:

In addition, the Decision indicates that the CPUC intends to request a temporary extension for the Moss Landing power plant, which is in the process of upgrading to comply with OTC requirements. The CPUC intends to recommend that if the upgrades are not certified by the December 31, 2020, compliance deadline, the plant should still be allowed to operate until the upgrades have been certified by the Water Board.

The Decision makes it clear that the CPUC’s recommendation that the compliance deadlines be extended is only a bridge strategy to allow new clean energy capacity to come online and that the CPUC remains committed to compliance with the Water Board’s OTC policy. The CPUC has indicated that the OTC units are not a resource the state can continue to rely on going forward and expects the plants will close after the extension periods.

Additional Near Term Regulatory Actions Needed to Implement the Decision

Some additional regulatory actions will be needed in the near term to implement the Decision:

The Decision is a continued demonstration of the dynamic nature of California’s energy future as the state seeks to implement its environmental protection, renewable energy procurement, and greenhouse gas reduction objectives while ensuring safe and reliable electric service for its residents.