In Another Instagram Embedding Decision, SDNY Finds Use of Image of Cardi B Fair
Blog Incontestable Blog

The Southern District of New York recently issued an opinion in a copyright suit involving a photo of celebrity rapper Cardi B. Photographer Rebecca Walsh sued Townsquare Media, Inc., alleging copyright infringement for Townsquare’s use, without a license, of one of Walsh’s photos of the rapper. But while it was true both that Townsquare used the photo and also that it was unlicensed, the court granted Townsquare’s motion for judgment on the pleadings, ruling that Townsquare’s publication of the photo was “fair use.”

Walsh is a Brooklyn-based professional photographer who licenses her photos for media use. This case stemmed from something that happened in September 2018, when she photographed Cardi B at a Tom Ford fashion show in New York City and licensed the photos through Getty Images. A few days later, Townsquare ran an article online on XXL Mag that included one of Walsh’s copyrighted photos. Walsh’s photo appeared in the article through an “embedded” post from Cardi B’s Instagram—which allowed readers to see the photo by clicking on a link in the article (the photo remained on a third-party website). Walsh, though, alleged in her suit that Townsquare “expropriated” the photo and “displayed” it in the article. 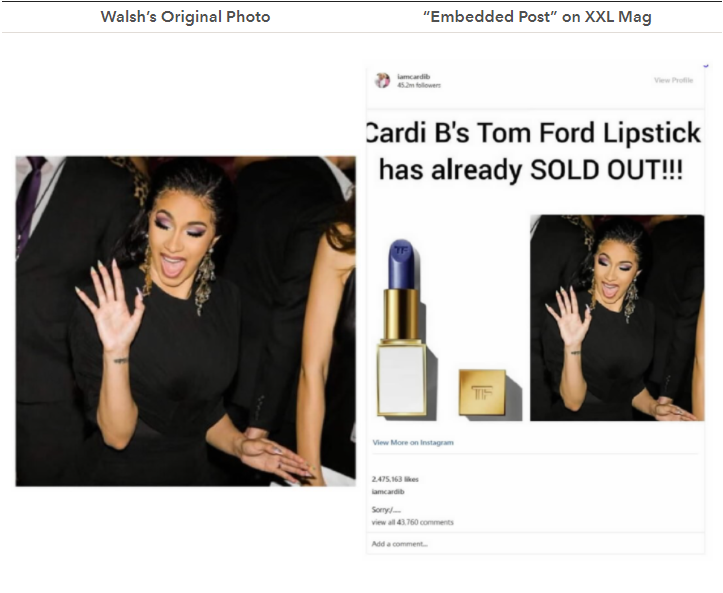 The article focused on Cardi B’s new lipstick shade—called Cardi—sold by Tom Ford Beauty, as well as her time at the 2018 New York Fashion Week and her recent fight with celebrity rapper Nicki Minaj.  The embedded post was from Cardi B’s personal Instagram page announcing that the Cardi lipstick had quickly sold out.  She captioned the post “Sorry:/…..,” which appeared to be her response to criticism that she did not deserve to have a lipstick named after her.  The embedded post was removed from Townsquare’s article shortly after Walsh filed suit.

The court analyzed the case under section 106 of the Copyright Act, which “grants a copyright owner the exclusive rights to authorize the reproduction, distribution, and preparation of derivatives of the owner’s work.”  The court explained that there is an “inevitable tension” between the copyright owner’s “exclusive rights” and the right for the rest of us to express ourselves by referring to “the works of others.” Thus, the court recognized, the “fair use” doctrine “mediates between these two sets of interests” and allows copyright defendants to “avoid liability if they can establish that they made ‘fair use’ of the copyrighted material.”

It is the alleged infringer’s burden to show fair use, which involves four factors: “(1) the purpose and character of the use; (2) the nature of the work; (3) the amount and substantiality of the portion used in relation to the copyrighted work as a whole; and (4) the effect of the use upon the potential market for or value of copyrighted work.”  Id.

For the first factor, the court focused on “whether and to what extent the new work is transformative.” Here, the court found that the article and Instagram post wholly transformed the context of the photo and did not “merely supersede” the original work.  Indeed, the court noted that the photo was not used to show Cardi B at the fashion show (its original purpose) and that it did not “in and of Itself pertain to anything reported on in the article.”  Accordingly, the court found that this factor strongly favored finding fair use.

The court then addressed the second factor—the “nature of the work,” which the court said required it to determine whether the work was “creative” or “factual” and also whether it was “unpublished” or “published,” with protections more likely to apply if the work was both “creative and unpublished.”  Here, the court found that the photo was “informational and creative,” which might normally favor giving it copyright protection. But the court also said that photos “are further from the core of copyright protections than creative or fictional works would be” and that this “render[ed] the degree of creativity a relatively neutral consideration.” Accordingly, when it also noted that the photo was “previously published,” the court held that this factor weighed in favor of finding fair use.

The court found that the third factor—the portion of the copyrighted work that was used—also favored fair use.  Even though the entire photo was used, the court explained that Townsquare used the only image that could have accomplished the article’s purpose of explaining the social media post and also that it used the same portion of the work as Cardi B did in her Instagram post.

Lastly, the court also found that the fourth factor—the effect of allowing use—favored fair use. Indeed, the court concluded that it was “implausible” that Townsquare’s use of the photo “would compete with [Walsh’s] business or affect the market or value of her work.”