The Way We Were: The NLRB’s Time Machine Resets the Clock on Employer Work Rules and Joint Employer Status
Blog DW HR Blog

With the end of 2017 right around the corner, the National Labor Relations Board (NLRB or Board) issued a duo of pro-employer decisions that continue to chip away at and erase its jurisprudence during the Obama Administration.

The first decision, Boeing Company and Society of Professional Engineering Employees in Aerospace, IFPTE Local 2001, took on work rules. The Board overturned the 2004 Lutheran Heritage standard that held that employers violated the National Labor Relations Act (NLRA) by maintaining a workplace rule that an employee could “reasonably construe” to prohibit the employee from exercising the right to engage in protected activity under the NLRA, regardless of whether the rule actually expressly prohibited protected activities, was not applied to restrict such activities, or was not adopted in response to those NLRA-protected activities.

As you might imagine, the standard made it difficult for employers to implement and enforce workplace rules necessary for company operations. The Obama-era NLRB used the standard to strike down and deem illegal a number of vanilla, commonly-used policies, including social media, at-will employment, non-solicitation, non-disparagement, etc.

In place of the “reasonably construe” standard, the NLRB set forth a new test for evaluating facially-neutral policies/provisions. The new test is a two-prong analysis in which (1) the “nature and extent” of a challenged policy/provision’s “potential impact on NLRA rights”; and (2) the “legitimate justifications associated with the rule” are reviewed.

The decision also laid out three categories the Board will use to classify work rules: 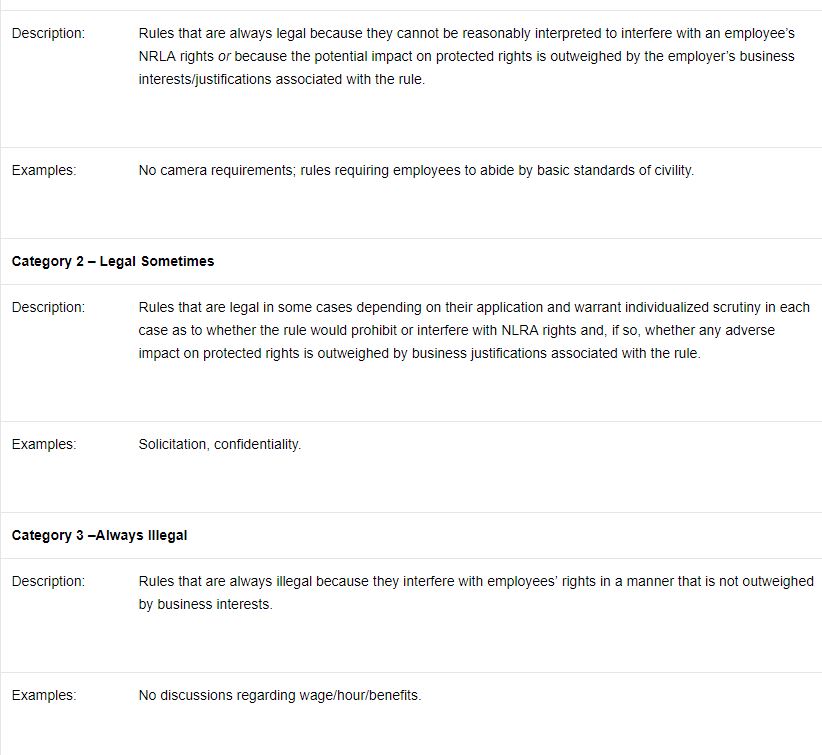 Most rules will fit in the second category, but there is some black and white. As 2018 nears, now is a great time to review, revise, and revamp those Employee Handbooks, policies, and rules.Specific to the underlying facts in the case, the Board found that Boeing’s policy that prohibited employees from having cameras to take photos or videos without a business need was valid. The Board found that while the rule could potentially affect employees from exercising NLRA rights, that impact was outweighed by the business justification, i.e., national security concerns.

The second case, Hy-Brand Industrial Contractors Ltd. and Brandt Construction Co. In it, the Board overturned the 2015 Browning-Ferris Industries case that had vastly expanded the definition of joint employer, which held that a company and its contractors or franchisees could be a single-joint employer, even if the company had not exerted overt control over the employees’ terms and conditions.

In overturning Browning-Ferris, the Board held:

We return today to a standard that has served labor law and collective bargaining well, a standard that is understandable and rooted in the real world….it recognizes joint employer status in circumstances that make sense and would foster stable bargaining relationships.

The decision returns the “joint employer” test to the “direct and immediate” control standard and ditches the “indirect control” or “ability to exert such control” standard of Browning-Ferris. Going further, the Board found:

A finding of joint-employer status shall once again require proof that putative joint employer entities have exercised joint control over essential employment terms (rather than merely having “reserved” the right to exercise control), the control must be “direct and immediate” (rather than indirect), and joint-employer status will not result from control that is “limited and routine”.

The return of the “direct and immediate” standard is a welcome return to businesses. It allows businesses to enter into complex work relationships without the threat of being found a joint employer and liable for another company’s worker’s actions.

While one could say that these decisions are a sign of a new day, they really are not. They are really a sign of things going back to the way they used to be. It will be interesting to see where the NLRB’s time machine takes us next year!