Investor attention on the clean meat industry, which has been described as ‘being on the cusp of the biggest economic transformation, of any kind, for 200 years’, is growing significantly. Melissa Campbell looks at the benefits, market growth and regulatory matters from both a consumer and investor perspective and the continued focus on the highly anticipated first cultivated meat product hitting the market soon.

What is clean meat?

‘Clean meat’ is a term used to describe real meat that is lab-grown, in vitro cultivation of animal cells rather than meat from an animal’s body.

Clean meat should not be confused with plant-based products that are now readily available on the market and made from plant proteins such as wheat, pea protein or potato, and natural colourings like beetroot juice that usually provide the ‘blood’. Examples of brands that have been developing and marketing plant-based products are Quorn and Beyond Meat.

Studies have shown that plant-based products are not necessarily more sustainable due to the fact that a higher amount of plant-based substitutes need to be consumed to replace animal proteins and calories. Therefore whilst plant-based products remain the ‘true’ vegetarian option, the clean meat industry provides an exciting new alternative for those consumers who choose to eat ‘meat-free’ for animal and environmental reasons.

With clean meat products coming to market in the not too distant future, there is an argument that plant-based products are merely keeping the seat warm until this time.

In 2013, the first ‘real meat’ burger produced without harming any animals hit the headlines. Since then a number of food technology companies such as Memphis Meats, Shiok Meats and BluNalu have been focused on developing animal-free beef, pork and seafood, and more recently dairy-based products such as cheese and eggs, in order to bring them to market in the near future.

The potential benefits of clean meat are significant:

Whilst the clean meat market is still in its early stages, it is currently subject to rapid growth as a number of food technology companies are competing to bring the first cultured meat product to market. This attractive market growth is due to the increasing number of start-ups that are entering the market and, with them, the growing number of investors, including our AIM-listed client, Agronomics Limited. Between 2017 and 2018, investments in clean meat start-ups grew by an impressive 85%.

The success of Beyond Meat, the company that produced the world’s first ‘beef-like’ plant-based burger gives us just a glimpse of what we can expect to see when cultivated meat companies go to market. The share price of Beyond Meat increased by a staggering 500% within the first three months of it going public and raised US$240 million upon its IPO. Shortly after this, the value of Beyond Meat rose to nearly US$3.8 billion!

In the US, the Food and Drug Administration (FDA) and the Department of Agriculture (USDA) jointly regulate safety and labelling of cell-based meat, whilst in the EU the European Commission (EC) can issue Novel Foods authorisations in relation to the same. Both systems seek to ensure that clean meat products hitting the market are ‘safe, wholesome and unadulterated’. 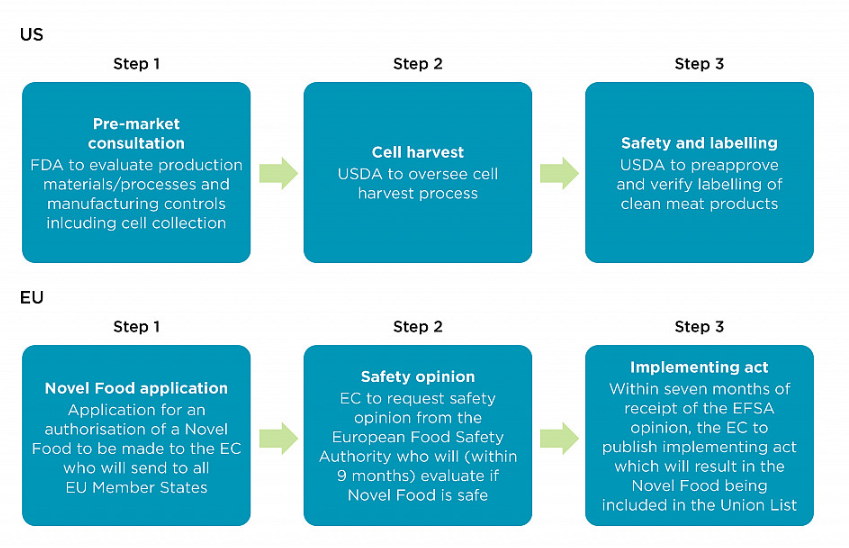 Given that some clean meat products could become classified as ‘genetically modified’ (GM) food, they will also be subject to safety assessments by the EFSA (see Step 2 under the EU procedure above). Such assessments will include detailed studies of whether the foods could be toxic, their nutritional value, and whether they could cause allergic reactions. GM foods will not be authorised if they present a risk to health, mislead consumers, or have less nutritional value than their non-GM counterpart.

The regulation procedure goes even further into how GM foods are labelled – a topic that is sparking much debate.

From a UK law perspective, it is unclear how clean meat products will be regulated when the UK eventually leaves the EU. It is more than likely, however, that the UK will adopt a similar approach to that of the EU.

We have specialists at Hill Dickinson in relation to the Novel Foods authorisation procedure within the EU and are able to advise on the process every step of the way. For further information on the information outlined above, please do not hesitate to get in touch with one of our contacts noted below.