The Rhode Island Department of Revenue recently released Advisory #2018-21 (PDF), which deals with “Section 965” income. The advisory states that the repatriation transition tax is not deferrable for Rhode Island state tax purposes.

On December 22, 2017, President Donald Trump signed into a law a bill popularly known as the Tax Cuts and Jobs Act (TCJA). A new Internal Revenue Code (IRC) provision introduced by the TCJA is Section 965, which provides for a transition tax on untaxed foreign earnings of certain specified foreign corporations as if those earnings had been repatriated to the US.

Certain taxpayers may make an election under Section 965(h) to pay the transition tax in installments over an eight-year period. This election does not, however, defer recognition of Section 965 income, which must be included on a taxpayer’s federal return for the last taxable year beginning before January 1, 2018.

Note that not all states allow transition tax installment payments.

Like many states, Rhode Island uses federal taxable income, as determined under the current IRC (but without special deductions allowed under federal law), as the starting point for determining taxable income for purposes of the business corporation tax. State law then further modifies the federal taxable amount. See: R.I. Gen. Laws § 44-11-11. 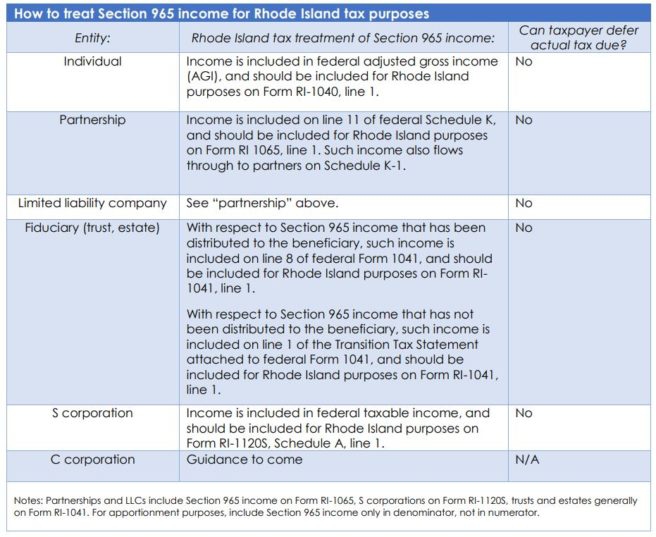 The Department advised taxpayers to file amended returns if they filed a return that does not reflect this guidance.