Update: How the U.S. Compares to Europe on Biosimilar Approvals and Products In the Pipeline

As pharmaceutical drug costs attract increasing media attention and political scrutiny, a growing number of biosimilar drugs are set to enter the U.S. and European markets in the coming years. Global sales for the top nine branded biologic drugs were estimated to total $63 billion in 2016[1]. Competition in the heavily regulated marketplace for these blockbuster therapeutics is expected to substantially impact the pharmaceutical industry and national health systems. To date, the U.S. has considerably lagged behind Europe’s expansion of biosimilar drug options. The RAND Corporation estimates that biosimilar products can save the U.S. health system approximately $54 billion over the next decade as discussed here.

Since 2005, the biosimilar regulatory framework in Europe has been implemented through the Committee for Medicinal Products for Human Use (CHMP) under the European Medicines Agency (EMA). The CHMP provides initial assessments for marketing authorization of new medicines that are ultimately approved centrally by the EMA. Since Sandoz’s somatotropin biosimilar Omnitrope® was first authorized on April 12, 2006, an additional 35 out of 40 applications have been approved in Europe. Three of the authorizations have been withdrawn post-approval by the marketing authorization holders (Table 1).

The U.S. did not implement a regulatory framework for biosimilar evaluation until after enactment of the Biologics Price Competition and Innovation (BPCI) Act of 2009. Given that the first U.S. biosimilar drug was approved almost a decade after the first in Europe, the number of authorized biosimilar drugs in Europe far exceeds the number of biosimilars approved in the United States. Sandoz’s filgrastim biosimilar Zarxio® received the first U.S. approval in 2015, whereas nine filgrastim biosimilars have been approved in Europe dating back to multiple authorizations in 2008. Zarxio® (in the U.S.) and Zarzio® (in Europe) are biosimilar to the reference product Neupogen marketed by Amgen and originally licensed in 1991. Subsequent to Zarxio’s approval, only six other biosimilar drugs have gained U.S. approval to date (Table 2). As illustrated in the following graph, the EU’s significant head start led to the existent imbalance in the number of biosimilar drugs available in the respective markets. 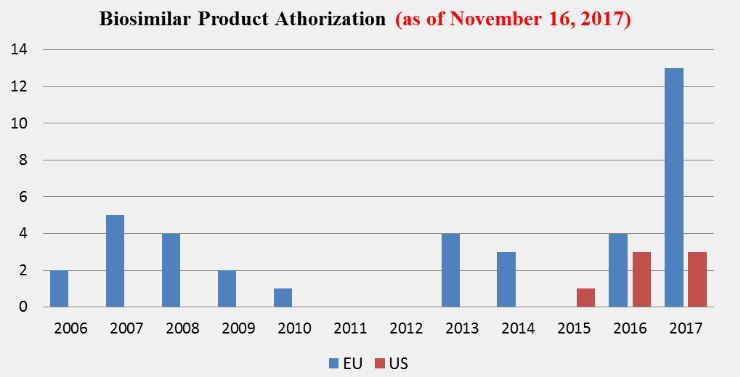 Currently, thirteen biosimilar applications are under review by the EMA for marketing authorization (Table 3). As an increasing number of U.S. patents expire on blockbuster biologic drugs, the number of abbreviated biologics license applications are also increasing. Biosimilars for at least eleven different original biologics are currently navigating the FDA’s biosimilar pathway or are in late stage development (Table 4). 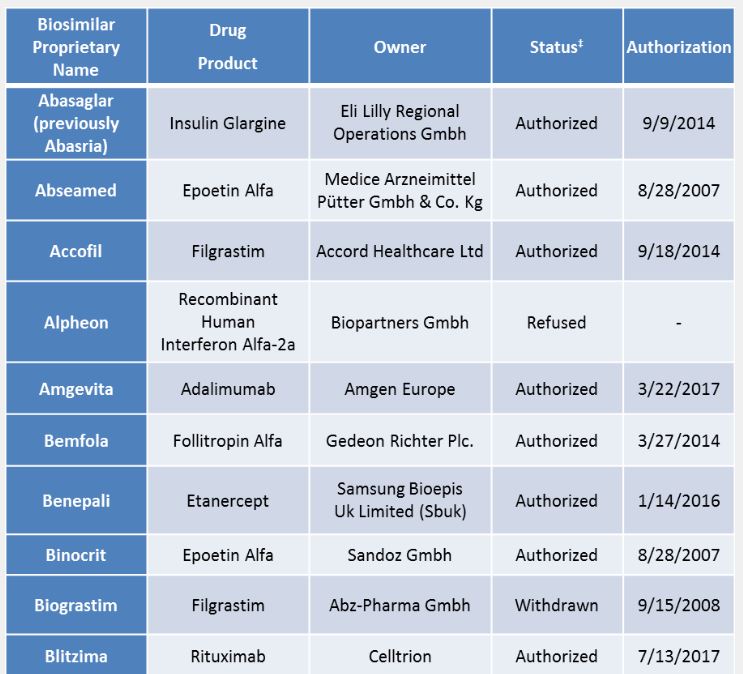 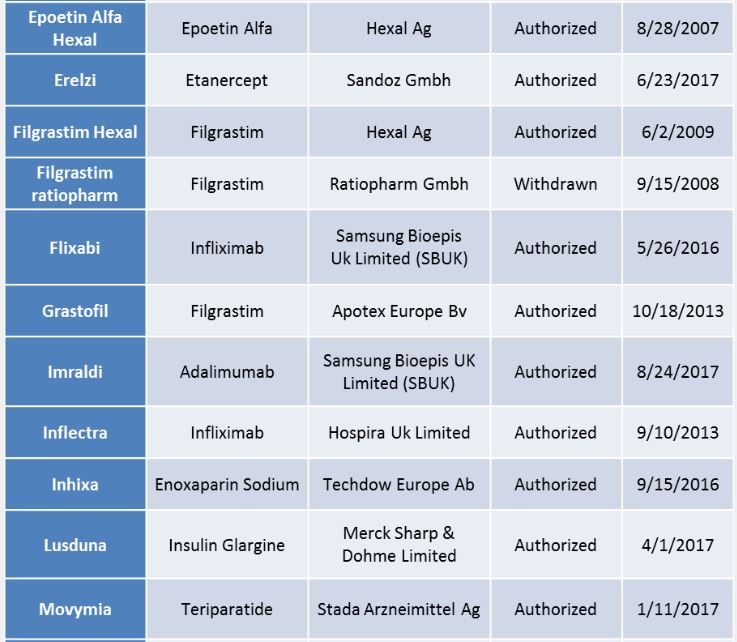 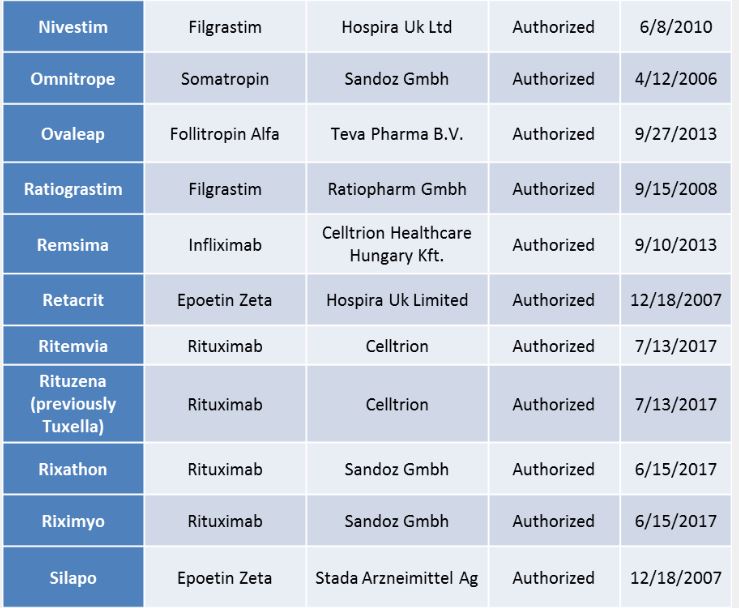 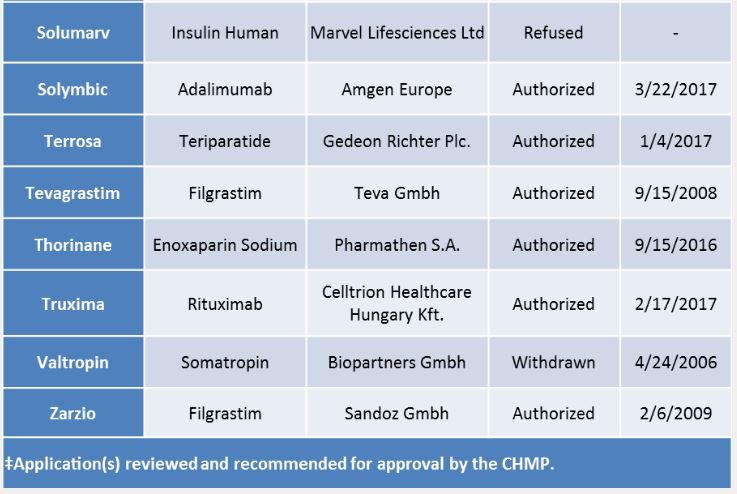 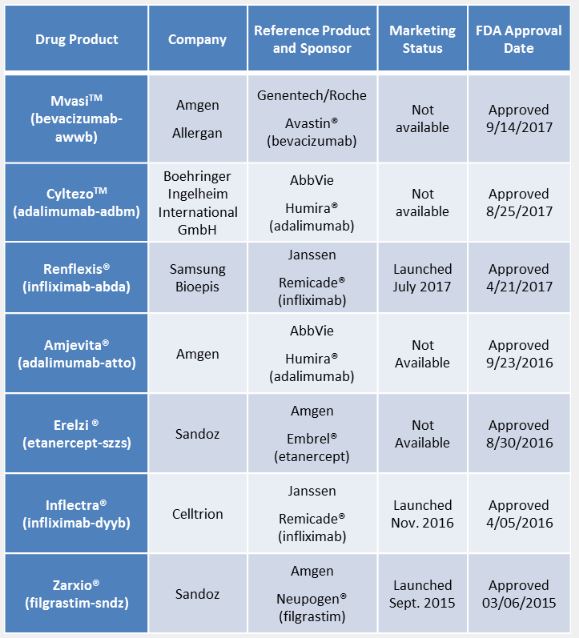 Table 4. Biologics with recent or nearing primary patent expiry in the U.S. that have biosimilars in the regulatory pipeline. 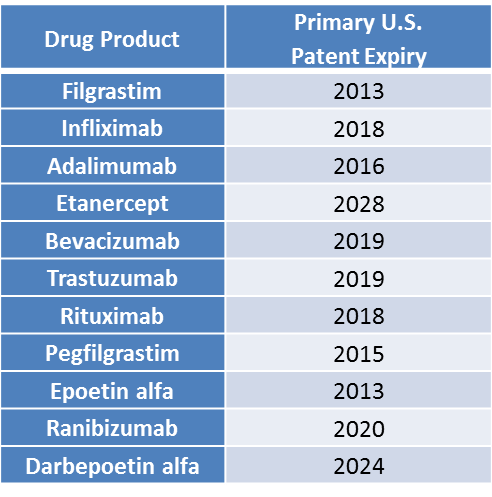