As discussed in Eversheds Sutherland (US) LLP’s Quick Call: Legislative and Tax Reforms – What This Could Mean for Business Development Companies, Congress is currently negotiating a tax reform package that, if passed, generally is expected to have a wide-ranging impact on the overall economy. This legal alert discusses important developments that may affect closed-end funds, including business development companies (BDCs), and the portfolio companies in which closed-end funds invest.

On December 15, 2017, the US House of Representatives and the US Senate Conference Committee released a Conference Report that reconciles the differences between the House’s and Senate’s separate tax bills. The Conference Report and the accompanying Joint Explanation have nearly 1,100 combined pages of legislative and explanatory text. The House and Senate expect to vote on the Conference bill during the week of December 18, 2017. If the legislation passes in both chambers, the President could sign the bill into law before December 31, 2017. Given the fast-moving process, some Congress members already have expressed a desire to introduce technical corrections legislation if the tax bill is signed into law.

Some of the key provisions that may affect closed-end funds, BDCs and certain portfolio companies are listed below. 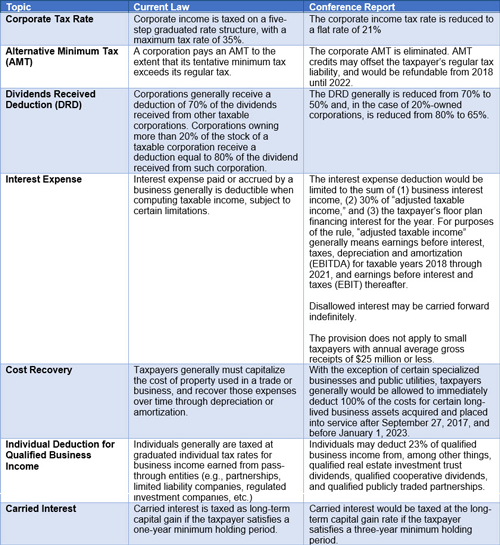