At the end of last year, the FCA published a consultation paper and policy statement on its proposed reforms to the way banks charge for overdrafts. This forms part of the regulator’s overall review of the consumer credit market; following previous interventions on high-cost short-term credit, rent-to-own and credit cards.

The table below sets out a summary of the FCA’s proposed measures for the overdraft market: 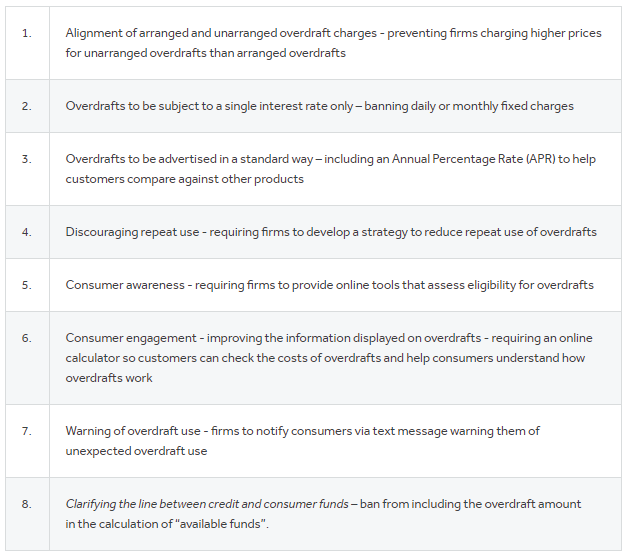 The FCA is therefore proposing a number of pricing interventions which it hopes will protect consumers:

Despite fears from the industry that prescribing how overdrafts are charged could stifle innovation, restrict competition and the availability of overdrafts, the FCA is pressing ahead with its proposals with the view that they are necessary for consumer protection. Although by reducing the price of unarranged overdraft fees the FCA is aware that this may mean the price of arranged overdraft fees increases, the FCA hopes that the price simplification and disclosure proposals will increase the competitiveness of such fees overall.

Repeat use of overdrafts

To deal with the FCA’s concern with consumers’ repeated use of overdrafts, the FCA is proposing that firms be required to develop a strategy to reduce such repeat use. The strategy will need to be provided to the FCA (and an updated copy would need to be provided following any substantial changes). Firms will need to implement the strategy and monitor its progress, reporting on the outcome after 6 and 12 months respectively.

The consultation paper also incorporates a policy statement for the competition remedy rules for the overdraft market that the FCA consulted on earlier in the year. To increase consumer awareness and engagement around overdrafts, the FCA is requiring firms to provide an online / banking app eligibility tool to indicate whether a consumer is eligible for an overdraft.

Key information about overdrafts will need to be presented clearly and firms will be required to provide an online calculator so consumers can work out the costs of the overdraft.

In addition, consumers should be automatically registered to receive alerts, either by text message or via another channel, warning them of overdraft use that may result in charges.

These requirements only apply to banks with at least 70,000 personal current accounts.

Private Banks are excluded from the FCA’s proposals; however, it is important to note that the definition of “private bank” may not cover all such firms. The definition requires that half of the bank’s personal current account customers are “eligible individuals” who are individuals who hold assets of not less than £250,000 in the previous 12 months either in cash or in transferable securities (i.e. shares and bonds). This would not include assets held in collective investment schemes for example.