WA work health and safety reform: where are things at?

In an article published in July 2018, we discussed the then proposed Work Health and Safety Bill 2019 (WHS Bill) and some of the recommended changes suggested by the Ministerial Advisory Panel (MAP). The WHS Bill was introduced into the Western Australian Parliament on 27 November 2019, and passed by the Legislative Assembly on 20 February 2020. It was then introduced into the Legislative Council.

In this Insight, we provide a summary of the WHS Bill and its progress so far.

It is intended that the WHS Bill will replace the existing Occupational Safety and Health Act 1984 (WA) (OSH Act) and various other safety legislation (including the Mines Safety and Inspection Act 1994).

The WHS Bill contains the majority of provisions contained in the ‘model WHS laws’ in place in most of Australia and will become the primary legislation for workplace safety and health across all WA industries.

The Government does not have a majority in the Legislative Council, so it is uncertain exactly when the WHS Bill is likely to be passed, and its final form. However, the previous Liberal-National Government had formally committed to implementing the model WHS laws. Further, there appears to be strong momentum behind this reform. Therefore our expectation is that the new WHS laws will be passed by the Parliament some time in 2020, perhaps with some modifications to more contentious proposals (e.g. industrial manslaughter), and most likely given full effect in 2021.

In this Insight, we consider six key elements of the WHS Bill:

Duty of care imposed on ‘PCBUs’

The WHS Bill dispenses with the use of the terms ‘employer’ and ‘employee’ and imposes duties relating to workers on ‘PCBUs’ .

The WHS Bill adopts a broad definition of ‘worker’ to recognise the changing nature of employment relationships and to ensure that the protections in the legislation extend to all types of workers. It sets out a non-exhaustive list of persons who would meet the definition of worker, including employees, contractors/sub-contractors, labour hire company employees, apprentices, work experience students and volunteers.

The primary duty of care under the WHS Bill requires that a PCBU must ensure, so far as is reasonably practicable, the health and safety of its workers and those workers who are influenced or directed by the PCBU, while the workers are at work in the business or undertaking. The WHS Bill imposes further duties on PCBUs, such as those with management or control of a workplace and those that design/manufacture plant, substances or structures.

In essence, the duties imposed by the WHS Bill mirror the duties imposed by the current law, such as ensuring the health and safety of other persons is not put at risk from work carried out; the provision and maintenance of a work environment without health and safety risks; and the provision and maintenance of safe structures and plant etc.

However, organisations should pay careful attention to the broad definition of worker (including those workers who are influenced or directed by the organisation) to ensure that the organisation’s safety procedures and systems adequately protect those persons to whom the organisation owes a duty.

As to what is considered ‘reasonably practicable’, the WHS Bill provides that this requires consideration of factors such as:

Whilst these elements remain essentially unchanged, the WHS Bill makes it clear that cost is the last factor to be considered.

Officer’s liability and due diligence

The WHS Bill provides that an officer of a PCBU must ensure that the PCBU for which they are an officer, complies with its duties or obligations under the WHS Bill.

‘Officer’ is defined in the WHS Bill to include directors, company secretaries, and any person who has capacity to affect the company’s financial standing or who makes or participates in decisions affecting the whole or a substantial part of the business. Any person in senior management, e.g is part of the ‘C suite’, is likely to be an officer for this purpose.

An officer’s duty is a personal duty and officers and senior managers must exercise due diligence and be proactive in ensuring that they comply with it. They may receive assistance from others but the duty cannot be transferred or delegated to someone else.

Due diligence is defined as a ’personal’ obligation on the officer. The discharge of this duty will require the officer to take steps that include the following:

Importantly, the duty of due diligence placed on officers is a “positive and continuous” duty that operates separately to the duties imposed on PCBUs. This is in contrast to the position under current safety legislation where an officer may be deemed to have contravened safety legislation but only if there has been a contravention by the employer.

If more than one person (including a business that is a PCBU) has a duty in relation to the same matter, each person with the duty must, so far as is reasonably practicable, consult, cooperate and coordinate activities with all other shared duty-holders.

Where a PCBU regularly ‘shares a duty’ with another duty-holder, the PCBU should ensure arrangements are in place for engaging in appropriate consultation. This will mean businesses that are joint ventures, principal contractors and sub-contractors, customers and suppliers, or many other business arrangements, will be subject to this specific new duty.

With the broader definition of worker, this means that the PCBU must consult with a broad group of people including contractors, sub-contractors and volunteers.

An officer of a PCBU may also be charged with industrial manslaughter offences but additional elements of the offence must be proven. This includes establishing that the PCBU’s conduct was attributable to any neglect on the part of the officer, or if the conduct was engaged in with the officer’s consent or connivance. So both a company and an individual officer could be charged with industrial manslaughter.

A PCBU is required to ensure the health and safety of its workers, so far as is reasonably practicable. The term ‘health’ has been further defined in the WHS Bill to clarify that it is used in its broadest sense and covers both physical and psychological health. ‘Health’ will therefore capture psychosocial risks to health like stress, fatigue and bullying, the same general obligations to prevent this type of harm exist as with other physical risks.

In this regard it is noted that an area of focus under the Strategic Plan 2019-2022 of the WA Commission for Occupational Safety and Health is reducing the risk of mental illness and poor psychological health outcomes. In practice, we have recently observed that Worksafe WA places an increased emphasis on risks to psychological health in its enforcement and educational activities.

Under the WHS Bill, these penalties will further increase to: 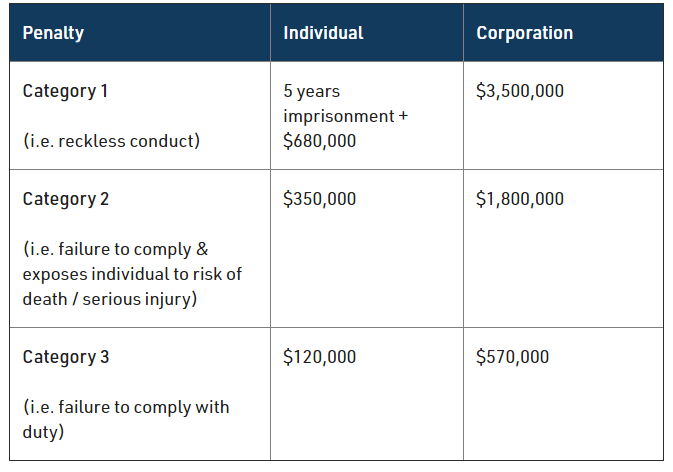 In addition to penalties, the WHS Bill also provides for powers relating to sentencing, including the making of adverse publicity orders, orders requiring the undertaking of a work health and safety project, and orders requiring specific safety training.

Other changes that will be introduced by the WHS Bill include:

What steps should employers take to prepare?

A key step in discharging duties under WHS legislation is having a sound understanding of the legislation and its impact on a business. Therefore, it is critical that employers familiarise themselves with the provisions of the WHS Bill and satisfy themselves that their WHS systems and procedures are adequate to meet the duties and obligations imposed by the WHS Bill.

Employers in WA, and others likely to be affected by these changes, should consider the new responsibility to positively engage and consult with others (e.g. contractors, suppliers and clients) in relation to how health and safety is being managed in the workplace.

Consideration should also be given to the increased responsibilities on boards, directors and senior management and how they can prepare for the introduction of the new WHS legislation in WA.

Directors and senior managers should ensure that they are familiar with the changes to the WHS legislation and their personal obligations under the proposed laws (especially the ‘due diligence’ obligation), and ensure that they receive the necessary support from the business.