Manner of manufacture and software-based inventions: What does it mean for an invention to involve “an improvement in the computer”?
Blog IP Whiteboard

Whether inventions relating to the use of a computer are patentable according to the ‘manner of manufacture’ test has for many years been unclear in Australia. This uncertainty, together with inconsistencies in how the law has been applied by the courts and the Australian Patent Office (APO), were just some of the contentious issues recently considered by a full bench of five judges from the Federal Court in Encompass Corporation Pty Ltd v InfoTrack Pty Ltd (NSD 734/2018). Such was the significance of this hearing that the Commissioner of Patents and the Institute of Patent and Trademark Attorneys of Australia (IPTA) both applied to intervene and sought leave to be represented and make submissions at the hearing.

Central to the dispute between the parties are Encompass’ two innovation patents, both entitled “Information displaying method and apparatus” (Patents). The Patents relate to methods for an electronic processing device to access information from different databases (such as Land Titles Office, ASIC and a motor vehicle registry) in a seamless manner. Users are required to pay for reports obtained from the searches conducted of the various databases. Encompass claimed that InfoTrack infringed the Patents by making available a computer platform entitled ‘Reveal’.

At first instance, Justice Perram found that the invention claimed in each of the Patents was novel and involved an innovative step, but was not a manner of manufacture. With respect to the ‘manner of manufacture’ requirement, Justice Perram adopted the two-limb test established by the High Court in National Research Development Corporation v Commissioner of Patents [1959] HCA 67; (1959) 102 CLR 252 (NRDC), which involves asking whether the invention consists of an artificially created state of affairs and whether it could be said to have economic significance. The inventions according to the Patents were said by Justice Perram to pass both limbs of the NRDC test.

Justice Perram therefore concluded that the inventions of the Patents did not involve any improvement in the functionality of the computer nor the computer itself. As a result, the inventions were not for a manner of manufacture. Justice Perram acknowledged that the Patents described a method that resulted in the computer being used to do something it had not been used to do before – by using a network representation and querying remote data sources – and that requiring the users to purchase the search results provided an innovative step. These also enhanced the experience for the user of the computer. However, these matters did not improve the functionality of the computer because, after the consideration of the prior art, the methods, individually, were not new and were well-known.

Encompass sought to appeal against Justice Perram’s decision, and the appeal was heard by a full 5 member bench of the Full Federal Court on 8 – 9 November 2018. It is likely that the outcome of that hearing will be known by mid-2019.

One of the key questions for determination by the Full Court is whether the approach taken by Justice Perram sets an unreasonably high threshold for computer-implemented inventions, by requiring the inventions to make improvements to the computer for the inventions to be patentable.

Since 2016, there has been an increase in hearings before the APO resulting from objections raised during examination against applications for computer or software-related inventions that were deemed not to be directed to patent-eligible subject matter. Over the course of 2018, there were 17 such hearings. 16 of these matters resulted in the patent applications being rejected on the basis that the invention claimed was not for a manner of manufacture. Notably, as with the inventions of the Encompass Patents, many of those inventions were found to be novel and involved an inventive step. However, the inventions involved the combined use of well-known computing mechanisms, and therefore were said to be not patentable.

Which inventions passed the ‘manner of manufacture’ test in 2018? 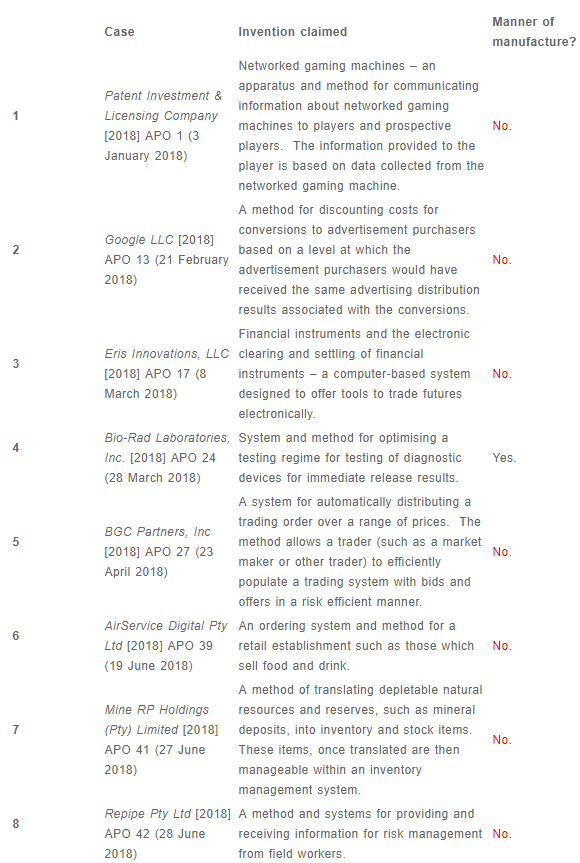 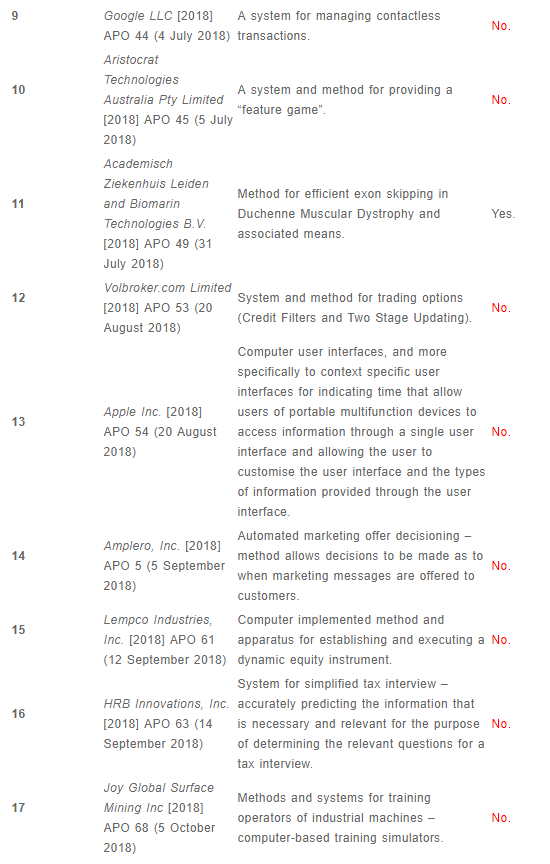