This article discusses AI artwork, the Copyright Act 1968 (Cth) and some key cases to consider the question: whether a creator of AI artworks can or should be entitled to obtain copyright protection in Australia?

The artistic community has been divided over the news that an artwork generated by artificial intelligence (AI) won first place in the Colorado State Fair’s fine art competition. The ‘creator’ of the artwork used an online AI text-to-image program to generate the winning artwork.

Unsurprisingly, the decision attracted criticism from people believing that ‘art’ should be created through traditional (ie. human) means. This debate over whether works generated by use of a computer program can be ‘art’ also raises the interesting legal issue of whether AI-generated artwork can or should attract copyright protection.

This article discusses AI artwork, the Copyright Act 1968 (Cth) (Act) and some key cases to consider the question: whether a creator of AI artworks can or should be entitled to obtain copyright protection in Australia? They conclude that the answer is probably not, and that legislation, or a test case, will be required to resolve the question with greater certainty.

They do not consider in this article whether copyright in AI artworks might be claimed by the author of the AI program which was used to produce the works.

‘AI artwork’ refers to the use of artificial intelligence programs to generate works which are intended to be ‘art’. AI artwork generators produce artwork in response to text instructions entered by a user. Typically, a user is given a set amount of ‘free’ generations by the program, and must then pay for the generation of further works on either a subscription or a per use basis.

In using an AI generator, a user may select a pre-designed theme (e.g. cyberpunk) and then enter text instructions such as ‘a sunny beach on a deserted island.’ A user may also provide text prompts to generate the artwork. Prompts may be a single word or extensive instructions. Finally, depending on the particular program, a user may also be able to modify and continue to edit the initial artwork which the AI generates.

For example, if you use Nightcafe (a well-known AI artwork generator) with the instructions “AI Copyright Lawyer in the style of Andy Warhol”, it will generate the following: 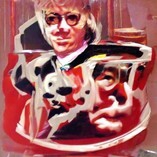 AI artworks – is it just phonebooks and TV guides all over again?

So whether or not it is ‘art’, does copyright subsist in an AI artwork?

When determining whether copyright subsists in a work, the questions to consider are:

If the work is going to be protected by copyright, it will need to be considered to be an ‘artistic work’. That term is relevantly defined in s10 of the Act to include:

(a) a painting, sculpture, drawing, engraving or photograph, whether the work is of artistic quality or not; [...]

(c) a work of artistic craftsmanship whether or not mentioned in paragraph (a) [...];

There is an argument that an AI work does not fall within one of those descriptors as they all suggest a process of human rather than computer generation. However, as that question overlaps with the question of authorship, we do not consider it further here.

In short, IceTV produced a subscription-based online programme guide for television (IceGuide). The IceGuide included weekly TV schedules, including title information, broadcast times and a synopsis of the TV show. The IceGuides were developed, at least in part, using weekly schedules published by Channel Nine (Nine).

A key issue in the case was whether the IceGuide met the criteria for originality under the Act. As restated in the IceTV case, the originality principle refers to a requirement that the works originate with the author and do not merely reproduce an existing work:

“Originality for this purpose requires that the literary work in question originated with the author and that it was not merely copied from another work. It is the author or joint authors who bring into existence the work protected by the Act. In that context, originality means that the creation (i.e. the production) of the work required some independent intellectual effort, but neither literary merit nor novelty or inventiveness as required in patent law”

Relevantly, the High Court stated that in previous cases, the ‘skill and labour’ factor used when determining originality had been given too much weight and was not required under the Act.[2] Instead, the High Court considered that the correct test is whether the work has originated with the author through some independent intellectual effort.[3]

That finding suggests that a determination in respect of originality is likely to depend on:

Those factors will enable determination of whether the work has met the requirements that:

As mentioned above, copyright subsists within a work which is authored by an Australian citizen, resident or a country to which Australia has promised copyright protection under international treaties and conventions (for example, the Berne Convention).

The IceGuides were developed, at least in part, through the use of a computer program. However, the computer generated input was supplemented with manual input from Nine employees. In considering the author of the IceGuide, the High Court did not make a definite conclusion as to who precisely authored the document, but it did conclude that the authorship aspect had been made out.[4]

The compilation of the directories was overwhelmingly the work of the Genesis Computer System or its predecessors. The selection of data and its arrangement in the form presented in each directory occurred only at “the book extract” or “book production” process. The compilations which emerged from the operation of the computer system do not originate from an individual or group of individuals. Indeed, none of the individuals who contributed to the production of the directories had any conception of the actual form in which they were finally expressed

This conclusion was reached despite some manual input from human editors being used to produce the phone directories:

Whilst humans were ultimately in control of the software which did reduce the information to a material form, their control was over a process of automation and they did not shape or direct the material form themselves (that process being performed by the software)

On the originality point, the Full Federal Court did not consider that originality required creativity or novelty but rather some intellectual effort by the author. Evidently, the manual input from human editors in the production of the phone directories was deemed to be insufficient to meet the intellectual effort standard required under copyright law. It was also explicitly stated that the person that engages the mechanical processes, such as a computer process to produce the compilation, will not be the author of the works.[5]

AI across the world

Similarly to Australian copyright principles, US copyright law protects ‘the fruits of intellectual labour’ which are produced with human involvement. Accordingly, the USCO states that it will not register works which are created by a machine which operates ‘without any creative input or intervention from a human author.’[6]

However, in his application and subsequent appeal, Thaler did not attempt to claim that the artwork he was seeking to register was created with the contribution of a human author. Accordingly, whilst the USCO flagged that an argument could be made around the degree of human effort required in directing a computer, this issue was not considered by the USCO.

The US and Australian positions can be contrasted with the UK position, which is far less ambiguous. The UK has enacted legislative amendments which allow computer generated artworks to be protected by copyright (see here). This approach may be controversial to some art lovers, however, it would assist in removing the uncertainty which currently exists in Australia and the US.

Does copyright subsist within AI artworks?

First, is it an artistic work, as protected by the Act? That question overlaps with the following questions:

Second, do AI generated artworks meet the test for originality as set out in the IceTV case?

In our view, the ‘independent intellectual effort’ test set out in the IceTV case does not set a particularly high bar for originality. Entering text into an artwork generator does not require the same level of creativity as being able to paint an artwork, but still requires a level of independent intellectual effort which may, in appropriate cases, be sufficient to meet this test.

We expect that originality would be considered on a case by case basis, depending on the level of effort that a creator puts into the generation of an artwork. For example, if you enter the word “house”, an AI artwork generator might create the following:

If you enter “Red brick house within a forest with roses on the front lawn in the style of Vincent Van Gogh trending on Artstation”, it might create the following:

Arguably, the level of intellectual effort varied between these two outputs. However, the output arguably remains similar. Accordingly, when determining originality, Courts are likely to need to grapple with two distinct issues:

Second, is there sufficient human involvement in the creation of an AI artwork to constitute human authorship? The Phone Directories case seems to suggest that a copyright claim over AI generated artwork is likely to fail in Australia, just like in the US.

However, when you consider the Full Federal Court’s reasoning, there are some clear differences in the process which was used to generate the phone directories compared to the process for creating an AI artwork. For instance, in the Phone Directories case, human contribution only occurred in the later stages of the development of the phone directories. Humans did not direct the machines in the creation of the work, and no person involved in the development saw the final product.

This process can be contrasted with the process used to generate an AI artwork. In the case of AI generated art, the creator provides initial instructions for the specifications of the artwork and is able to provide additional instructions to modify the artwork, if they are not satisfied with the initial versions created by the AI. In this way, the human ‘artist’ is involved with the creation of the art at all steps of the process. It is entirely possible that this process demonstrates sufficient human involvement so as to meet the human authorship requirement.

Where do we go from here?

Ultimately, the only way that the ambiguous situation in Australia can be resolved with any certainty is through a legislative amendment, such as that passed in the UK, or through a test case by a superior Court involving and considering AI generated artwork and the application of copyright principles.

Until this time, we can only speculate on the approach which the Court would take to resolve this issue.

One thing is for certain, this is more than just a rehash of principles set out in IceTV or the Phone Directories case.