UK dealmakers flock to the US in 2017

UK firms are investing in US firms at an impressive rate. In 2017, US$109.3 billion was invested across 168 transactions—a record year both in terms of value and volume. On a dollar basis this far exceeds even the peak of the credit boom in 2007, when British companies backed US$60.5 billion worth of US acquisitions.

While much of 2017’s record deal value was accounted for by British American Tobacco’s US$60.6 billion takeover of Reynolds American, the record volume of deals highlights that US assets have never been more attractive to UK firms.

The recent cut in the US corporate tax rate from 35% to 21% has brought levies into line with the UK and other OECD countries. This has made the world’s largest economy more attractive for inbound M&A, regardless of the jurisdiction of the targeting company. 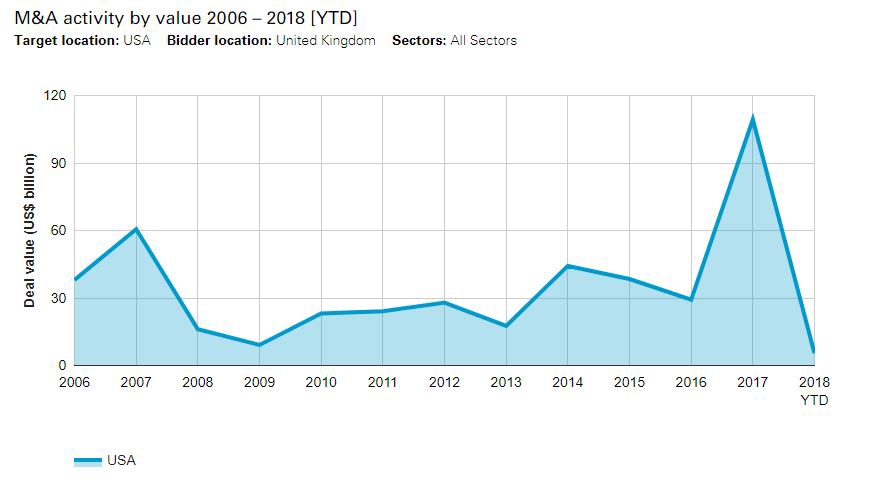 Given that the details of Brexit have yet to be sorted out, merger control could become more onerous once the UK strikes out on its own. This could encourage dealmakers to break into new markets such as the US over the coming years.

Anticipated trade barriers could make the transfer of goods and services within Europe more costly post-Brexit. For British companies that have historically relied heavily upon European customers, there is an impetus to diversify earnings; acquiring companies with proven track records is the fastest way to crack new markets.

Despite positive driving factors, the record activity seen in 2017 has failed to maintain momentum so far this year, with UK firms investing US$5.4 billion across 29 transactions in the first quarter.

One possible reason for this is that stock markets were hit by a brief volatile period in the opening months of the year. In the first week of February alone, the S&P 500 slipped by more than 6% and the FTSE 100 by nearly 5%.

While such turbulence may have put off dealmakers in the short term, long-term incentives for investing in US firms, such as the need to enter new markets and the increased tax efficiency of US targets, remain. US market stability was regained at the beginning of the second quarter, and this should see UK firms return to the fray throughout the remainder of 2018.