The impact of the new VBER and VABEO rules for franchises

The new UK and EU competition law regimes for all types of distribution agreements (including franchises) came into force on 1 June 2022. Franchisors have until 1 June 2023 to get up to speed with the new rules and update their agreements if they do not comply. This article takes a deep dive into what the new rules mean for franchise businesses in the UK and EU. An in-depth and more general summary of the new VBER is also available here.

Franchising is a unique distribution model. A franchise agreement will usually contain intellectual property rights (“IPR”) licensing relating to particular trademarks and/or know how. Franchisors also usually provide support in the form of commercial and technical assistance to their franchisees to maintain the integrity of the brand and franchise network. Franchisees typically pay a franchise fee to open stores and in return franchisors will include some vertical restraints to protect their investment.

Because of these characteristics, it is often argued that franchises should be treated differently to selective, exclusive or even open distribution systems. To this day however, the general competition rules have been applied and will continue to apply to franchise networks. Nonetheless, the new VABEO and VBER regimes do make some concessions, explored later in this article. Of course, it should be front of mind for franchisors running international franchises that the UK and the EU are now two separate regimes. Whilst on the whole they remain similar, some divergences are emerging and we expect such divergence to grow in the coming years, as the case law develops in the two jurisdictions. 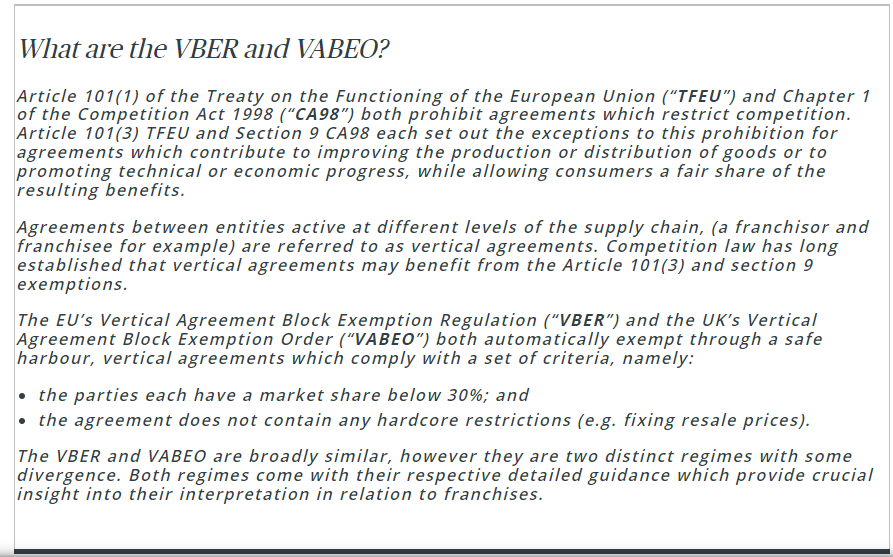 1. Similarities for franchises under the two regimes

b. Non-competes in franchises

The CMA and the EU Commission both recognise that in the context of a franchise, non-competes restrictions are necessary to maintain the common identity, reputation and structural integrity of the network. In contrast with the usual five-year maximum limit applicable to other types of distribution agreement, it is acceptable for non-competes to be for a term longer than five-years in a franchise agreement[2]. However, non-competes should never exceed the duration of the franchise agreement itself.

Post-term non-compete restrictions, which are common in franchise agreement must fulfil a set of criteria in order to be acceptable.

In both the UK and EU they must:

There is an additional fourth criterion, under the VABEO. The post term non-compete must:

In order to benefit from the safe harbour, franchise agreements should not include any restrictions considered to be ‘hardcore’. Those types of restriction have on the whole remained the same in the new regimes with the exception of two additions: the codification of the rule against restricting the effective use of the internet and, in the UK only, wide MFNs.

Imposing a fixed or minimum resale price on franchisees is a hardcore restriction referred to as Resale Price Maintenance (“RPM”). It is one of the most serious competition law infringements and is easy for competition authorities to establish. Franchisors can publish recommended retail prices or impose maximum resale prices, as long as in practice they do not amount to fixed prices.

Franchise agreements captured by Art 101 TFEU and/or Chapter CA98 which fall outside of the VBER and VABEO safe harbour will be subject to an individual assessment. Both sets of guidelines provide some reassurance however that the more important the transfer of know-how, the more likely it is that the vertical restraints will create efficiencies which are indispensable to protect this know-how, thereby meeting the exemption conditions of Art 101(3) TFEU and Section 9 CA 98[4]. This should provide a degree of reassurance to franchisors that franchise networks will be given a “leg up” when it comes to meeting the individual assessment, which is notably tricky to fall within and benefit from. It should not however be interpreted as a given that agreements will satisfy the exemption criteria, and franchisors should continue to give careful consideration to compliance with the VBER and VABEO.

2. Differences for franchises under the two regimes

a. VBER - Dual Distribution and renewed scrutiny around information exchange

Although the VBER is aimed primarily at vertical agreements, the safe harbour also extends to dual distribution scenarios, i.e: non-reciprocal agreements between competitors, where for instance the franchisor is a manufacturer and a distributor of goods, while the franchisee is a distributor and not a competing manufacturer. Dual distribution is very important to franchise systems as franchisors and franchisees can sometimes be both competitors and non-competitors, depending on the geographical location of the particular stores in scope and the geographical market.

It is good news for franchises that the new VBER has retained the dual distribution exception, even extending it to wholesalers and importers and also covering scenarios where the two parties compete on an upstream market level, and not necessarily on the downstream retail level.

Information exchange between franchisors and franchisees is often necessary to maintain the common identity of the brand. This is why the franchising community was particularly alarmed at the EU Commission’s initial proposals that to benefit from the exemption, the market share would need to fall below an aggregated market share threshold of 10% at retail level. This faced a deluge of criticisms on the basis that it was disproportionately low, impractical and unreasonable. Many predicted a Commission U-turn.

The new VBER regime does not contain the initially proposed market share threshold. Instead, the VBER makes it clear that where the exchange of information is unrelated to the implementation of the vertical agreement or is unnecessary to improve the production or distribution of the contract goods or services, it will not benefit from the dual distribution exception. This reflects the fact that the line between competitors and non-competitors is becoming increasingly blurred in multichannel distribution systems. The advent of online sales has only increased this phenomenon with many franchisors selling both through franchisees and directly on their websites in parallel.

Clearly, franchisors with dual distribution scenarios within their networks will have to be more cautious about the data they request from and/or exchange with their franchisees and make certain that they avoid using it or exposing it in relation to their direct sales. Helpfully, the VBER Guidelines provide guidance around the type of information exchange which is considered acceptable by the EU Commission and the type which is not. It also sets out that, within a franchise network, information exchange relating to the application of a uniform business model across the franchise network is likely to be considered necessary by the Commission.

b. VABEO - Less emphasis on information exchange (for now)

In addition, the VABEO Guidance (like the VBER) specifically recognises that information exchange relating to the application of a uniform business model will be required to implement the agreement in franchise networks[5].

Overall, the revised VABEO and VBER regimes are good news for franchises in the sense that both the Commission and CMA have understood how markets, customers and business has evolved since the last iteration of the regulations. The trickier part for businesses to deal with is the divergence between the EU and UK, which is only likely to increase over the coming years. Having one template agreement covering both the EU and UK may no longer be appropriate and franchisors will need to give even more thought around how they do business within the UK and Europe to stay compliant.