On 11 October 2019, the Ministry of Economy published in the Federal Official Gazette (FOG), the Draft amendments to Mexican Official Standard NOM-051-SCFI / SSA1-2010 - General labeling specifications for pre-packaged food and non-alcoholic beverages -Commercial and health information (PROY-NOM-051). The purpose of the amendments is to request the inclusion of information on the labels of pre-packaged food and non-alcoholic beverages that contain high calories, added sugars, saturated fats, sodium and other nutriments, to create awareness in the consumer before the purchase of such products.

Likewise, on 8 November 2019, a Decree that modifies different provisions of the General Health Law, regarding overweight, obesity and labeling of food and non-alcoholic beverages (the Decree) was published in the FOG.

Among the changes included in the Decree and in PROY-NOM-051, there is an obligation of including in a section additional to the declaration of ingredients and the nutritional information, a "front warning label" in products that contain high calories, added sugars, saturated fats, sodium and other nutrients, in a clear, truthful and simple way.

The front warning label must display stamps that indicate when a nutriment or ingredient appears in the product in excess. Because of this amendment, the reference to calories, sugars, fats and sodium currently expressed in balloon symbols with numbers will disappear to display the warning of certain excess content with simple images. Likewise, when a product includes sweetener or caffeine, it must be indicated in the stamps. Below please find a reference to the stamps: 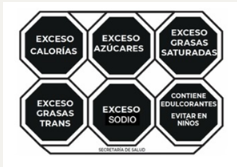 Additionally, if the product contains a stamp, it will be prohibited to include a legend indicating that the product is recommended by certain association or include images or drawings that promote the product's consumption.

New legends are incorporated such as "substitute product" that is used for pre-packaged products that replace or resemble other products (such as "almond milk") and reference to ingredients that cause hypersensitivity such as "contains gluten," "contains soy" and "contains caffeine; avoid in children."

We recommend that companies that import and sell pre-packaged food and non-alcoholic beverages in Mexico review their labeling and nutritional information, to be prepared for the implementation of such changes.

Companies that need to modify their labels in light of the amendments to NOM-051 and which have existing inventories of non-compliant labels, can request an authorization from the General Direction of Foreign Trade and the General Direction of Standards of the Ministry of Economy, to import and sell pre-packaged food and non-alcoholic beverages with the prior label. The application for authorization must be filed not later than 3 months before the entry into force of the amendments to NOM-051.