The Federal Court has found that the Australian Meat Group (AMG) has infringed the trade mark of one of Australia’s largest meat producers. The Court also narrowly applied the substantial identity test, bucking the trend of some recent decisions which indicated that the Court may be widening the scope of the assessment.

Long ago, the meat lobby figured out a perfect formula to sell consumers the otherwise unmarketable image of eating baby animals: Meat = Australia. Think of the annual Australia day lamb ad brought to you by the Meat and Livestock Association. The 2-minute epic is classically chockers with Aussie slang, blokes clad in thongs and boardies, a modern diversity spin and, of course, the closing shot of a mouth-watering lamb chop on the barbie. The inextricable link between a sizzling sausage and a sweaty Christmas day in the Southern Hemisphere can’t be denied.

At this point in time, vegetarian IP Whiteboard readers may wish to avert their eyes.

JBS is the largest meat processing company in Australia for exports. JBS had been manufacturing meat under the name ‘AMH’ (Australian Meat Holdings) for at least 16 years, until it changed its name in 2007 (first to ‘Swift’ then to ‘JBS’). In this time, slabs of rump and fillet were vacuum packed and branded with the all-Aussie AMH mark: 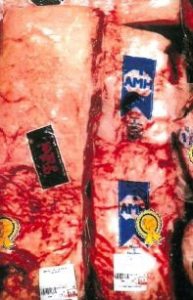 The AMH image mark was registered in 1989, displaying a truly novel “stylised map of Australia”, while the AMH word mark was registered in September 2015. Both of these marks were registered for meat products in class 29. Meanwhile, in April 2014 a competitor company, Australia Meat Group Pty Ltd, attempted to register the AMG trademark in connection with the same class 29 goods. A slightly more “free-flowing” map of Australia was featured, the H was ditched for a G and the capitalised words ‘Australian Meat Group’ were tacked onto the Great Australian Bight. 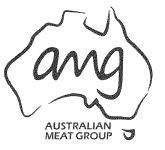 JBS opposed the registration of the AMG mark. As the registered owner of the AMH mark, it claimed its exclusive right to use the mark (Trade Mark Act 1995 (Cth) s20(1)).

In determining that the AMH mark had been infringed, the Federal Court considered whether AMG’s mark was “substantially identical with or deceptively similar to” the registered AMH mark.

In order to assess whether the marks were substantially identical, the Court looked at the marks in a “side-by-side comparison” and engaged in the usual game of spot the difference (and the similarities).

The court found that while the similarity of the “AM” was an essential feature of the registered mark, the dissimilarity of the “G” and the “H” were enough to adequately differentiate the marks. Judge Greenwood’s overall impression when comparing the two marks was that they were not substantially identical.

The Court then considered whether the AMG mark was deceptively similar to the AMH mark. That is, having regard to all the relevant circumstances, did the AMG mark so nearly resemble the AMH mark that it was “likely to deceive or cause confusion”. In comparing the similarity of the marks, the Court looked at the effect or impression that the AMG mark created on the mind of potential customers of JBS, taking into account the possibility of imperfect recollection (Crazy Ron’s v Mobileworld (2004) 61 IPR 212 at 228 [77]). On this ground, JBS succeeded. Greenwood J stated that the essential features of the both the marks were a stylised map of Australia with the letters AMG and AMH respectively in the centre of that map. Judge Greenwood also identified that there was the potential of confusion due in part to the industry practice of ordering meat products by reference to the acronyms (i.e. “AMH” and “AMG”). Stepping into the shoes of your friendly meat-seller-cum-phoneticist, Judge Greenwood remarked:

“In the hurly burly of oral trading transactions between retailers and wholesalers the emphasis is likely to be upon the “AM” component of the letter acronyms and that the last syllable is not sufficiently differentiating.”

Moreover, His Honour rejected AMG’s Maltesers case analogy that the reputation of the two trade marks is so pronounced that someone seeing the AMG mark would instantly identify that it wasn’t the AMH mark. Rather, His Honour found that the consumer would have an imperfect recollection of the two marks, making AMG’s conduct susceptible of deception and confusion, and creating a non-trivial likelihood that use of the AMG mark will result in people wondering whether AMG meat products are associated with AMH.

The AMG mark therefore adopted the essential features of the AMH mark. The addition of other words and titles on the packing boxes in conjunction with the AMG mark did not sufficiently distinguish the use of the mark. Accordingly, Greenwood J concluded that AMG mark was deceptively similar to the AMG mark and that use of the AMG mark infringed AMH’s registered trade mark rights.

The Court subsequently made declarations as to infringement; mandatory injunctions restraining AMG from using the AMG marks; an order that the domain name amg.com.au be transferred to AMH and an order that the AMG trade mark applications be withdrawn. The Court also ordered that AMG pay AMH’s costs of and incidental to the proceeding. The issue of damages or an account of profits was separated out for later determination.

Given the finding of deceptive similarity between the AMG and AMH marks, AMG will have to resort to new patriotic symbolism for its product packaging. Perhaps, in choosing a new icon for its trade mark, AMH can embrace the niche Australian position as one of few countries that eat its coat of arms.

IP Whiteboard wishes to acknowledge the kind assistance of Nicole Phillips in preparing this article.