WHAT IS FAMILY LAW ARBITRATION?

Arbitration is an out-of-court process that falls under the category of “Alternative/Appropriate Dispute Resolution”. It is the process that most closely resembles a Court hearing or trial, but it is private and confidential, and it is conducted in a manner that is best-suited for your family law dispute as determined with your trained arbitrator.

This means that parenting issues, including custody and access disputes, child support, spousal support and property division may all appropriately determined in arbitration.

HOW DOES FAMILY LAW ARBITRATION GET STARTED?

First and foremost, the parties to the arbitration need to consent to the process. The process must be fair and equitable, and the arbitrator is guided by the principle of “do no harm”. The parties must sign an arbitration agreement that outlines the following:

HOW DO I KNOW THE PROCESS WILL BE SAFE AND BALANCED?

Section 58 of the Arbitration Act sets out the requirement that both parties are to be screened for domestic violence and power imbalances prior to arbitration. This screening is mandatory and must be conducted by a lawyer, social worker, psychologist or other mental health professional, or a different arbitrator than the one conducting the arbitration (unless this is a mediation-arbitration in which case the mediator-arbitrator conducts the screening throughout the process as discussed below).

Screening is vital to ensure that both parties are fully consenting to the voluntary process of arbitration, and to determine if certain safeguards need to be in place to protect a vulnerable party. Sometimes the result will be that the parties will sit at a distance from each other, and not in the direct line of vision of each other, and sometimes the arbitrator will require that the parties to the arbitration not attend the hearing at the same time such that arrivals and exits are staggered at different times.

Screening is also conducted to ensure that the children are protected. If an incidence of violence or potential further harm to a child is discovered, arbitrators and other professionals are required to report it to the appropriate child protection agency. It is an offence not to do so.

WHY SHOULD I CHOOSE FAMILY LAW ARBITRATION?

Arbitration is the method of alternative dispute resolution that most closely resembles a trial, but it is generally less expensive, faster, private and more informal. Like a judge, the arbitrator is required to apply the relevant law to the evidence, and all issues may be resolved that arose from the separation or divorce of the parties (with the exception that the actual divorce judgment that grants the legal dissolution of the marriage has to be made by a judge).

For example, a judge has to determine custody and access issues in accordance with the child or children’s best interests and must consider the list of factors set out in section 24 of the Children’s Law Reform Act. An arbitrator will consider the same factors with the evidence that is provided in the arbitration. This will lead to a fair and equitable result.

The Ministry of the Attorney General requires that the lawyer who provides the party with independent legal advice must complete a certificate provided by the Ministry of the Attorney General and deliver it to his or her client, and attach it to the family law arbitration agreement. This is a mandatory requirement that, if not followed, will render the award unenforceable. This is consistent with the requirement that the parties to the arbitration proceeding are participating voluntarily, and are fully informed that they have left the Court process.

The arbitration award may be registered with the Court and enforced by the court, provided that it is in writing, and that it includes the place where, and the date when, the award was made. It must be formally signed by the arbitrator, and copies need to be delivered to each party.

The award may include costs and interest, provided that the arbitration agreement included those issues for determination.

Upon the request of a party, or both parties, within 30 days of delivery of the award, an arbitrator may explain, make corrections and/or make an amended award or additional award.

IS IT POSSIBLE TO FOR THE ARBITRATOR TO MAKE AN INTERIM/TEMPORARY AWARD?

Yes. The parties may agree for the arbitrator to conduct a hearing that is similar to a “motion” in court. Generally, sworn statements (“affidavits”) are used with oral argument for an arbitration award to be made prior to final determination. The award will be released in the same manner as a final award.

HOW DO THE PARTIES DETERMINE THE PROCESS FOR THEIR FAMILY LAW ARBITRATION?

The parties and their lawyers, or just the lawyers, may either meet or have a teleconference with the arbitrator to determine the process, and have the arbitrator make procedural rulings and create an orderly and predictable procedure. The parties will determine, through the arbitrator, what documentary evidence needs to be exchanged and provided to the arbitrator prior to the hearing. This step is often referred to as a “pre-arbitration conference”.

IS IT POSSIBLE TO APPEAL A FAMILY LAW ARBITRATION AWARD?

Yes. Section 45 of the Arbitration Act sets out that, even if the arbitration agreement does not set out the rights to appeal, a party may appeal an award on a question of law, with leave of the Court. In order to be granted leave, the Court must be convinced that the importance to the parties of the matters at stake justifies an appeal, and the determination of the question of law will significantly affect the rights of the parties.

Most arbitration agreements will include more expansive rights of appeal of an award. There will usually be choices of questions of law, questions of fact, and questions of mixed fact and law, with leave of the Court not being required. Questions of law are questions of what the correct legal test is and the standard of “correctness” applies.

Questions of fact are questions of what actually took place. The standard of review of an issue of fact is “a palpable and overriding error”.

Questions of mixed fact and law are questions about whether the facts satisfy the legal test. Findings of mixed fact and law lie along a spectrum such that if the error is attributed to the application of an incorrect legal principle, then the standard is correctness; however, if the legal principle cannot be separated from the facts, the appellate Court is subject to the test of “a palpable and overriding error” (unless it is clear that the arbitrator made an error in principle with respect to the characterization of the standard of law or its application, in which case the error would amount to an error of law).

It is also possible to seek to set aside a family law arbitration award under subsection 46(1) of the Arbitration Act, which lists the circumstances under which an award may be set aside by the Court.

WHAT IS SECONDARY ARBITRATION?

There is more leniency for secondary arbitration as it is assumed that the parties already had protections from the initial arbitration or other proceeding. Screening for domestic violence and power imbalances is done by the arbitrator, and the arbitration is to be conducted in accordance with the law of Ontario; however, it is not necessary for the parties to receive independent legal advice before participating in the secondary arbitration. There is also less formality in the requirements for delivery of the award.

WHAT IS FAMILY LAW MEDIATION-ARBITRATION?

Family law mediation is a voluntary process by which a neutral third party, called the “mediator”, facilitates a settlement of the issues arising from marriage breakdown. In the event that some or all issues are not resolved in mediation, and the parties have signed a “Mediation-Arbitration Agreement”, the matter would then proceed to arbitration for determination of the issues.

HOW IS ARBITRATION DIFFERENT FROM COURT? 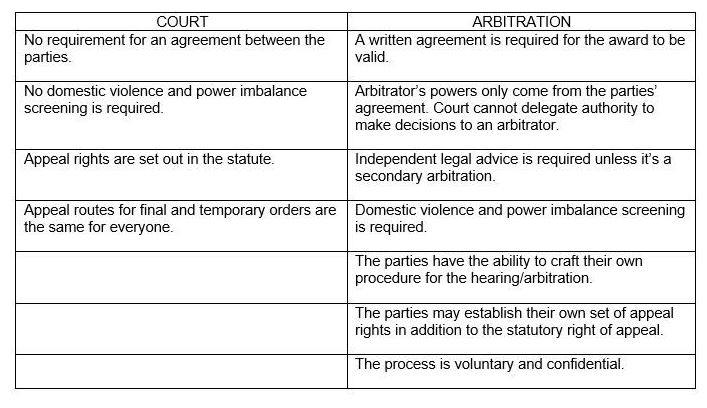 WHY DOES FAMILY LAW ARBITRATION COMPLY WITH NATURAL JUSTICE, EQUALITY AND FAIRNESS?

The Arbitration Act requires that the parties be treated equally and fairly. Each party is to be given an opportunity to present a case, and to respond to the other party’s case (or other parties’ cases if there are more than two parties).

The arbitrator is not to be biased, and the parties have a right to a fair hearing. They are to have knowledge of each other’s cases, with advance notice and the opportunity to present and respond.

Family law arbitration is a good option to have your case heard privately, through a procedure that suits your needs, with finality and closure by way of a binding decision based on the law as determined by a neutral, skilled adjudicator chosen by you and your spouse.