US dealmakers steer a steady path through global headwinds

As the rest of the world backed away from the deal table, confident US corporates continued buying businesses—especially in the life sciences and TMT sectors, and particularly in the domestic market.

US dealmakers had a strong 2019, with 5,757 deals targeting US companies, valued at a total of US$1.53 trillion. This represents a 10 percent decline in volume, but value is practically the same as the previous year's tally, making it the third highest total on record. Meanwhile, global M&A value fell by 8 percent.

In addition, this value figure gave the US a global market share of 47 percent—the second highest percentage on record. Buoyed by confidence in the domestic economy, deals continued to get over the line in the US, while numerous other regions took a slight pause for breath.

In late 2018, fears of a trade war and concerns that a downturn may emerge during 2019 led to volatile public markets. But the Dow Jones Industrial Average was up by 23 percent in 2019.

The US economy is forecast to grow by 2.3 percent over the whole of 2019, up from just over 1 percent in 2018, according to The Conference Board, with 2020 set for continued moderate growth. When combined with labor market statistics, which show the unemployment rate stabilized at approximately 3.5 percent, the outlook is bright. 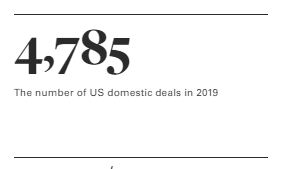 This positive sentiment is reflected in the pattern of M&A activity for the year. Confident corporates did big deals to extend their geographic and market reach: Megadeals (those valued at US$5 billion or more) increased by 23 percent, from US$723.9 billion in 2018 to US$888 billion in 2019. They accounted for 58 percent of the total deal value for 2019, a significant increase on the 47 percent seen in 2018. 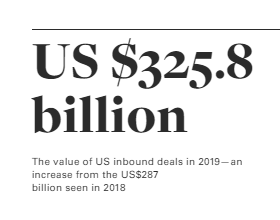 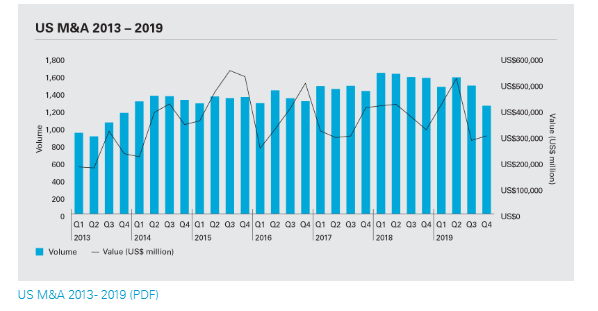 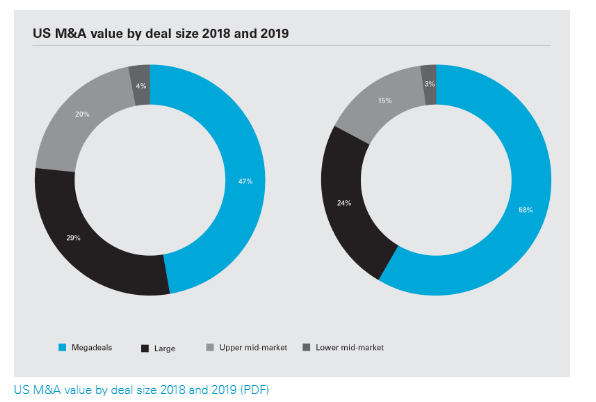 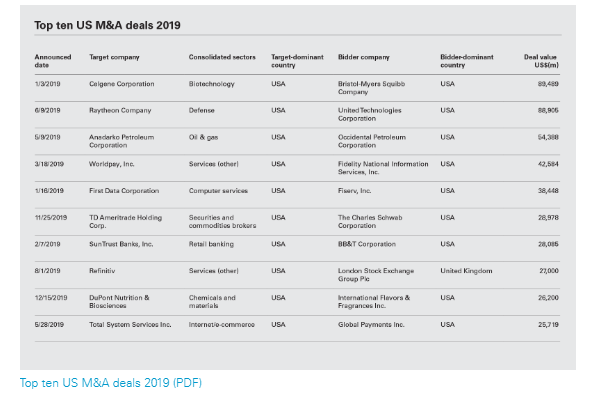 Activity involving large (US$1 billion to US$4.99 billion) and middle-market (US$5 million to US$999 million) deals was down by value and volume compared to 2018. High valuations may have played a role in this dynamic. The megadeals of 2019 often used stock consideration to mitigate the high cost of acquisitions. The largest deal of the year, Bristol-Myers Squibb's US$89.5 billion purchase of Celgene, is one example, as is the US$88.9 billion merger of United Technologies Corporation and Raytheon.

In the mid-market and below, buyers need to fund deals largely through cash and, despite continued liquidity in the debt markets and retained cash on balance sheets, buyers may be more circumspect when faced with high valuations. Companies that don't play in the megadeal space typically have fewer resources dedicated to M&A deals, and they may be more prone to caution in light of a possible downturn, particularly in a sellers' market dominated by auction activity. After several years of benign economic conditions, a survey carried out in the summer of 2019 by the National Association for Business Economics found that 72 percent of economists were predicting a downturn in 2020 or 2021.

With a strengthening of the Committee on Foreign Investment in the United States (CFIUS) regulations (see page 5) and ongoing uncertainty around the effect of US-China trade tariffs through 2019, it is perhaps unsurprising that domestic transactions dominated the megadeal space.

Nine of the top ten deals of 2019 were domestic, with only the UK-based London Stock Exchange's US$27 billion acquisition of financial markets data and infrastructure provider Refinitiv bucking the trend. However, the focus on large domestic deals also reflects greater appetite among US buyers for US assets, given the strength of the economy relative to some other markets (the European Union is forecast to grow by just 1.4 percent in 2019, for example).

While the focus at the top end was on domestic deals, figures across home-grown, inbound and outbound M&A mirrored the market's overall pattern. 2019 has seen 4,785 domestic deals worth US$1.2 trillion—a fall of 9 percent by volume and 4 percent by value year-on-year, which is similar to the overall market. The volume of inbound deals also fell by 13 percent to 972, while the value increased from US$286.5 billion in 2018 to US$325.8 billion in 2019, with outbound deal numbers dropping by 5 percent to 1,337 transactions and a consistent value of US$338.7 billion.

This is despite an increased focus on foreign acquirers by authorities in many markets, including the US, as well as greater coordination between countries on antitrust legislation (see page 7). For sellers, CFIUS has become a bigger issue when preparing for a deal and, while there may be additional scrutiny on the execution prowess of overseas buyers, the totals for inbound M&A suggest that increased scrutiny is not proving to be a deal-breaker. 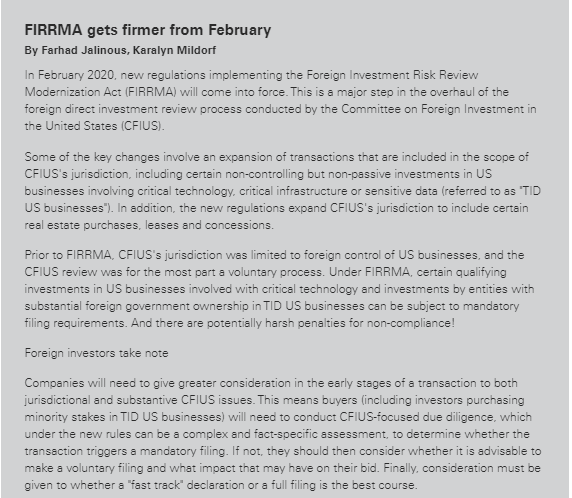 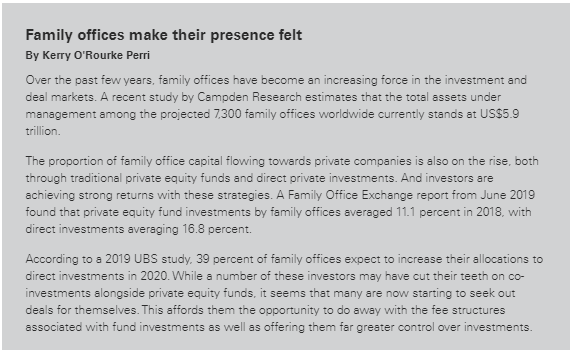 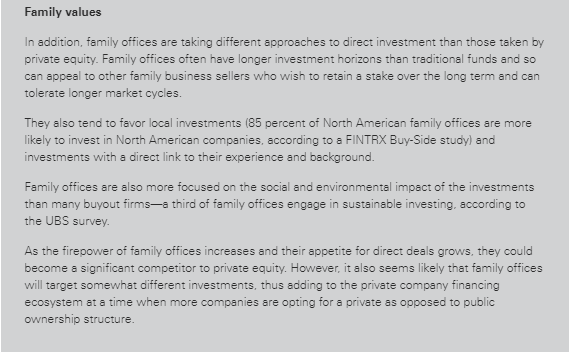 Canada was the most active acquirer of US businesses, accounting for 203 deals worth a total of US$55.1 billion, even as the US-Mexico-Canada Agreement (USMCA) trade agreement remained unratified at the end of 2019. The largest inbound deal with a Canadian bidder was Brookfield Asset Management's US$9.6 billion purchase of Oaktree Capital. The UK was in second place for value and volume, with 164 deals worth US$49.8 billion led by LSE's acquisition of Refinitiv for US$27 billion. China hasn't been a top ten bidder for inbound US deals since 2017, when it ranked sixth by volume and seventh by value. 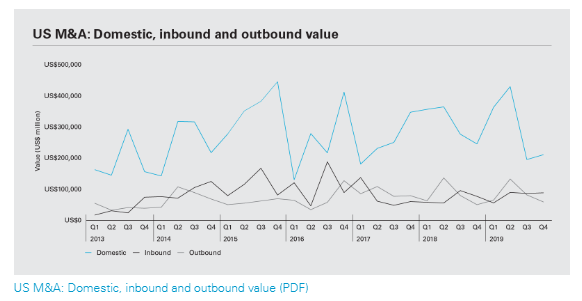 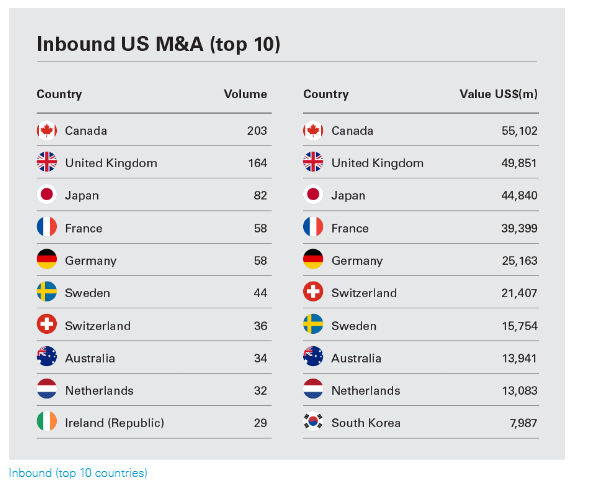 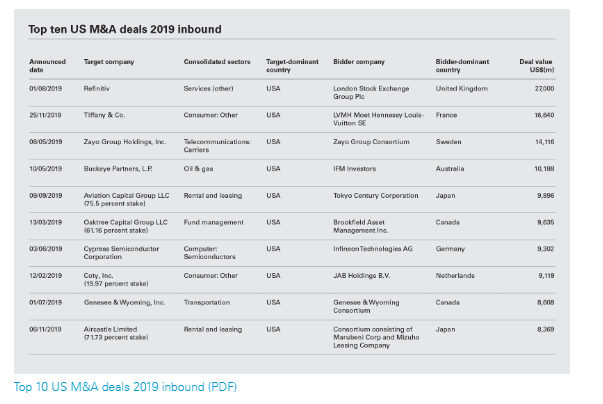 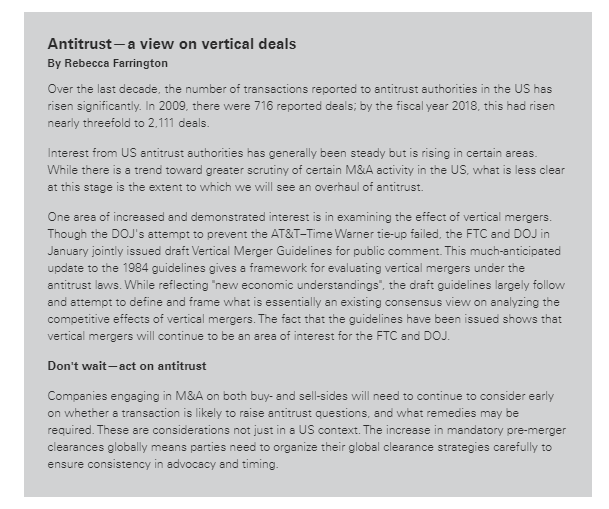 As we move into 2020, it seems likely that M&A activity will continue to be robust as long as the economy continues to grow and confidence remains high.

There are some concerns about an eventual downturn, but that inevitability provides opportunities for buyers that are experienced with distressed assets. The upcoming Presidential elections may also have an effect on M&A activity, particularly depending on which Democratic candidate wins the nomination. But we'd expect activity to be brisk in the early part of the year, as companies seek to complete deals well ahead of any potential change in administration.

How are countries regulating ICOs?