After much anticipation, the Home Secretary today announced the introduction of the new Points-Based System (PBS), timed to coincide with the UK’s full withdrawal from the EU by the end of the year. As made clear by the Government in the past months, the new system will treat EU and non-EU citizens equally and priority will be given to those ‘with the highest skills and the greatest talents’.

Our Head of Business Immigration, Sundeep Rathod, takes a closer look at the details of the policy statement.

Skilled Workers – with a job offer

In line with the Migration Advisory Committee’s (MAC) recommendation, the current Tier 2 framework will remain in place with several notable changes although the paper doesn’t specifically relate to any ‘tiers’. Individuals would still need to demonstrate that they have a job offer from an approved sponsor, that the job is at the appropriate skill level and can meet the English language requirement.

The current minimum salary threshold set at £30,000 is considered to be too high and this is set to be lowered to £25,600 for ‘experienced workers’. However, individuals will still need to meet the minimum salary for the particular SOC code, should this be higher than the general salary threshold. The new entrant rate will be set at 30% lower than the experienced worker rate.

The paper further confirms there will continue to be different arrangements for a small number of occupations where the salary threshold will be based on published pay scales although no further details have been provided at this stage.

Another recommendation of the MAC’s which the Government has adopted (and was also in the December 2018 white paper) will see the skill level reduced from RQF Level 6 (degree) to RQF Level 3 (A-level). Sponsors will be pleased to see that the annual cap (currently set at 20,700) will be ‘suspended’ and the dreaded, onerous Resident Labour Market Test removed.

One notable change of the new system will see individuals able to ‘trade’ characteristics such as their specific job offer and qualifications against a lower salary – a total of 70 points would be required for an individual to be eligible to apply (see table below). 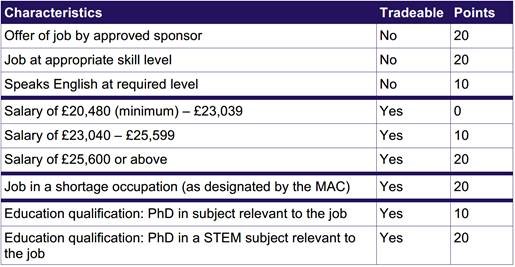 Based on the above, the absolute minimum salary an individual could earn would be £20,480. However, they would need to demonstrate they have a job offer in a shortage occupation role, or, they have a PhD in a STEM subject relevant to their job offer to be able to ‘trade’ the zero points for 20 and therefore meeting the 70 points requirement. If an individual is earning a minimum of £23,040, they could still meet the minimum points total if they can show they hold a PhD in a subject relevant to their job offer.

Return of the MAC – the policy statement confirms the Government’s intention to commission the MAC to review and produce a shortage occupation list for the skilled worker route which will be kept under regular review (seems like deja vu!).

Unfortunately, this is not the end of uncertainty for employers as the statement goes on to say ‘the Home Office will continue to refine the system in the light of experience and will consider adding further flexibility into the system including additional attributes that can be ‘traded’ against a lower salary…which might include a greater range of qualification levels or other factors such as ago or experience studying in the UK’.

The Government has already announced their plans to launch the Tier 1 (Global Talent) visa from 20 February 2020 and EU nationals will be able to apply under this category from January 2021. The Global Talent visa is a re-branding of the Exceptional Talent route and individuals who are endorsed by a relevant and competent body will be eligible to apply.

Additionally, in line with the MAC’s recommendations, the policy statement confirms the Government’s intention to create a ‘broader unsponsored route within the PBS to run alongside the employer-led system’. This potentially opens the door for an ‘Australian style PBS’ but unfortunately the Government will seek to introduce a ‘cap’ to this route – only allowing a ‘small number’ of individuals without a job offer. Clearly, the Government have taken into account the MAC’s warning of ‘avoiding past mistakes’ which is why the Government aims to explore proposals for this route with stakeholders in the coming year. The Government appears to be undecided on what this new route should consist of and time will be needed to introduce a route which works and therefore appears unlikely to be in force from January 2021.

When the current PBS system was introduced in 2008, the Government at the time decided to keep the Tier 3 (low skilled workers) route closed as it was believed that the flow of migration from within the EU would fill low skilled jobs. With free movement ending this year, the current Government’s stance is not to implement a new route for lower-skilled workers. The Government’s message to businesses is pretty firm; ‘UK businesses will need to adapt and adjust to the end of free movement…employers will need to move away from a reliance on the UK’s immigration system as an alternative to investment in staff retention, productivity, and wider investment in technology and automation’. The view taken is that the intended changes to the ‘skilled worker’ route will provide employers with greater scope to employ skilled migrants.

In short, businesses are being told that the there is already a pool of workers (including those who have applied through the EU Settlement Scheme) which is fit to meet current labour demands. In addition, the paper states that the pilot scheme for seasonal workers in agriculture will be expanded to include 10,000 places. Some commentators may argue that certain sectors such as hospitality, construction and care work may struggle to meet labour shortages in the absence of a low-skilled worker category.

EU nationals coming to the UK for visitor purposes will be treated in the same way as non-visa nationals – they will be able to arrive in the UK as a visitor for up to six months without needing a visa. EU nationals will continue to benefit using the e-Passport gates although this will be kept under close review.

EU nationals will make their visa application online and will enrol facial biometrics using smartphone self-enrolment with no requirement for fingerprints – this appears to be identical to the EU Settlement Scheme process. Non-EU nationals will continue to submit their visa applications and attend biometrics at a Visa Application Centre as they currently do.

‘Most’ EU citizens will be issued with an e-visa confirming their rights and entitlements to be in the UK. Employers will be able to verify an EU citizens right to work by following the online checking service.

The policy statement announced today appears to focus solely on economic migration and even then, we’ve only been provided with additional information on the skilled worker route as the Government needs time to see what the ‘broader unsponsored route within the PBS’ looks like. Secondly, certain sectors which rely on low-skilled workers earning below the minimum salary for the skilled worker route may be disappointed no provisions have been made for low-skilled workers at least introduce a temporary visa category. The paper goes on to state that ‘the Home Office will publish further detail on the points-based system in due course’ – the Government has less than ten months to publish ‘further details’, pass relevant legislation and implement within the Immigration Rules.

The only real clarity from today’s statement is the realisation that businesses who do not have a Sponsor Licence in place, will need to act quickly in applying for one if they envisage sponsoring EU workers from 2021. The paper states ‘Employers not currently approved by the Home Office to be a sponsor should consider doing so now if they think they will want to sponsor skilled migrants, including from the EU, from early 2021’.