‘A day is a day’: personal/carer's leave in the wake of Mondelez v AMWU

On 21 August 2019, the Full Court of the Federal Court of Australia handed down its decision in Mondelez v AMWU [2019] FCAFC 138. The case clarifies employees' entitlements to paid personal/carer's leave under section 96(1) of the Fair Work Act 2009 (Cth) (FW Act).

The decision may be appealed to the High Court of Australia, or the FW Act amended to reverse or mitigate the decision's effects. Until either of those things occurs, it reflects the current state of the law.

Mondelez Australia Pty Ltd (Mondelez) operates a Cadbury food manufacturing plant near Hobart. Employees at the plant, including a Ms Triffitt and a Mr McCormack (Employees), were covered by an enterprise agreement (Agreement).

The Employees were represented in the proceedings by their union, the AMWU.

Under the Agreement, the Employees were employed to work 36 hours per week, averaged over a four week cycle. They worked their ordinary hours in 12‑hour shifts on an average of three shifts per week.

On this approach, the Employees accrued enough leave over the course of a year to cover absences from work for eight 12-hour shifts.

What was in dispute?

The Employees claimed that section 96 of the FW Act entitled them to accrue ten 12-hour shifts of paid personal/carer’s leave per year of service, rather than the eight shifts contemplated by the Agreement.

What does the FW Act say?

Section 96 of the FW Act is part of the National Employment Standards set out in Part 2-2 of the FW Act. Relevantly, it provides that:

Mondelez argued that the word ‘day’ in s 96(1) does not refer to a calendar day but rather to a ‘notional day’, calculated by reference to the Employees’ average weekly ordinary hours divided by five.

So a hypothetical employee who worked 36 ordinary hours at an average of 7.2 hours per day over a five-day working week would have a ‘notional day’ of 7.2 hours. The employee would be entitled to ten such days (or 72 hours) of paid personal/carer’s leave for each year of service.

The Minister for Industrial Relations broadly supported, and supplemented in some respects, the submissions made by Mondelez.

The AMWU, on the other hand, argued that the word ‘day’ should be given its ordinary meaning of a ‘calendar day’. On this basis, it argued, s 96(1) allows employees to be absent from work without loss of pay on ten calendar days per year. On this construction, the Employees were entitled to 120 hours personal/carer’s leave each year, rather than the 96 hours provided by the Agreement.

What did the Court decide?

The majority of the Full Court (Justices Bromberg and Rangiah: Justice O’Callaghan dissenting) did not adopt either the ‘notional day’ or the ‘calendar day’ approaches contended by the parties. Rather, the majority endorsed the concept of a ‘working day’ consisting of the portion of a 24-hour period that would otherwise be allocated to work.

The Full Court further stated that (at para 150):

'[W]hether an employee works 7.2 hours every day over five days, or 12-hour shifts over three days, under the ‘working day’ construction, both will be paid at their base rate for the ordinary hours they would have worked if not for the illness or injury. Neither will lose that income. Further the leave balance for each will be debited with one ‘working day’ for each day of leave taken. The effect of this construction is that...no employee who is unable to work because of illness or injury will lose income.' [emphasis added]

Although not couched in terms of a ‘calendar day’, this interpretation had the effect advocated for by the Union.

In short, given the ordinary hours worked by the Employees, they were entitled to leave on the basis of ten 12-hour shifts per year (i.e. 120 hours). The Court emphasised, however, that the leave must be calculated in working days, rather than hours.

In summary, the majority determined that:

In a brief dissenting opinion, Justice O’Callaghan accepted the interpretation of s 96 contended by Mondelez and the Commonwealth.

Implications of the decision

Personal leave accrues according to an employee's length of service with an employer (at least one day of leave for each 5.2 weeks worked). For example:

Accordingly, part-time employees are entitled to ten days’ paid personal leave per year, regardless of the number of days actually worked.

Personal leave is deducted on the basis of ‘working days’. The value of payment for personal leave depends on when the leave is taken. Unless varied by a contract or industrial instrument, payment is limited to payment for ordinary hours. 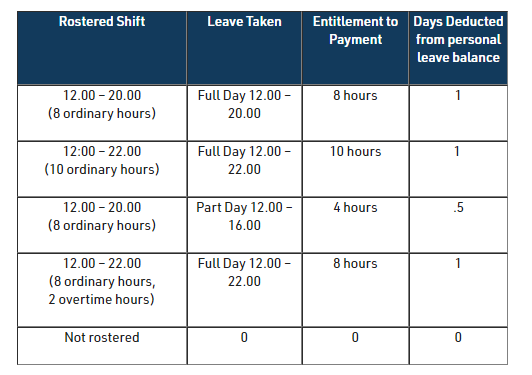 Overtime and ‘cashing out’ personal leave

The decision does not require employees to be paid in respect of rostered overtime on a day of personal leave (unless agreed).

It may be difficult to calculate the value of payments to employees entitled to ‘cash-out’ personal leave where they work different ordinary hours on different days. The Court did not rule on this point, but noted that a prudent calculation would assume the employee accesses the leave on days with the greatest number of ordinary hours.

To ascertain whether a reading of s 96 that is inconsistent with Mondelez has resulted in incorrect payments being made, it may be necessary to review past practice across a period of up to six years.

Importantly, the starting point is that, unless otherwise provided for in an employment contract or industrial instrument, only ‘ordinary hours’ need to be paid for each day of paid personal leave taken.