On 14 July 2017, the EU General Court issued a ruling in case T-223/16 between Massive Bionics SL and Apple Inc. and the EUIPO concerning the registration. In the end, the General Court also found that the Board of Appeal had rightly found that the marks are similar. The matter was based on the following trademark: 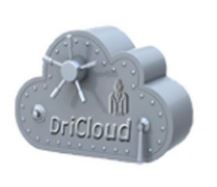 On 9 April 2013, Massive Bionics SL submitted an application for the registration of the trademark in classes 35, 42 and 44, against which registration Apple Inc. filed an opposition based on:

Massive Bionics SL claimed that the Board of Appeal had incorrectly found there was a likelihood of consumers being misled. The appellant argued that its business activities differ from those of the intervening party, Apple Inc. Further, it maintained that the disputed marks differ both graphically and phonetically, and it also claimed that, while the word “Cloud” appears in both Apple Inc.’s marks and the appellant’s mark, in the latter case “Cloud” is preceded by the prefix “Dri”, which makes it distinctive and original.

The General Court pointed out that the relevant consumer group, defined by the Board of Appeal as consumers within the European Union, and particularly in Cyprus, had not been challenged by the appellant.

Next, the General Court proceeded to an evaluation of the comparison of the goods and services the marks refer to that was performed by the Board of Appeal. The Board of Appeal took the view that certain services from class 42, and all services from class 35, were identical or similar to the services for which the earlier marks were registered. The appellant merely stated that the scope of its business activity is different than that of the intervening party – but provided no concrete evidence of this. It limited itself to the statement that the intervening party offers devices such as iPads, iPhones, iPods and Mac computers on the market, while the appellant provides services to hospital and clinics relating to the administration, electronic medical documentation, legal advice, and audits on compliance. It asserted, therefore, that the two entities provide completely different services aimed at different goals and directed towards different consumers.

The General Court did not agree with the appellant’s argumentation. It noted that Massive Bionics SL wanted to register its mark for an enormous number of services that extended beyond the categories listed above. Similarly, the marks belonging to Apple Inc. also extend beyond the scope specified by Massive Bionic SL. The General Court also noted that, when comparing the goods and services for a given mark, account must be taken of the class specified during the registration of the mark and not of the classes in which the mark is actually used. An exception is when a motion is filed concerning the presentation of evidence of the actual use of a mark for goods and services for which the mark was registered, as in the present case.

The General Court also found that the Board of Appeal had rightly found that the marks are similar. It pointed out that, in accordance with case law, a word element is more distinctive than a figurative mark because consumers more frequently refer to goods or services covered by a mark by name than by describing the figurative element. The General Court agreed with the Board of Appeal that, when perceiving a word mark, a consumer divides it into elements that have some meaning for the consumer. In the case of the mark “DriCloud”, some consumers could divide it into two elements: “Dr” and “iCloud”. Therefore, the marks in this case share a common element, “iCloud”.

In the view of the General Court, the Board of Appeal rightly found that there is a low degree of visual similarity between the marks. Phonetically, the word element “iCloud” is pronounced identically in both cases, and so one can speak of a medium or high degree of similarity, depending on how the element “Dr” is pronounced by a consumer. In respect of conceptual similarity, the General Court also shared the view of the Board of Appeal that the letter “i” is often used as an abbreviation of the word “internet”, while an English-speaking consumer might associate the word “cloud” with “cloud computing services”.

Therefore, the General Court found that the marks are similar in this respect, though it did note that a person who is not familiar with English would not associate the word “cloud” as presented, in which case a conceptual comparison would be unimportant.

Taking the above into account, the General Court ruled that the Board of Appeal had correctly deemed the marks as generally similar. The complaint, therefore – or in essence, the motion for partial invalidation of the contested decision – was dismissed.