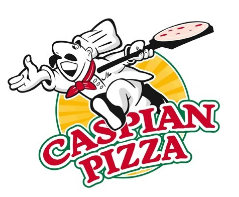 The owners (and their licensees) of a chain of pizzerias in Greater Birmingham, founded in 1991 and featuring the distinctive logo above, sued the operators of restaurants also using the CASPIAN name in the Worcester area for registered trade mark infringement.

The claimants owned registered trade marks for CASPIAN and the above-mentioned logo mark, with respective filing dates of 8 July 2005 and 21st September 2010.

However, the defendants had been running their CASPIAN restaurants since 2002.

The claimants filed an action for registered trade mark infringement and passing off. The defendants counter-claimed that the two registered marks should be declared invalid.

HH Hacon J in IPEC dismissed the action for registered trade mark infringement and declared the registered word mark invalid. The alleged franchise agreement was rejected. On the other hand, CASPIAN was not deemed similar enough to the logo mark (which had not been used by the Worcester-based operators) and therefore this trade mark was not declared invalid.

The claimants appealed. The defendants also counter-appealed for a declaration of invalidity of the logo mark.

The defence against the claim for registered trade mark infringement relied on s.11(3) of the Trade Marks Act 1994 which protects the holders of an earlier right in a particular locality.

The counter-claim of invalidity was based on s.5(4)(a) of the same Act, under which a trade mark cannot be registered when it conflicts with prior rights such as those that would be protected under passing off.

The defendants stated that they had actually acquired goodwill in the Worcester area due to having operated the restaurant since 2002, giving them rights under both subsections.

The Court considered whether the geographical extent of the rights under s.11(3) is also sufficient to fulfil the requirements of s.5(4)(a), or whether the latter required more extensive prior use of an unregistered mark.

The Court of Appeal essentially agreed with the view of HH Hacon J, both referring to a case in the then Patents County Court, Redd Solicitors LLP v Red Legal Ltd and the earlier decision of a hearing officer in SWORDERS Trade Mark.

In particular, it was stated there that an application to register a national trade mark was comparable to an expansion of the applicant’s business into the defendant’s specific locality, thus justifying the latter’s right to prevent the registration of that application.

The Court of Appeal also underlined that s.5(4) provided for the possibility of a “geographical carve out” in the course of the registration of a trade mark to take into account prior unregistered rights.

Thus, the only requirement for the defendant was to have built up enough goodwill over a clear geographical area which is sufficient for passing off proceedings.

On the other hand, it was stated a Court could only decide whether part of the specification of a trade mark can be declared invalid. It does not have such powers over the geographical reach of a mark and cannot exclude an area from the coverage of a registered trade mark. Accordingly, the Court of Appeal was compelled to declare the whole mark invalid.

This case strengthens the rights of local business owners against those who subsequently register trade marks in the hope that they will have automatic monopoly rights regardless of the previous activities of other parties.

Had a proper franchise agreement been set up in the first place, such a dispute would not have arisen. This case confirms that formalising the treatment of IP rights in business relations is vital.