The rise and rise of ‘social commerce’

What is social commerce?

Social commerce is the purchasing of products and services online through social media platforms such as Facebook, WeChat, Zalo, and Line. While some super apps integrate payment and logistics into a single app, others serve as a platform for connecting users and their wares to buyers with third-party services handling the payment and logistics. Other “s-commerce” platforms have sprung up, focusing on combining social media networks with e-commerce functionality, where Key Opinion Leaders and Influencers can promote products. One example is China’s Little Red Book (“RED”).

According to a 2019 report (The State Of Social Commerce In Southeast Asia) conducted by Econsultancy, Magento and Hootsuite, respondents reported that social media is highly influential in their buying decisions. 44% of social shoppers said that they had made three or more online purchases in the past month due to seeing social media posts or ads.

Social media and the growth of e-commerce

A 2020 study by PWC found that there has been increasingly higher usage of social media platforms among consumers looking to make purchases. However, due to the pandemic and social isolation, the adoption of social media for communication and shopping has accelerated further. 58% of consumers saw increased social media consumption, with 86% of those likely to maintain increased use even after isolation measures have ended.

The opportunity for social media as a sales channel cannot be ignored. In Indonesia alone, Paypal reported that 80% of Indonesian online merchants sell through social e-commerce. McKinsey, in their report, mentioned that the social commerce market is to be at least $3 billion, with users buying from BlackBerry Messenger, Facebook, Instagram, Line, and WhatsApp.

According to Hootsuite, the world’s top 3 most used social platforms Facebook, YouTube, and WhatsApp, have a collective of 7 billion active users. The potential reach for bad actors on social media alone is massive. Like traditional marketing, counterfeiters funnel sales by creating accounts across multiple platforms and attempting to direct consumers to external sites. It is common to see such accounts linking a social media reference landing page which links off to other ecommerce or third-party payment sites.

Socal commerce takes advantage of consumer distrust in traditional e-commerce advertising. According to Nielsen’s Global Trust in Advertising report, 92 percent of consumers worldwide say they trust earned media, such as recommendations from friends and family, above all other forms of advertising. This is not surprising since advertising on social media is not tarred by the brush of traditional advertising. Counterfeiters boost their credentials by soliciting paid positive reviews through bots and even boosting sales volume through fake purchases.

Monitoring illicit activities is a big challenge. Most social media platforms in Southeast Asia do not require identity verifications and counterfeiters hide behind a cloak of anonymity to create fake accounts. Facebook Inc, in a recent disclosure to the U.S. House Committee on Energy and Commerce, said it took down 1.3 billion fake accounts over a three month period.

Counterfeit sellers can also create a private network of sales and distribution through closed groups such as those on Facebook. Groups give criminal networks some form of control as they can set it up so that new members are required to answer a series of questions before being accepted. Administrators also can change the group’s visibility to “hidden” which completely hides a group from searches by the general public, recruiting members through targeted messages. On a global level, developments in data protection regulation and privacy law have made it more difficult for law enforcement and investigators to collect data on online users.

On the other hand, China does require Real Name Identification – although individual identies behind accounts are not made public and the usage of other’s identities is common to get around blocks and bans.

Which social commerce platform should you focus on?

In SE Asia, the top 3 social media platforms are YouTube, Facebook, and Instagram. This is according to Hootsuite’s report. It is important to note that there is localized preference such as Line with a whopping 86% usage in Thailand and Zalo with a respectable 77% usage in Vietnam. 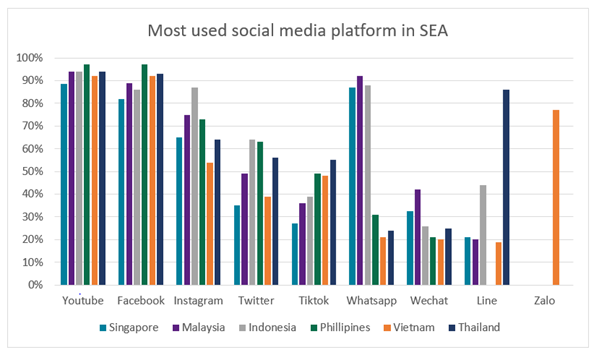 Although these platforms started as communications or media sharing platforms, most have evolved towards super apps where users can also buy, sell and transact within one app. Tik Tok recently launched its marketplace in Indonesia. Facebook, Instagram, Zalo, and Line have also integrated in-app shopping and transactions. YouTube plans to eventually incorporate e-commerce elements, as global platforms look to copy China’s success in the video marketing and livestream selling space, with leaders including KuaiShou, Taobao Live, Douyin and others.

The Rising Trend of Social Commerce – and China is Leading It

There is no doubt that China is the world’s largest e-commerce market, where consumer-oriented innovations are leading in the social commerce field. It is reported that social commerce sales in China totalled approximately $186.04 billion in 2019 — nearly ten times the number of sales in the US, which reached $19.42 billion.

People, especially younger generations, are spending more and more time on social media apps, which has positioned social commerce as the market breakout trend for e-commerce in the future.

Take Pinduoduo as an example. This platform reached $251.76 billion in e-commerce revenues in 2020. Pinduoduo’s meteoric growth was fueled by WeChat, the most popular social media platform in China. The users of Pinduoduo round up additional buyers via WeChat to reach discounts on products under the group-buying model.

A more accessible model for both sellers and buyers

The customer experience is made easier by social media shops compared to traditional e-commerce. People can review, click and order while spending time on social media apps.

For sellers, the mode of traditional e-commerce would have them open a store on Taobao but without investing much promotion of the business, resulting in a lack of consumer awareness of new estores. Taobao and Tmall have developed an “express service” by which online sellers could achieve more exposure to attract more traffic. This, however, would require the payment of high e-commerce traffic costs, leading many beginner merchants or counterfeiters to consider social commerce as a more cost-efficient option.

Multifunction of the social media giants – not just “Social Media”

A crucial factor for the staggering success of Chinese social media platforms in e-commerce is that they are more multifunctional and have a broader purpose for their users.

Take WeChat as an example. The most popular social media app in China has developed a lot of new functions in the past ten years, including but not limited to “WeChat Pay”, “Mini-programs”, “Moments Ads” and “Short video account”. The mini-programs can function as standalone e-commerce stores which don’t require an install to use. Moments and Short videos are used to promote products to WeChat “friends” and the public that follow these accounts. Payments can be made seamlessly through the WeChat Payment function – and Chinese consumers trust and use WeChat pay for payments on a daily basis, meaning that there are no barriers from payment trust issues like can occur with giving your bank card details to third parties.

Under this ever-evolving WeChat’s ecosystem, the whole social commerce journey is much easier for customers to make orders and interact directly with brands.

There is no doubt that WeChat is the super app in China, which reached 1.2 billion monthly active users in 2020, according to the 2020 Statista.com & WeChat Annual Report.

XiaoHongShu is a social media platform launched in 2013, which started as a lifestyle platform. Arriving in 2014, Xiaohongshu was added with an e-commerce functionality, making it one of the first and most popular social commerce platforms in China. Since then, many popular overseas brands and influencers have joined the platform to sell their products in the Chinese market.

Xiaohongshu has 300 million registered users. In 2020, this popular Chinese social commerce platform had a total of approximately 100 million active users.

What should brand owners do?

China was and continues to be a leading manufacturer and supplier to overseas markets, including SEA. When it comes to the e-commerce market, Chinese platforms (B2C or B2B) are crucial elements in the SEA distribution chain, and social eCommerce only fortifies China's stance.

An enforcement strategy for SE Asia that does not include or consider China would result in handling the effects of a problem without addressing the cause.

Having an official verified account on the platform lets you fill any void left by successfully enforcing counterfeit sellers immediately. It could also open doors for more brand protection co-operation activities between brand owners and the platform.

Mapping and monitoring a platform allowing you to track and focus your resources on critical infringers while keeping a tab on the general health of the platform. The simplest way to do this is by periodically searching sets of popular keywords and capturing the data manually. Ideally, you would want to capture information relating to the stores such as reviews, sales volumes, discounts rate and related networks. To scale up the process, you could use scrapping tools that crawl the web automatically for data. It is important to note that data scraping can be a grey area, depending on its usage. However convenient, data scrapers have limitations. Many platforms now have anti-scraping mechanisms - social apps such as Facebook and Instagram prohibit data mining activities and have anti-bot systems in place. Alibaba is continuously updating its defenses as hundreds of thousands of bots are crawling it every day to obtain valuable data which can be used for marketing insights or infringement detection. It is also relatively complex to monitor media streaming platforms such as live auctions on Facebook or a video stream on Tik Tok. By the time rightsholders become aware of such livestream flash sales on such platforms, the damage can already have been done – and evidence that it occurred for the purposes of enforcement challenging to obtain.

With a monitoring system in place, you can then consider enforcement. Most platforms have processes in place for the brand owner to report and enforce on IP infringements.

Facebook, Instagram, and Twitter have publicly accessible channels where rights holders can report infringing content. WeChat, Line, and Zalo allow users to report infringements through the app. WeChat also has a dedicated Brand Protection Platform where brand owners can register and file complaints (and receive “clues” from users who report others), while Line users are able to report through an online form.

For platforms without a robust seller verification process in place, infringers would repeatedly create new accounts following any enforcement action. One of the biggest challenges of online enforcement is ensuring that infringers hiding behind the veil of anonymity are taken down permanently. One way to do this is to convert key online targets into offline targets for further investigations and take legal actions. Looking beyond just investigations and enforcement, brand owners should also try to engage social media platforms and build up proactive brand protection measures and take joint enforcement actions against counterfeiters. The Facebook and Gucci lawsuit has recently shown us that social media platforms and brand owners can take coordinated actions against counterfeiters.

Social media has evolved from being a simple media sharing and communications platform to becoming super apps rivaling and overtaking e-commerce sites in some instances. In China, a new draft regulation argues that such social media platforms with e-commerce functions should be held to the same regulations as e-commerce platforms since they provide merchants with order generations and transactional services. In reality, social media platforms functioning as e-commerce often face less scrutiny than traditional e-commerce platforms. Therefore, it is crucial for brand owners to take precautionary and preventive actions.