Blockchain technology adoption has increased rapidly in recent years. The proliferation of tools for big data analysis and artificial intelligence based processing pushes organizations to collect and make available large amounts of data. Blockchain provides a secure, distributed, and efficient way for organizations to track, trade, organize, and store data. As such, implementations of blockchain can be found in almost every major industry. The adoption of blockchain technology for a variety of data organization and tracking applications suggests a paradigm shift in the way that organizations will track, and share data moving forward.

There has been a large increase in patent filings on blockchain innovations in the past few years. (1) In 2014, patent filings on blockchain innovations took off and have doubled, tripled, and in some sectors even quadrupled since then. A second sharp spike was experienced in 2017 as implementations of smart contracts and corresponding patent applications began to appear. During the time period between 2010 and 2019, the percentage of overall filings represented by the United States dropped a few percentage points but remains around or just below 80%. The biggest gains in the percentage of overall blockchain patent filings over the last decade are represented by Japan and South Korea. These gains may correspond to the export of American cryptocurrency and fintech applications into Asian markets as well as the continued expansion of Asian markets into fintech ventures. 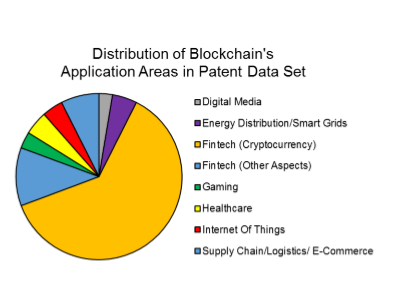 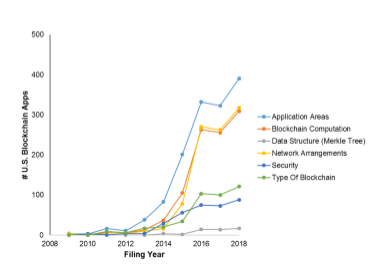 Blockchain innovations are generally implemented in software and therefore tend to be assigned to art units within the business methods groups of technology center 3600. Many of the blockchain patent filings related to application areas, network structure, and blockchain computation are assigned to art units 3685 and 3697, which both have very low average grant rates of about 20% and 6% respectively. Higher allowance rates may be found within Tech Center 2100 relating to computer hardware and software.

Applicants are strongly encouraged to claim a clear practical application of blockchain technology as implemented on specific hardware or network structure if possible, in order to increase the likelihood that the patent filing will be examined in a 2100 art unit rather than 3600, as well as to mitigate issues arising under 24 U.S.C. 101.

What does this data teach in-house and firm practitioners?

• The expanding implementation of blockchain technology across many industries means that even practitioners outside of computer and electrical engineering fields may be presented with blockchain related disclosures. Even practitioners who do not handle fintech sector patent filings should familiarize themselves with the nature of block basics of blockchain technology in order to help clients identify and capture related innovations.

• Practitioners representing clients in internet of things, energy distribution, supply chain logistics, and healthcare fields should be probing to determine whether any innovations are supported by blockchain technology. • Anticipate that the number of filings from Asian markets will continue to increase. Practitioners supporting Japanese, South Korean, and Chinese high-tech clients should be aware of blockchain basics.

• The continued growth in patent filings on blockchain technology indicates strong economic interest in the adoption of the technology. Blockchain technology may be a strong space for investment. However, there is risk associated with the potential difficulty of successfully obtaining patent coverage on blockchain innovations depending what art unit at the patent office examines the case. The acquisition of blockchain patents may impact he success of ventures that rely on blockchain backed services.