Shareholder Activism: Will 2018 Be a Record-breaking Year for Activism?

Driven by the momentum of a robust year in 2017, shareholder activism reached record highs in the first half of 2018.

Globally, 610 companies were subject to public activist demands, representing a 9% increase against the same measure for the first half of 2017.

Geographically, the United States continues to be the focal point of activist activity. However, the number of activist initiatives outside of the United States, particularly in Europe, has been on the rise with activists increasingly willing to navigate through various corporate rules and customs of other countries in search of opportunities in less-crowded markets. The first quarter of 2018 saw $7.2 billion of capital deployed in new campaigns against European companies, including $5.4 billion from U.S. activists, representing the largest aggregate investment by U.S. activists in European companies in a single quarter. The European Union’s recent directives aimed at bolstering shareholder participation may encourage further activism in Europe. In addition, activism is gaining traction in Asia, a region previously considered to be impervious to activist demands. As activists advocate for improvements in capital efficiency and corporate governance in particular, a growing number of Asian companies are seeking advice on how to efficiently respond to such demands. 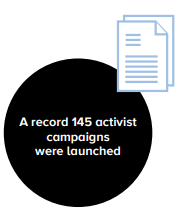 Activists are increasingly turning their attention toward influencing business strategy. Campaigns aimed at seeking change in companies’ operational and managerial plans accounted for 25% of all campaigns in the first half of 2018, compared to 11% in 2017. Additionally, activists continue to call for greater transparency and action on environmental, social and governance matters, aspects of which include board diversity, gender pay gap and climate change. In response, boards are increasingly focused on taking a critical eye to their respective business practices and governance policies and actively engaging with shareholders.

As in 2017, the top demand sought by activists in the first half of 2018 was board representation. With 119 board seats obtained as of June 30, 2018, activists have won more board seats in the first half of 2018 than they did in all of 2017 (100 board seats). Almost 85% of the 119 seats were won by settlement, which reflects companies’ continuing reluctance to engage in proxy fights. Notably, “long-slate” nominations, in which activists seek to replace at least 50% of the board, accounted for one-third of all board nomination campaigns in the first half of 2018, the highest level since 2014. Meanwhile, M&A-related campaigns, including pushing for sales processes, intervening in announced transactions or initiating break-ups and divestitures, remain on the rise, continuing a trend from last year.

The cost of building a significant position from which to influence management and board decisions is lower in smaller-cap companies. Therefore, smaller targets continue to attract activist attention. For example, 31% of all activist demands in the first half of 2018 targeted companies with a market cap below $250 million and 55% targeted companies with a market cap below $2 billion. However, activists are increasingly leveraging their reputations, track records and relationships with institutional shareholders to pursue larger targets: companies with a market cap above $10 billion accounted for 27% of all targets in the first half of 2018, compared to 21% in 2017. This trend illustrates that larger-cap companies are now firmly within the activists’ crosshairs.

With shareholder activists further solidifying and expanding their influence in the market in the first half of 2018, boards of public companies should expect a continued high level of attention from activists. Ongoing engagement with shareholders and anticipating and understanding potential areas that are susceptible to scrutiny by activists are important strategies that every public company board should be considering.

Recent trends highlight the fact that no company, regardless of jurisdiction or size, appears to be beyond the scope of activist attention.