The government has unveiled details of its new post-Brexit immigration system which will apply from 1 January 2021. In a significant change, EU nationals moving to the UK to take up work will require work visas and employers will need a sponsor licence to sponsor both EU as well as non-EU employees.

The new employer-sponsored route for skilled workers will be similar to the existing Tier 2 regime and will be points based. In a move likely to be welcomed by employers, the resident labour market test (RLMT) will be removed and the general minimum salary threshold will be reduced from £30,000 to £25,600 (or the specified going rate for the job type, if higher). The annual cap on numbers will also be removed and the minimum skill level will be reduced from RQF 6 (broadly bachelor's degree level) to RQF 3 (broadly A level) to include a wider pool of jobs than the current regime.

Under the new system, applicants will need a minimum score of 70 points from a set of 'characteristics' to qualify. Holding a job offer from an approved employer, meeting the minimum skill level and being able to speak English to a certain level will provide the initial 50 points. Applicants will then score the remaining 20 points based on a tradeable set of characteristics - the salary level for the role, whether the role is a recognised shortage role (with skills deemed to be in short supply in the UK labour market), whether they hold a relevant PhD or a relevant STEM PhD qualification. 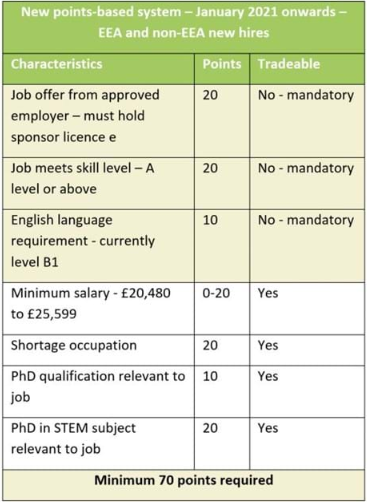 The government has said it also wants to introduce a new route to allow a capped number of highly skilled workers to come to the UK without a job offer. The new route which will not be available initially and may not be introduced until 2022, would allow individuals to rely on their qualifications, age and work experience to score sufficient points to qualify for a highly skilled visa.

2. What should employers do to prepare?

With less than 10 months to go, we are working with clients to help them prepare including assisting with the following projects: