Since the Child Nicotine Poison Prevention Act (CNPPA) became law in 2015, liquid nicotine in containers “from which nicotine is accessible through normal and foreseeable use by a consumer” (such as e-liquid bottles) have been required to utilize child-resistant packaging pursuant to the Poison Packaging Prevention Act (PPPA) and its implementing regulations. The Consumer Product Safety Commission’s (CPSC) guidance on these requirements for liquid nicotine containers has evolved – and become more stringent – over time.

By way of background, following its initial July 2016 Liquid Nicotine Packaging Surveillance Revised Guidance, in August of 2018 the Agency published a Nicotine Packaging Advisory Letter informing the industry that secondary dispensing caps or applicators sold along with a liquid nicotine product and that are “reasonably expected to replace the original closure” must also meet the child-resistant packaging requirements (see our previous discussion here). Now CPSC has indicated that in addition to child-resistant closures, liquid nicotine containers must also incorporate flow restrictors to limit the flow of e-liquid once opened.

A February 20, 2019 Tweet by CPSC Commission Peter Feldman was the first indication that CPSC is interpreting the CNPPA to require “flow restrictors” on liquid nicotine containers: 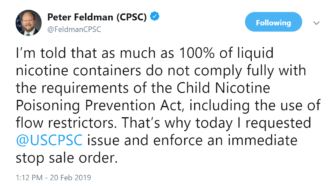 That same day, the Director of CSPC’s Office of Compliance and Field Operations published a letter informing the industry that the Agency would soon be issuing guidance on testing parameters for meeting the restricted flow requirement.

Subsequently, on March 8, 2019, CPSC issued a follow-up letter, “Nicotine Packaging Test Parameters”, confirming that CPSC now interprets the CNPPA to require flow-restrictors on nicotine e-liquid bottles, and attaching a copy of the test-method CPSC will follow to determine compliance with flow restrictor requirements – the draft ASTM F02 Committee’s Standard Test Method for Assessing Non-Metered Restricted Delivery Systems for Liquid Consumer Products. This test method requires the use of specialized equipment, which would likely be available only through third-party testing labs. 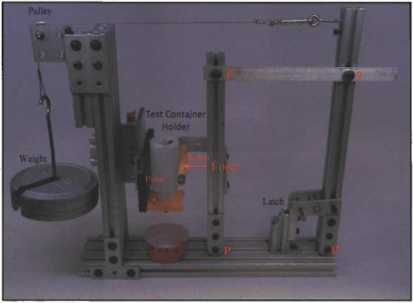 What are Flow Restrictors?

Under CPSC’s PPPA regulations, some products and substances are required to be in packaging that includes flow restrictors as part of its child-protective design. Flow restrictors must be designed so that the flow of liquid from the container “is so restricted that no more than 2 milliliters of the contents can be obtained when the inverted, opened container is taken or squeezed once or when the container is otherwise activated once.” 16 CFR §1700.15(d). The regulations do not require a specific design, nor do they provide a test method to establish compliance with restricted flow requirements (they do, however, provide extensive testing protocols for child-resistant closures).

Commissioner Feldman was a key drafter of the CNPPA in his previous position as Senior Counsel to the United States Senate Committee on Commerce, Science, and Transportation. He remains committed to strong enforcement of the CNPPA in his current role. On March 13, 2019, Commissioner Feldman, together with his fellow Republican Commissioner Dana Baiocco introduced an amendment to the CPSC’s proposed budget request to specifically allocate funds to “support identification and removal of hazardous products that do not comply with the special packaging requirements” of CPSC’s regulations. The Commission unanimously approved this amendment.

On April 9, 2019, the House Committee on Energy & Commerce’s Consumer Protection and Commerce Subcommittee held an oversight hearing on the CPSC. During the hearing, the Committee’s Chair, Congressman Pallone, displayed a liquid nicotine container, purchased online, without a flow restrictor. He stated that “if you open it, you can see that it can simply be dumped out in an amount that can easily kill a child.” He then asked CPSC Acting Chair Ann Marie Buerkle what CPSC is doing with respect to enforcing the CNPPA in general, and the flow restrictor requirement specifically. Buerkle stated that CPSC shares the concern and that an enforcement plan has been developed that will include inspections of brick and mortar retailers as well as online surveillance.

Increased CNPPA enforcement has already begun and is expected to increase. Companies with products that do not have both child-resistant closures and flow restrictors may be required to cease sales and initiate product recalls, until their packaging is brought into full compliance. We also expect increased focus on accompanying General Certificates of Conformity (GCCs), which companies will need to update to certify both the flow restrictor provisions of the regulations as well as the child-resistant closure requirements.

Companies seeking to modify their existing product packaging should be aware that FDA has previously indicated that changes to a tobacco product’s “packaging configuration” could trigger FDA’s premarket review requirement for new products. Only e-liquids and vapor products that were on the market on August 8, 2016, the effective date of FDA’s “Deeming Rule,” and that have not been modified since, are allowed to be marketed today subject to the Agency’s compliance policy. Changes to e-liquid bottle size and material, for example, could create a new product that requires Premarket Tobacco Product Application (PMTA) authorization. That being said, given FDA’s own stated concerns about children accidentally being exposed to or ingesting nicotine-containing e-liquids, it appears unlikely the Agency would discourage CPSC from enforcing its own laws and requiring manufacturers to implement flow restrictors.

Keller and Heckman LLP - Azim Chowdhury, Sheila A. Millar and Boaz I. Green
﻿
Back Forward