Following the September 11, 2001, terrorist attacks in the US, it was expected that the property and casualty insurance industry would largely exclude coverage of losses from acts of terrorism. The Insurance Information Institute reports that by early 2002, 45 states had already approved express insurance policy exclusion language for acts of terrorism. Congress passed the Terrorism Risk Insurance Act in 2002 to ensure that insurance for losses from acts of terror would be generally available. The program established an infrastructure under which the federal government would provide a financial backstop to commercial property and casualty insurers that covered loss from certain terrorist attacks. Since 2002, the program has been reauthorized three times, most recently in 2015 through the Terrorism Risk Insurance Program Reauthorization Act (the 2002 legislation and subsequent reauthorizations, collectively TRIA). The current reauthorization is scheduled to expire on December 31, 2020.

Complex commercial insurance and real estate development negotiations often have long runways that last months or years. As a result, there has been broad-based pressure on Congress to deliver early certainty about whether TRIA will be reauthorized after 2020, and if so, what changes might occur in the program. In June 2019, the Senate Banking, Housing and Urban Affairs Committee held a hearing to consider reauthorization of TRIA. In October 2019, the House of Representatives Financial Services Committee unanimously approved reauthorization legislation, and the full House passed it on November 18, 2019, by a vote of 385 to 22 (H.R. 4634). On November 20, 2019, the Senate Banking, Housing and Urban Affairs Committee by voice vote unanimously passed out of Committee TRIA reauthorization companion legislation to the House bill, S. 2877. The reauthorization is expected to be passed into law and signed by the President. The timing of final legislative and presidential action is unclear at this time.

The key elements of TRIA are:

1.Insurers Required to Offer Coverage: Most commercial property and casualty insurance policies are required to offer coverage for losses from terrorist attacks on essentially the same basis as other losses under the policy. (For exceptions to this "must make available" requirement, see the TRIA Resources listed at the end of this article.)

2.Federal Financial Backstop: The federal government acts effectively as a reinsurer for carriers that cover losses from certified terrorist attacks.

3.Insurance Industry Risk Sharing and Caps: The federal backstop is available to insurers only after each impacted insurer has absorbed losses above certain thresholds. There is an absolute cap on the total cost of the program.

The Math for Federal Payments

TRIA's federal risk sharing formulas have changed over the 18 years of the program. Reauthorizations have gradually imposed significant increases in the financial thresholds that trigger federal payments to insurance companies. As Senator Michael Crapo (R-Idaho, Chair of the Senate Banking, Housing and Urban Affairs Committee) recently noted about the program, the goal of the gradual trigger increases has been to "find ways for the private insurance industry to absorb and cover the losses for all but the largest acts of terror, ones in which the federal government would likely be forced to step in were the program not there."

As of January 1, 2020, there are six key threshold triggers in the TRIA program:

See, 2020 TRIA Trigger Thresholds chart at the end of this article.

The TRIA program only applies to terrorist attacks that have been certified by the Secretary of the Treasury, following consultation with the Secretary of Homeland Security and the Attorney General. To be certified, an attack must be violent or dangerous to human life, property or infrastructure; result in damage within the US (or outside of the US if a US air carrier or vessel or on the premises of a US mission); and/or be committed as part of an effort to coerce the civilian population of the US or to influence the policy or affect the conduct of the US government by coercion. To date, no terrorist attack has been certified to trigger federal payments under the TRIA program.

The pending reauthorization legislation addresses several issues of particular interest to the insurance industry, most notably the length of reauthorization and the financial backstop trigger levels.

In addition to the studies expressly required under the reauthorization legislation, there are several issues to watch during this next TRIA authorization period. There is increasing discussion about the need to look at coverage for nuclear, biological, chemical and radiological (NBCR) events, and about the impact of a terrorist attack on workers' compensation and other lines of coverage not addressed by TRIA. The timing of mandatory federal recoupment has also begun to receive policy attention. We expect that the annual joint federal and National Association of Insurance Commissioners (NAIC) data calls on terrorism risk insurance will continue. Look for both the federal government and the NAIC to publish additional studies and recommendations over the next seven years. 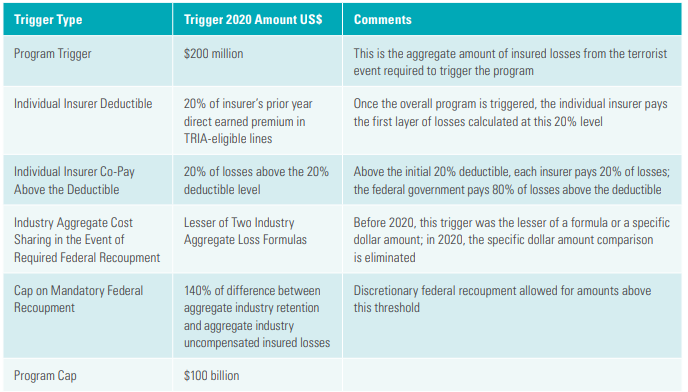