On October 29, 2018, the Patent and Trademark Office published a request for comments on a proposal to establish a new procedure by which patent owners may seek to amend their claims during inter partes review. Comments are due on or before December 14, 2018. The PTO proposes a pilot program implementing the new amendment process to begin shortly after the deadline for comments.

Currently, a patent owner may move to amend once, following institution of inter partes review. A petitioner may respond to such a motion, and the Board rules on whether to allow amendment as part of its final written decision. The Board may authorize an additional motion to amend when “there is good cause showing.” 37 C.F. R. 42.121(c) and 42.221(c).

The new process would permit a patent owner to revise its motion to amend following a preliminary, non-binding decision of the PTAB. The new proposal relies upon 35 U.S.C. 316(d)(2) which provides that the Board may permit additional motions to amend “as permitted by regulations prescribed by the Director.”

The new proposal would compress the current time frame for filing and responding to a motion to amend. It would provide for a preliminary ruling by the PTAB on the proposed amendment, to which both sides may respond prior to final decision.

Under the proposal, a patent owner would have six weeks following institution in which to file a motion to amend. The petitioner would have an equal amount of time to respond. The PTAB is to issue a preliminary decision within one month regarding the validity of the proposed amended claims.

If the PTAB’s preliminary decision is unfavorable with respect to at least one proposed substitute claim, the patent owner could elect to file a reply to the petitioner’s opposition. The petitioner would then be accorded the opportunity to file a sur-reply.

If the PTAB’s decision indicates that the Board is likely to permit amendment as to all proposed substitute claims, the petitioner would be accorded a right to file a reply to the PTAB’s preliminary decision. The patent owner would then be permitted a sur-reply.

The PTO has provided the following timeline to illustrate these various deadlines: 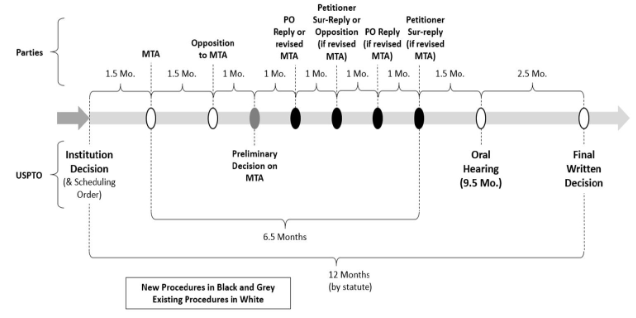 If adopted, these procedures are certain to increase the costs of the participants and the burden on the PTAB. No doubt those who comment can be expected to address the practicality (or impracticality) of the Director’s proposals.

The PTO has specifically solicited input on the following questions: