This insight provides a high level snapshot of trends from the AGMs of Australia’s largest public companies (ASX 100) over the course of three years from 2016 to 2018.

2018 saw shareholders deliver the highest ever 'against' vote rejecting a remuneration report (over 88.43%). Yet, there was a notable absence of second strikes and board spills in the ASX 100. 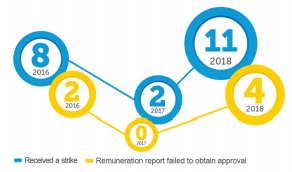 'In the last 3-4 years we have seen a shift in focus from regulators, investors and proxy advisers on ensuring there is accountability at the executive level to improve reputation and company culture from top down, pushing for an integration of culture and customer satisfaction within variable remuneration, and holding Boards accountable for ensuring good governance’.

'Votes “against” the 2018 remuneration reports of financial sector companies were influenced as much by companies’ responses to the Royal Commission reporting, as they were by key executive pay.'

'We have observed that companies who made a shift toward greater shareholder alignment through their variable remuneration have had less pushback on quantum – it’s a 'win-win' situation.'

Globally the focus on the importance of ESG and more particularly climate issues has been increasing over the past three years. In Australia, boards and regulators (APRA and ASIC) have identified climate change as a key risk. However, the number of shareholder resolutions, though increasing, remains relatively modest. 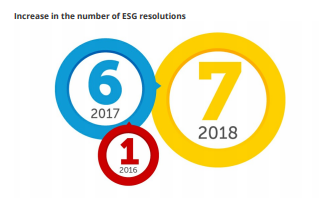 'The relatively low numbers of ESG resolutions that proceed to meetings and their failure to pass, is not necessarily indicative of a lack of investor concern. Rather, there are a number of factors at play. Chief among these includes the fact that, in Australia, the passage of such resolutions would necessitate a change to the company’s constitution, which is often a bridge too far for Australian shareholders hesitant to encroach on what they perceive to be management’s territory. In other jurisdictions such as the US, where constitutional amendments are not required, the number of ESG resolutions is higher as is their success rate. In addition, there is the associated difficulty of securing management support for ESG resolutions – though, even where resolutions are unsuccessful, concessions are sometimes made. Finally, successful engagement by investor advocates (such as the Australian Council of Superannuation Investors) on these issues outside of the AGM process also plays a role’

Possible barriers to the passage of ESG resolutions

Passage of a constitutional amendment appears unlikely to be supported