Each year around this time, the U.S. Government Accountability Office (GAO) publishes its annual report to Congress on bid protests. Earlier this week, the GAO published the report for Fiscal Year (FY) 2022. The following are the updated statistics at a glance, in the context of the four preceding government fiscal years: 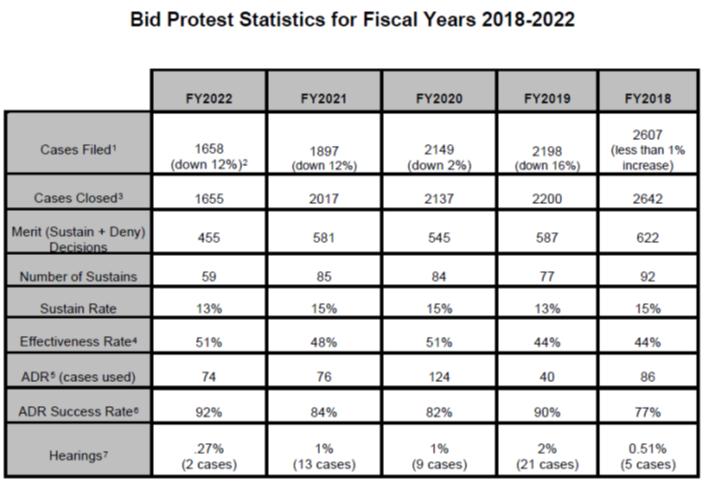 What the Numbers Really Mean

Before discussing trends, it’s worth observing that the reported numbers don’t mean what you probably think they mean. As the GAO emphasizes each year, the “case” tallies above reflect discrete “B-numbers” on the GAO’s docket, not the total procurements challenged or the total protests filed:

All entries in this chart are counted in terms of the docket numbers (‟B” numbers) assigned by our Office, not the number of procurements challenged. Where a protester files a supplemental protest or multiple parties protest the same procurement action, multiple iterations of the same “B” number are assigned (i.e., .2, .3). Each of these numbers is deemed a separate case for purposes of this chart. Cases include protests, cost claims, and requests for reconsideration.

For example, if an agency makes an award, and two disappointed offerors file protests, the GAO assigns two B-numbers:e.g., B-700000.1 and B-700000.2. If, as sometimes happens, one of those protesters files a supplemental protest to make additional timely arguments it did not have time to make within five days of the close of its debriefing, the GAO dockets that new filing as B-700000.3. After the agency produces the agency report, both protesters might add a few supplemental arguments based upon the new documents, leading to the docketing of B-700000.4 and B-700000.5. If the agency must produce additional procurement documents as a result, one of the protesters may file another new argument based on those documents, leading to B-700000.6. And, if the GAO ultimately denies the protests, one of the protesters may file a request for reconsideration (which almost certainly will fail), generating a seventh B-number. The annual statistics will report this as seven different “cases,” rather than one procurement that was unsuccessfully challenged, or two protests that were denied, which is what most casual observers probably think the numbers mean.So, in FY 2022 there were 1,658 “case filed,” which actually means far fewer than 1,658 protests were filed, and far fewer than 1,658 solicitations or awards were challenged.

Although news reports and government attention make it seem as if there is an epidemic of bid protests threatening most if not all federal procurements, these figures (like every year’s figures) demonstrate that is not so. Of all the vast numbers of contracts and task orders the U.S. government awarded in FY 2022, far fewer than 1,658 protests were filed against them—well below 1% of all procurements.

Continuing Drop in “Cases Filed” and Decisions on the Merits

Cases filed in FY 2022 fell by more than 200 (a 12% drop) since 2021, and 2021 cases filed had fallen by more than 200 relative to 2020. Because of the B-number method of counting, the actual drop may be more or less than 12% in the total protests filed or procurements challenged since 2021. But the consistent downward trend in “cases filed” over the last five years almost certainly reflects a decline in the total number of protests.

Note that of the 1,651 “cases filed” in FY 2022, only 455 resulted in written decisions on the merits.Most bid protests never make it to a full written decision on the merits—most end with summary dismissal, withdrawal by the protester, or voluntary corrective action by the agency. Although the report does not address at what stage of the 100-day protest lifecycle these non-merits resolutions occurred, historically most protests are resolved within the first 30 days of the protest period, before the procuring agency produces the agency report and supporting procurement record.

The reported “effectiveness rate” for FY 2022 was 51%.“Effectiveness” here means the agency took corrective action in response to the protest, either voluntarily or in response to a formal GAO recommendation. It does not mean that the protester ended up winning the contract it protested half the time. It does, however, reflect that in roughly half of all protests, the procuring agency goes back to correct real or perceived errors in the procurement process. This number has remained relatively steady (44%-51% over the last five years).

Hearings Are Rare as Hens’ Teeth

Consistent with the GAO’s goal of providing relatively expeditious and efficient resolution of protests, it is extremely rare for the GAO to convene a hearing.In FY 2022, only two “cases” had hearings. And, because of the way B-numbers work, it is entirely possible that the two “cases” were only a single protest.