PPH: All possibilites are not equal

Over time, accelerated examination programs under the PPH (Patent Prosecution Highway), have proliferated. But does this simplify the task of applicants when a first office considers certain claims to be acceptable? In addition to limitations associated with the fact that an accelerated examination under the PPH may only be requested prior to the start of the examination, it appears that the benefit of filing a PPH request varies according to the applicant's expectations, the country concerned and sometimes even the technical field of the invention... Rather than systematically filing PPH requests, a case-by-case analysis seems to be more appropriate for optimizing the examination of patent applications.

On the international level, there is a growing desire to harmonize, simplify and accelerate patent granting procedures, without affecting the quality of application examination. This desire exists within a challenging economic context that is pushing both offices and applicants to try to limit the costs of examination procedures.

It is within this framework that the development of bilateral and multilateral programs between patent offices, known as PPH programs (for "Patent Prosecution Highway"), is taking place. These programs, initiated by the Japanese Patent Office, are based on the premise that it is inefficient for both offices and applicants to begin the examination of a patent application in each country ab initio, in particular when an office has already concluded that certain claims are patentable before examination has even begun in another country. Thus, the offices participating in these programs offer expedited examination when a request for treatment under the PPH program is filed before the start of examination, on the basis of claims corresponding to those considered acceptable by a partner office (called the "office of earlier examination").

These programs do not guarantee that examination will be simplified, in particular because the provisions governing the assessment of certain patentability requirements differ from one country to another. However, the philosophy behind these programs is to limit examination as much as possible, and a certain level of simplification of examination can in principle be expected.

The opportunities for applicants to participate in PPH programs are therefore increasingly numerous. In this context, it is important to sort through the different theoretical possibilities and to select those that are likely to be of particular interest of applicants.

PPH programs can be divided into two categories:

Thus, on the basis of a positive opinion of one of the major patent offices, there are now many possibilities to request accelerated examination under the PPH before other offices. Are these possibilities all equal? This is the question we asked ourselves, and to which some elements of the response are presented below.

Despite the desire for harmonization, there are still many local specificities, which an applicant must consider in deciding whether or not it is appropriate to require expedited examination under the PPH before a given office.

First of all, the eligibility conditions of the office having issued a positive opinion vary among PPH programs.

The positive opinion may have been issued by the office of earlier examination as an International Searching Authority (ISA) or International Preliminary Examining Authority during the international phase of a PCT application, or in the context of national or regional examination. However, some bilateral programs only accept positive opinions issued in the national or regional stage (this is notably the case for the bilateral program between the

EPO and the Brazilian Office). The filing of a request on the basis of a positive opinion at the international stage is therefore not possible.

Eligibility requirements concerning the positive nature of the opinion of the office of earlier examination also vary from country to country. For example, while most offices consider that a positive opinion with regards to novelty, inventive step and industrial application is sufficient, this is not the case for the Chinese Office, which requires a complete absence of objections, including clarity and sufficiency of description.

Finally, other eligibility conditions of the PPH request may be required by certain offices. Indeed, the USPTO requires that an IDS ("Information Disclosure Statement") be filed.

One of the substantive conditions for eligibility of the PPH request is that the claims submitted by the applicant for expedited examination under the PPH sufficiently correspond to those considered to be acceptable by the office of earlier examination.

This condition will generally be considered to be fulfilled where, despite possible differences in the format of the claims, the claims to be examined under the PPH have the same, similar or narrower scope to those considered to be acceptable by the office of earlier examination.

The interpretation of this provision varies, however, according to the office. In particular, while most offices accept that multiple dependencies of the claims considered as acceptable by the office of earlier examination are removed to conform to local practice, practices differ between offices regarding the possibility of adding dependent claims or reformulating certain types of claims (such as therapeutic use claims) to another format.

Offices participating in a PPH program agree to expedite the examination of an application that is the object of a PPH request. Official statistics for certain offices for the period from July to December 2017 (available on the website of the Japanese Office at https://www.jpo.go.jp/ppph-portal/statistics.htm) confirm that the filing of a PPH request generally accelerates the examination procedure. However, this effect varies from country to country.

Thus, if the time from the filing of the PPH application to the first office action was less than or equal to 3 months in a number of countries, it is higher in other countries, particularly in the United States where it is closer to 6 months (see Figure 1). It should be noted, however, that in a country where the time from the filing of the examination request and the first office action is on average about 16 months and where other procedures for accelerating examination (e.g. accelerated examination or Track one) are expensive, the filing of a PPH request can speed up examination in the United States at lower cost. 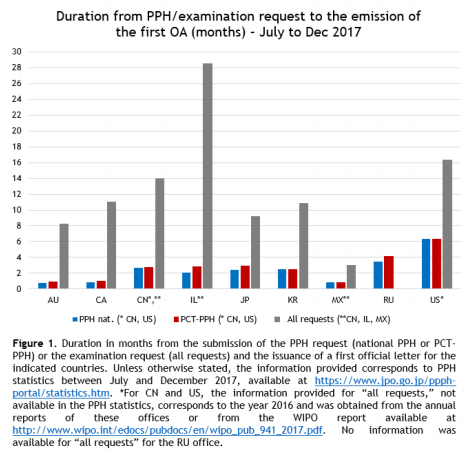 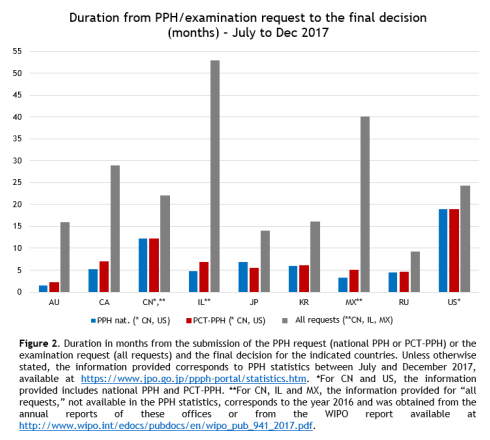 Effect of the simplification of examination

Official statistics provided for certain offices for the period of July to December 2017 also include data on the percentage of applications that are directly granted and the average number of office actions issued during examination.

Nevertheless, it is possible to draw some conclusions from the statistics made available by the Japanese Office.

This suggests that, for those offices conducting a complete examination, while the Examiner considering an application under the PPH takes the examination performed by the office of earlier examination into account, they still perform a complete examination of the application in view of national patentability requirements, evaluated according to local practice. In the absence of international harmonization concerning the evaluation of patentability requirements, it is therefore not surprising that only a very limited effect on the simplification of examination is observed. 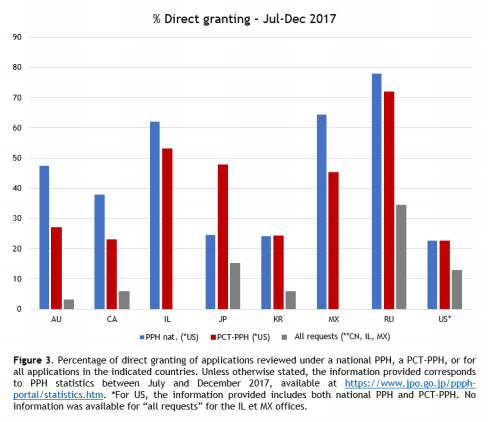 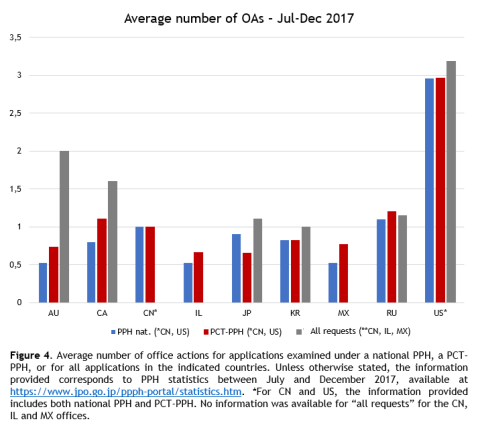 A contrario, a relatively high and in some cases even very high percentage of direct granting was observed between July and December 2017 for applications examined under the PPH in certain countries, such as Israel (>50%), Mexico (45-65% according to the PPH type), Malaysia (>75%), New Zealand (100% for PCT-PPH), or Russia (>70%). This suggests that filing a PPH request currently simplifies examination of a significant proportion of applications in these countries. In this regard, it should be noted that some of these countries also have modified examination possibilities on the basis of a granted patent (Israel or Malaysia) or are accustomed to relying on a positive opinion of an office conducting a complete examination (Mexico).

It therefore seems that the effect of simplifying the examination procedure varies from one country to another, with several countries considering earlier examination but still performing a complete and meticulous examination (with little or no simplifying effect), while others generally rely on a simplified examination.

In addition, our internal experience suggests that the effect of simplification of examination may also vary in some countries according to the technical field in which the invention is situated, adding yet another level of complexity.

In view of the above, it is apparent that while the range of possibilities has increased with regard to accelerated examination under the PPH, this does not necessarily simplify the task of applicants. Indeed, the eligibility conditions, the effects of acceleration and simplification of the procedure vary according to country, and in some cases the technical field.

Given that the filing of a PPH request represents an optional step, which without being excessively expensive nevertheless implies an additional cost, the situations in which such a filing is relevant should be carefully chosen.

Finally, if an applicant wishes to use the PPH procedure to simplify the examination of their application before a new office, they should limit themselves to a small number of offices, in which the filing of a PPH request seems to lead to a simplified examination.