An application was filed for the below word and device mark in Classes 16, 25 and 41. 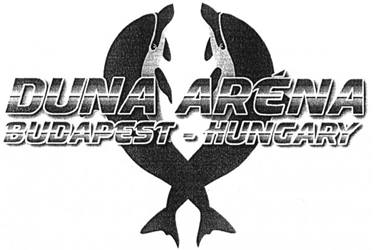 Hungarian National Asset Management Inc (HNAM Inc) filed observations against the application, claiming that the dominant element of the applied-for mark was the word combination 'Duna Aréna', which was identical to the name of a swimming arena that was under construction. The application in question had been filed at a time when the Hungarian public had known of the government's decision to build a swimming arena named Duna Aréna to host swimming and diving events and international competitions. HNAM Inc alleged that the applicant must have known about the arena due to its widespread publicity and held that the trademark in question would mislead the public.

The applicant argued that he had come up with the mark on his own and had had no knowledge of the planned arena. Thus, his behaviour when filing the disputed mark had been fair and correct.

The Hungarian Intellectual Property Office (HIPO) rejected the application. Although it did not accept HNAM Inc's second argument (ie, misleading the public), it agreed with its first one (ie, bad faith). In this respect, the HIPO held that the applicant ought to have known about the Duna Aréna construction project. Thus, the applicant had attempted to register a mark with the dominant element 'Duna Aréna' and charge a licence fee when the pool commenced operations. As it is in line with standard case law to examine the applicant's intention in bad-faith cases, this case reflects the HIPO's inclination to apply such evidence. Further, the HIPO held that it could not contribute to an abuse of trademark law.

Under Section 58 of the Trademark Act 1997, the filing of observations is a specific legal remedy available to any party (as opposed to an opposition action, which can be filed only by an interested person). Further, the term for filing observations relates to the date of registration (and is not limited to 60 days after publication of the application, as is the case for opposition actions). Thus, the aim of the observations procedure is to preserve the common interest.

As bad-faith decisions are rare in trademark cases, this decision would also be relevant in piracy cases.

During the observation procedure, the government successfully registered the word mark DUNA ARÉNA. Further, in July 2017 the 17th International Swimming Federation World Championships took place in the arena and, as a result of the significant media coverage thereof, the arena's name became internationally renowned.