IoT-related technologies are widely applied in a variety of are as such as smart homes, healthcare, automatic driving, and smart manufacturing, and may have a great impact on human life and business. Moreover, in China, IoT developments are also regarded as a fundamental part of the project Made in China 2025.

In most IoT systems, the original data and the processed data are stored and maintained in the remote servers, and such data is usually controlled by entities providing IoT services without effective supervision and limitation. Therefore ownership of original data and processed data become a critical issue. For example, whether the data should belong to the users or entities providing IoT services needs to be evaluated.

A predominant viewpoint on data ownership is that users possess absolute ownership of data, and entities providing IoT systems/services may have limited rights to use the data with explicit authorisation of the users.

Some researchers supporting this viewpoint focus on the notion of human property. They believe users own the data by the nature of human property, and entities providing the IoT service only have a limited right to use the data. Others supporting this viewpoint focus on human privacy. They believe if commercial entities own the data (e.g. portrait, account) without restrictions on their behaviour, actions taken by commercial entities may greatly damage human privacy.

Another point of view deems that commercial entities (providing IoT systems/services) that hold the data should own the data because of the effort and costs involved in collecting data from users and maintaining the data. As a result, such entities have legal rights to use the data.

From our point of view, we think those two viewpoints only focus on personal data, but data generated by IoT systems covers a variety of types of data. For example, environmental data gathered by IoT systems for weather forecast is irrelevant to users, and such data should not be regarded as human property and has no relationship to human privacy.

Therefore we think the discussion on data ownership should centre on data type. In our opinion, the original data of IoT systems/services could be classified into two main categories, non-personal data and personal data.

For the personal data personally identifiable, we agree that users possess absolute ownership of the data, and entities only have limited rights to use the data even with explicit authorisation from users. For processed data (e.g. statistics data), we think such data can hardly be regarded as human property of certain users, and has no risk relating to privacy issues. In this case, we think entities that substantially hold the data should have the right to use it for commercial purposes.

In summary, data ownership of IoT systems/services may be different according to the nature of the data, and further discussion on data ownership should be conducted around the specific data type of IoT data.

From a glance through the most promising technologies, we have every reason to believe that the IoT will become one of the hottest battlegrounds for patent litigation in the new era. For at least the following reasons, we find the IoT to be especially vulnerable to non-practising entity (NPE) enforcement or litigation.

Why is the IoT a vulnerable area?

Firstly, the technical aspects of the IoT are highly diffuse and it is easy for NPEs to find a point to attack. The IoT will penetrate every corner of modern society, from various industries to people's daily life. Meanwhile, IoT technologies cross over many different technical fields, such as sensing, communication and data analysis. Due to its ubiquity and the integration of different technical fields, the IoT promotes patent thickets. A product or service in the IoT ecosystem is likely to infringe many patents, and it is difficult, or even impractical, to perform a traditional freedom to operate (FTO) analysis in advance.

Secondly, there is a strong economic incentive for NPEs to enforce their patents in the IoT space, since the IoT is so lucrative. A forecast by Qianzhan Industrial Research Institute indicates that the market size of the IoT will exceed seven trillion CNY in a few years. This tremendous market potential could serve as a booster for NPEs to amass patents in the IoT arena.

Further, NPE-initiated IoT patent enforcement/litigation maybe even more prevalent in China. The fourth amendment to the Chinese Patent Law has had its drafting in progress and is expected to be put into effect soon, wherein an up-to-five-times punitive damage will be introduced and the upper boundary of statutory damages will be raised to five million CNY. A centralised IP tribunal was established in the Chinese Supreme Court at the end of 2018 to hear all appeals related to patent law suits. Judgments in favour of patentees awarding large amount of damages or issuing injunctions emerged in various courts in China. All these reforms/actions of judicial, legislative and executive branches to improve the IP protection environment, together with a relatively lower litigation cost, would be likely to make certain Chinese courts preferable forums for NPEs.

Now that there is a big wave of litigation in relation to the IoT, especially from NPEs, the companies practising in the IoT field need to consider this seriously and prepare in advance.

How can companies protect themselves?

Firstly, companies should consider working together for a joint defence against NPEs, in the form of a patent pool, for example. The agreement of the patent pool may involve certain terms to provide immunity for the parties joining the pool in the event that the patent is transferred to NPEs.

Secondly, offence is the best defence. A strong patent portfolio with high value patents will put the company in a favourable position to negotiate with other players in cross-licensing or a patent pool, and limit the patentable room for NPEs.

In addition to the above general proposals, there are still many other issues to be discussed. For example, although it is advisable to build a strong patent portfolio with high value patents, it is not an easy thing, especially in the IoT environment, where many issues, such as divided infringement, and eligibility are involved. The interoperability characteristics of the IoT means any SEP-related issues, such as FRAND will haunt the IoT, too. Also, the patent thickets characteristic of the IoT will make the royalty stacking issue even more prominent compared to the ongoing smartphone war.

As a summary, it is expected that the IoT will emerge as a hot bed for patent litigation, especially from NPEs, which calls for companies operating in the IoT sector to develop a full and smart strategy to solve the issues arising with wisdom.

3. Blockchain and the IoT

At one time, blockchain meant bitcoin and bitcoin meant blockchain. As an incorruptible digital ledger of economic transactions that can be programmed to record not just financial transactions but virtually everything of value, blockchain has become the rail across which innovators hope to innovate to bring transparency to data, logistics and the movement of goods and services. The IoT is facing a series of challenges when scaling from tens of billions to hundreds of billions in the coming years. Among these challenges, the cost of connectivity, the erosion of trust in the internet, and broken business models for connected devices stood out as hurdles already affecting IoT innovation. Since blockchain could provide a simple infrastructure for two devices to directly transfer a piece of property suchas money or data to one another with a secure and reliable time-stamped contractual handshake, blockchain may be the silver bullet needed by the IoT.

Intellectual property is always the launching pad into a real go-to-market effort. As blockchain becomes increasingly associated with vast applications (such as the IoT) well beyond bitcoin, activity measured in terms of patent filings has been on the rise. In view of the epic intellectual property battles across the world triggered by the arrival of the smartphone, the biggest players in manufacturing, tech, telecommunications and even finance are all vying for dominance in the patent race in the field of blockchain and the IoT.

China, as a major jurisdiction, is adopting a more positive attitude towards blockchain applications. In this regard, the CNIPA is studying and will update the examination guidelines for computer-implemented inventions so as to meet the emerging needs for intellectual property protection in new technical fields such as blockchain and the IoT.

Trends in the blockchain and IoT arena

When it comes to patenting blockchain and the IoT in China, the following trends are worthy of attention.

Firstly, the key issue involves eligibility. According to recent examination practice before the CNIPA, although the traditional three-element (using a technical means to solve a technical problem and achieve a technical effect) criteria has not been abandoned, a non-technical feature may also be included in the solution of a claim and even play a role interacting with and associated with the technical features when judging novelty and inventive step. However, non-technical features relating to finance are still sensitive and the solutions for financial purposes may be subject to more rigorous examination, thus applicants should avoid using terms such as bitcoin and virtual money, among others in the application documents.

Thirdly, when it comes to novelty and inventive step, blockchain and IoT related applications are the same as other applications.

It is to be expected that in the next few years, blockchain and the IoT will continue to be hot spots for patent applications. Clarity on the examination rules will be very beneficial.

Finally, let’s review some statistical data about IoT patents/patent applications (hereinafter referred to as patents collectively) in China. The data was obtained by Liu, Shen & Associates using the patent database Derwent Innovation and was extracted on April 30 2019. In addition, the data analysis is conducted based on the following understanding of IoT. 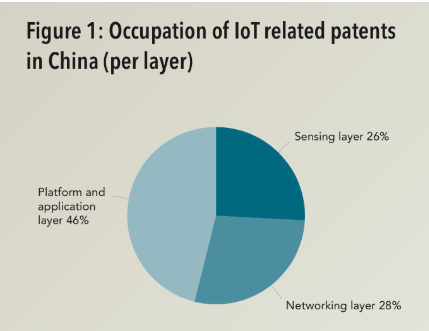 FIG. 1 shows the occupation of patents related to different layers of IoT technology in China. From FIG. 1, it can be seen that the largest portion is that related to the platform and application layer, while the numbers of patents related to the networking layer and the sensing layer are close to each other. One reason for such a ratio is probably that the platform and application layer involves applications of various industries, and it is relatively easy for different industries to find a way to get involved, while the sensing layer and the communication layer are relatively fundamental and focused on certain technologies. Further, although not shown in FIG. 1, it is noted that there is a significant portion of crossover patents among the three layers, showing the close relationship between the three layers in technology and the ambition of some applicants to make a vertical integration of the whole IoT technology. 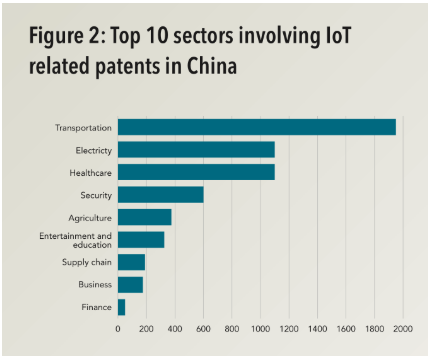 FIG. 2 is a diagram showing the top 10 sectors involving IoT-related patents in China. It can be clearly seen from FIG. 2 that IoT technologies can be widely applied in sectors that differ significantly from each other. Among them, the top three sectors are transportation, electricity and healthcare, which are exactly the hottest R&D sectors of IoT in China. 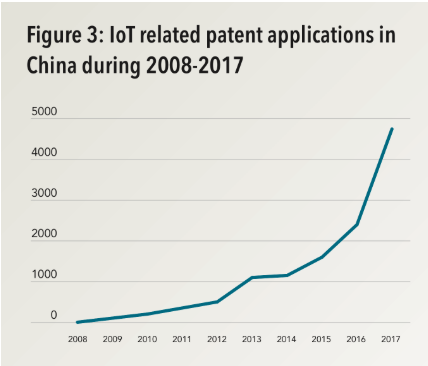 FIG. 3 shows the trend of IoT-related patent applications in China during 2008-2017. It can be seen from FIG. 3 that the number of IoT-related applications grows slowly until 2014. From then on, there has been explosive growth up until this moment. This is probably due to the breakthrough in IoT technologies, and also because of intensive policies launched by the Chinese government, aiming to boost the development of IoT-related industries.

In summary, as one of the most promising and lucrative technologies in the future, there is already a boom in the development of IoT in China, and the race to obtain IoT-related patents has started silently. Companies seeking to seize a share of the IoT market are advised to get started as soon as possible, to build a strong IoT patent portfolio.