Despite the protracted trade war and a fast growing compliance burden, a survey of 600 C-suite and Director level executives found more than 60% of mid-to-large sized companies operating in the Asia Pacific region still plan to increase international investment by at least 10 percent over the next two years.

In a new report from global law firm Baker McKenzie, The Age of Hypercomplexity: Asia Pacific Business and Legal Macrotrends, this detailed survey of business leaders in the world's fastest growing region offers a picture of executives who in the face of major geopolitical upheaval and protectionism appear more outward looking than ever.

In fact, more than half of Asia Pacific executives say they are 'far more interested' in pursuing cross border listings, M&A and other offshore investments over the next two years than they were over the past two years, with another 35% 'somewhat more interested'. This drive for international investment was being led by Japan, where a full 92% of business leaders plan on increasing international investment by 10% or more over the next two years.

In terms of where businesses wanted to invest, the survey shows a strong focus on South East Asia, the Indian Subcontinent and North America, while Europe (ex UK) as a whole also features relatively highly in current investment plans. The UK, however, does not.

When asked to name their three top investment destinations, only 1% of respondents across the Asia Pacific region cited the UK. Not a single respondent of the 200 corporates based in HK/China or the 100 based in Australia said that the UK was one of their top three destinations. Respondents across Singapore, Malaysia, India and Japan were almost as uninterested in the UK.

"We are entering a new era of multilateralism in Asia Pacific, one that no longer necessarily includes Western institutions. With macro plays such as the Belt and Road Initiative, the CPTPP, further ASEAN integration, Japan's outbound activities, India's Look East and Taiwan's Southbound policies, to name just a few, we see governments and large corporates in Asia increasingly working hand in hand to further geopolitical goals through trade and investment, often in consortia of small groups of nations with shared interests. Much of this interest now centres around South East Asia."

The US-China trade war is also having a major impact in the Asia Pacific region, with 48% of businesses surveyed making major changes to how they manage their production and supply chains, while a further 12% are completely transforming their supply chains. Unsurprisingly, this was being felt most acutely in Hong Kong and Mainland China. 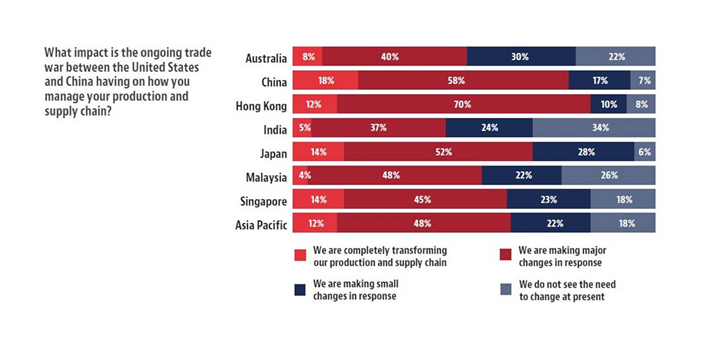 However, the trade war was not the biggest macroeconomic challenge those surveyed faced. Asia Pacific executives very clearly identified compliance and regulatory scrutiny as their number one issue, overtaking challenges such as tech disruption, costs pressures and economic uncertainty, a trend that is starting to fundamentally reshape business decision making. Compliance and regulatory scrutiny was also the leading driver of cost increases for businesses right across the Asia Pacific region.

Mrs Wong continued: "On the regulatory front, lawmakers in the Asia Pacific region continue to grapple with the consequences of rapid globalisation and technological advancement, with the wave of new regulation that followed the financial crisis now resulting in a spike in enforcement. This is starkly borne out in our research, in which regulation and compliance has shot to the top of the list of business challenges in every Asia Pacific jurisdiction we surveyed."

There was also further bad news for the UK. Corporates were also asked how much economic influence they expected various countries or regions would have in the Asia Pacific region in five years time, compared with today. While unsurprisingly China and India were both seen as countries whose influence would significantly increase across Asia Pacific, and the EU ex-UK would increase modestly, three quarters of respondents said that the influence of the UK itself would either be flat or decline.