Using a NoSQL data store and an RDBMS to provide performance improvement in a database system: technical

The European Patent Office considered using a NoSQL data store and an RDBMS to provide performance improvement in a database system technical. Here are the practical takeaways from the decision T 1924/17 (Data consistency management/ACCENTURE GLOBAL SERVICES) of 29.7.2019 of Technical Board of Appeal 3.5.07:

The application underlying the present decision relates to data consistency management and aims at achieving scaling using cloud computing for applications relying on a relational database as the data tier to provide transaction support and to ensure data consistency (EP 2 735 979 A2, para. [0001]). The purpose of the invention is explained by the Board in charge as follows: 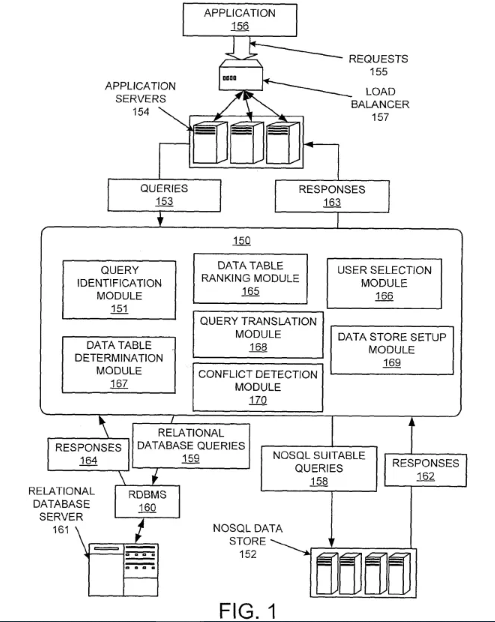 1. A data consistency management system (150) determining whether to forward a query to a not only structured query language (NoSQL) data store (152) or to a relational database management system (RDBMS) (160) by monitoring database queries issued by an application, and identifying data tables with query patterns that are suitable to be managed by the NoSQL data store (152), the system (150) comprising:

a data table determination module (167) automatically determining which data table [sic] are to be managed using the NoSQL data store (152);

determining whether the query (153) is a select query that selects data from a data table via a primary key (281) of the data table, the query matching a key-select pattern (181); and

determining whether the query (153) is a select query that aggregates a single column of a data table, the query matching an aggregation pattern (182);

based on the ranking, determine, by the data table determination module (167), data tables from the ranked data tables that are to be managed by the NoSQL data store (152), or by the RDBMS (161);

determine, by the query identification module (151), whether the query is for at least one data table managed by the NoSQL data store (152); and

a processor (402) to execute the machine readable instructions.

Particularly features like “key-value store” and “column store” were considered as data structures which could not contribute to inventive step:

6. Features like “key-value store” and “column store” were “data structures” and, hence, merely static memory configurations not contributing to the technical character of the invention (see point 3.2 of the contested decision).

Importantly, the Board in charge did not agree with the examining division’s identification of technical and non-technical features in claim 1. With respect to the features of “key-value store” and “column store”, the Board pointed to paragraphs [0019] and [0032] of the application as filed in which such data stores are correctly described as systems:

9. (…) As correctly stated in the application, paragraphs [0019] and [0032], NoSQL data stores including keyvalue stores and column stores are non-relational database management systems. A database management system is not a data structure, but a software system for storing, retrieving and processing data which typically uses various data structures for the efficient management of data. Hence, these systems are not merely static memory configurations, they implement methods operating on the data and the data structures to query the data, for example. Thus, the reasoning of the contested decision is not convincing.

Notably, in order to assess the issue whether and to which extent claim 1 contributes to the solution of a technical problem, the Board in charge reviewed a plurality of decisions of the boards of appeal in the field of information systems. A first group of reviewed decisions concerns inventions related to accessing data in database management systems and, in particular, the processing of structured queries for this purpose, whereas a second group of decisions relates to the field of information retrieval. The decisions of both groups are briefly summarized in the following:

11.1 In decision T 1242/04 (OJ EPO 2007, 421), the invention according to claim 10 related to a system for providing product-specific data in a service station. (…) Hence, this decision identified not only the central database for storing and providing data as a feature contributing to the solution of a technical problem (in combination with the other listed features), but also the computer program communicating with this central database and an archive store.

11.3 The invention in decision T 862/05 of 20 February 2008 related to an electronic sales and service support system intended for banks. (…) It follows that the competent Board regarded a central database, means for searching this database and means for building structured queries as technical features of the invention.

11.4 In decision T 658/06 of 25 November 2010, the invention concerned recording and managing bonus points for telephone users. (…) Hence, the competent Board considered database operations (…) as conferring a technical character on the claimed method.

11.5 The invention in decision T 1500/08 of 4 November 2011 related to the automatic generation of formally specified structured queries for a database management system based on the user input received. (…) The technical effect was that, sometimes, a previous search could be reused by the database server (see reasons 5.8 and 5.9). (…)

11.6 According to the background section of the patent application underlying decision T 963/09 of 5 June 2014, conventional database systems typically provided a general auditing facility that recorded an audit trail containing general information about the user and the query issued. (…) Evidently, the competent Board considered database accesses in general (see point 7.6 of the reasons) and the specific implementation of rowbased selective auditing in an RDBMS, in particular, to be technical.

11.7 In decision T 104/12 of 8 September 2016, the invention concerned a method of extracting data using a database view query from an online transaction processing system to a data sink. In point 3.8 of the reasons, the competent Board acknowledged that implementing the execution of a database view query was a technical problem.

11.8 Decision T 1965/11 of 24 March 2017 concerned the optimisation of structured queries to an RDBMS in the presence of materialised views. (…) This decision makes it clear that query optimisation in an RDBMS is considered as contributing to the technical character of the invention.

12.1 Decision T 1569/05 of 26 June 2008 concerned an information retrieval system for retrieving images using textual descriptions of the images as searchable metadata. (…) Hence, the competent Board confirmed that retrieval from a database was normally considered as having technical character. However, it regarded the mathematical model of meaning used to define and calculate the similarity of images via their textual descriptions as non-technical.

12.2 In its decision T 1316/09 of 18 December 2012, point 2 of the reasons, the competent Board considered a method or a combination of methods of text classification per se as not producing any relevant technical effect or providing a technical solution to any technical problem.

12.3 In decision T 309/10 of 19 June 2013, the invention concerned the archival and retrieval of documents. The competent Board considered that the core method of retrieval could well be performed without the technical aid of a computer and by a librarian solving the non-technical problem of storing and locating books (see reasons 9 and 10). (…)

12.4 Decision T 598/14 of 6 November 2014 concerned a method for generating, from an input set of documents, a word replaceability matrix defining semantic similarity between words occurring in the input document set. (…) The Board is convinced that no such “further technical considerations” can be found in the present case. As explained above, the translation simply reflects the linguistic aspects in the mathematical model. (…)

12.5 Decision T 2230/10 of 3 July 2015 states in its reasons, point 3.10, the following: “The Board […] does not accept that the algorithm is based on technical considerations in that it has been purposively designed with a view to the relevance to the user of the search results obtained, as this relates to the cognitive content of the returned documents.”

Hence, this decision regarded certain considerations relating to the cognitive content of the documents as non-technical.

In view of the above-presented decisions, the Board in charge summarized the situation with respect to the technicality of query processing in database management systems and information retrieval systems as follows:

Information retrieval systems typically have to formally calculate a semantic similarity of documents, which is typically regarded as involving non-technical considerations and being based on subjective criteria and the content (semantics) of the documents to be retrieved.

In view of the above, there is no contradiction in the case law relating to retrieval of data from database management systems and to information retrieval. Rather, the different judgments of the technical character of the features of these systems reflect the different kinds of considerations in the different fields.

As a result, the competent Board concluded that many aspects of processing structured queries in database management systems are to be regarded as technical. Hence, the subject-matter of claim 1 according to the main request of the underlying application adequately defines a system that solves a technical problem:

14. (…) In particular, improving the efficiency of executing structured queries to, or improving the throughput of, an RDBMS by automatically managing the data in various data stores with different properties and exploiting the different performance characteristics of these data stores for enhanced query processing solves a technical problem.

Interestingly, the competent Board further investigated what may have led the first instance examining division to wrong conclusions regarding the identification of the technical and non-technical features of claim 1. The Board of Appeal was particularly concerned that the linear combination “rank(t) = λ1 rp(t) + λ2 kp(t) + λ3 maxc(ap(t,c))” as claimed may have caused the examining division to regard individual features of claim 1 according to the main request as non-technical. In this respect, the Board in charge examined how Article 52(3) EPC has to be understood that defines that particularly computer programs are excluded from patent protection only “as such”. After a comprehensive discussion of this aspect, the Board concluded as follows:

19.3 (…) In the Board’s view, the context provided in Article 52(1) EPC, i.e. the limitation of inventions to all fields of technology, makes it clear that methods applying mathematics in a non-technical field are generally excluded from patentability (unless they use technical means, see decision T 258/03, EPO OJ 2004, 575, headnote I, according to which a method involving technical means is an invention within the meaning of Article 52(1) EPC). However, where mathematical features of an invention contribute to the solution of a technical problem, such mathematical features cannot be ignored when assessing inventive step. (…)

In view of the above, the Board concluded that the features of claim 1 referring to the above-mentioned linear combination are based on technical considerations:

20.1 In the present case, as the mathematical features concerning the linear combination, E3a and E3b of claim 1, contribute to the automatic determination of which data tables are to be managed by which type of database management system, they play an essential role in the technical functioning of the system and consequently serve the overall technical purpose of claim 1. Furthermore, these features are based on technical considerations concerning the functioning of the database technology used. Hence, they contribute to the solution of a technical problem and have to be taken into account when assessing inventive step.

21.1 (…) By contrast, in the present case, the speed comparison was made with respect to a particular prior art, i.e. document D1.

21.5 The Board agrees with the appellant that the claimed system is based on “further” technical considerations that concern a specific manner of improving response times for queries by automatically using different data stores, relational database management systems and NoSQL data stores, to manage data tables. (…)

It follows that the Board does not share the Examining Division’s conclusion that achieving data consistency levels was a “result of human requirement” and independent of any technical necessity.